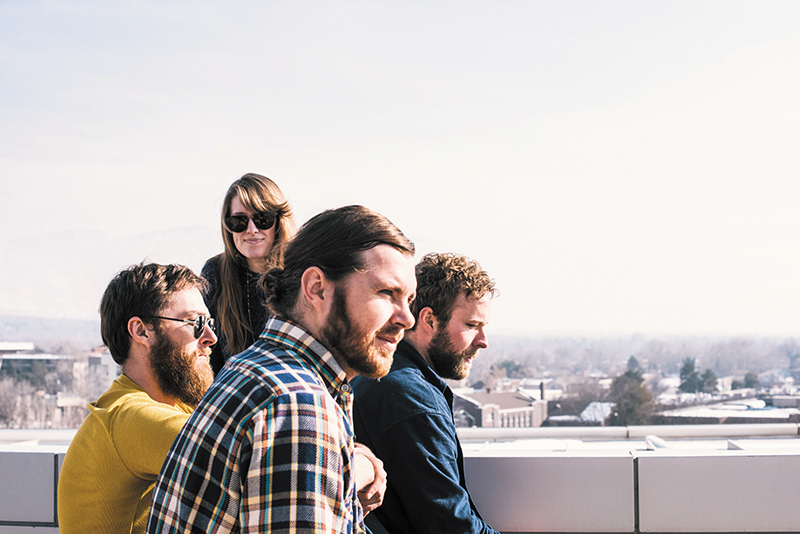 This month’s Localized features an array of reinvented classic American music groups. Michelle Moonshine kicks off the show with her imaginative and stirring Americana folksiness. Following are the Southern rock–infused, and swooning country darlings June Brothers. Rounding out the show will be modernized, blues-entrenched, recalcitrant and untamed resident favorites Crook & The Bluff. The event is on March 17 at 8 p.m., with sponsors Spilt Ink, Uinta Brewing Co. and KRCL 90.9 FM.

Folk and Americana are well-established American traditions, especially here in the Intermountain West. June Brothers possess a singer-songwriter aesthetic blended with alt-country and a lot of heart. Spencer Oberle began June as a soloist with a rotation of performing artists in a backing band. Now, Alex Winitzky has joined on mandolin and banjo, Julie Riding on auxiliary percussion, and Todd Christensen on electric and pedal steel guitar. Their combination of sweet harmonies and twangy fervor will get your body a’swaying.

On June’s first release, Meet Your Creature, Oberle was the sole writer and continues to write from an experiential place. “Most of my songs come from personal experience,” he says. The added influences of three new permanent members have, however, provided a depth that wasn’t previously possible. “What we are doing now is a lot more collaborative,” Oberle says. “I like having them to bounce ideas off of.” Their writing process is accommodating and cooperative. “Usually, one person has an idea for a song, and then we all work on it together from there,” says Oberle. This process provides a range of influences that you could never achieve with a single person.

June Brothers’ music is emotionally charged, and lyrical focus is essential. “In order to know where the song is going, you need to have a distinct direction from the lyrics,” Riding says. Their singer-songwriter perspective has given them a playful view of their music. “We’re like a shitty version of Neil Young,” Christensen says, joking. “If Neil Young was a 10, we’re a four.” Along with lyricism, their backing instrumentation tends to be emotive rather than convoluted and technical. “We spend a lot of time thinking about textures and not trying to get too complicated about anything,” Christensen says. This dichotomy portrays a benign sincerity often lost in other genres.

From June Brothers’ experience, the music scene in Salt Lake can be cliquey and exclusive. “I feel like [Salt Lake] is more compartmentalized than other places,” Winitzky says. “Everyone is very devoted to their own thing, and they don’t collaborate or communicate much with each other.” This can be found in many scenes, but the categorical youth lifestyle in Utah has a big effect. “The counterculture in Salt Lake is so strong that it forces grouping,” says Christensen. June Brothers are considering moving to another location to broaden their horizons, but for the time being, they’ll be smashing down clear-cut social group barriers locally.

The ensemble has recently returned from a tour that was the culmination of many previous small excursions. “We had been touring together for a year in mini weekend trips,” Riding says. “We went on our main tour in September for about three weeks.” Similar to many bands from Utah, their main focus was on surrounding states. “We hit Oregon, Colorado, Moab and Wyoming,” Christensen says. “We focus on touring around this third of the country.”

June’s on-the-road adventures were rooted in oddities, including a young girl going full zombie and scrambling around a venue backdoor blithering nonsense to them. The most disturbing exploit was a veritable Tucker and Dale vs. Evil escapade (minus the death and mayhem). “A really handsome guy overheard us talking at a bar and told us we could come stay with him at his house [in the woods],” Winitzky says. “On the way up, all cell service cut off completely, and he said, ‘I live here alone.’ He had this one tiny, weird, elevated room with nothing in it but an alien sculpture and a disco ball.” After spending an entire evening thinking they were going to die, they awoke and realized they were staying with a delightful man in a charming Oregon cabin.

June pride themselves on their live performance. “As this band unit, we have only played live,” says Winitzky. Their performances incorporate a revitalized selection from Meet Your Creature, as well as some new ditties. “Our sets have become more intimate and acoustic so that you can hear more layers,” Oberle says. Along with adjusting the overall aural impression, they have excluded full percussion. “We’ve completely eliminated the drum set so that you can hear more nuances,” Winitzky says. The adaption to auxiliary percussion affords a cozier ambiance.

In the end, June is willing to put some muscle into their music. “I can bench 100 pounds,” Winitzky says. Along with this impressive feat and drawing from the encounters of Robert Johnson, June will do “anything” for fame and fortune. “I’m down to sell my soul for a Grammy,” Christensen says. If you want a group with a droll sense of humor and an lovely way of conveying their spirit through the power of song, June Brothers should be on the top of your list. All relevant information as well as Meet Your Creature, can be found on junebrothers.com. This month’s Localized offers the rare treat of opposing extremes of American music—don’t miss out!