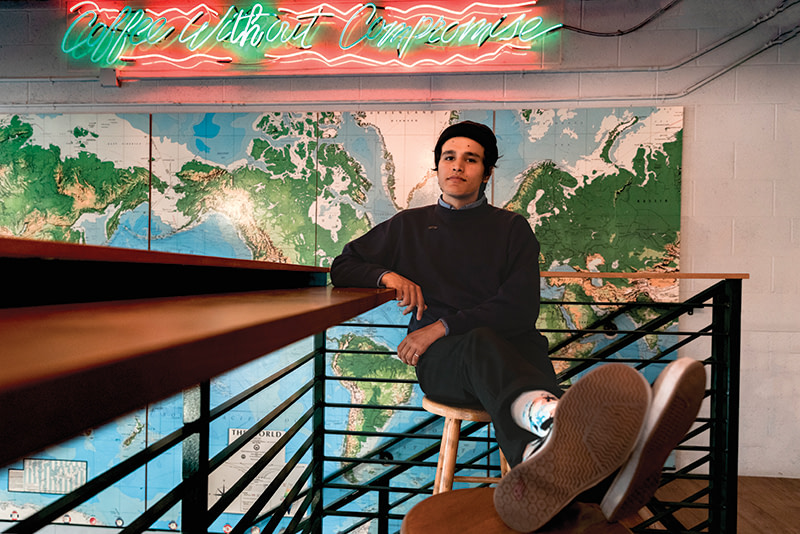 What does it look like to create art that conforms not to the expectations of the world around you but to your own vision of what art should be? Find out at our August SLUG Localized showcase—these three acts’ influences collide onstage to create sounds that are wholly unique and authentic in the truest senses of these words. Opening for Marqueza and June Pastel is Jazzy Olivo, who, true to her name, offers up lively jazz fusion. For a sweaty, sexy, jazzy summer night, join us at Urban Lounge on Thursday, Aug. 15 at 8 p.m. for $5. SLUG Localized is sponsored by Uinta Brewing, High West Distillery, and Spilt Ink SLC.

Anthony Peña can trace the path of musical inspiration that led him to where he is now—it started with ABBA. “I scratched my ABBA CD very heavily,” he says. Then The Bee Gees, then a seminal moment with Michael Jackson: Peña remembers turning on a music video compilation before school—and not making it to school at all, transfixed by the spectacle that was Michael Jackson. The CDs were the byproducts of an immigrant family who, as Peña puts it, “were just taking whatever was handed to them.” Peña’s parents had moved from Venezuela to the U.S. right before he was born, settling on the West Side of the Salt Lake Valley. Along with the pop of the ’80s, the Peña home also echoed with the songs of traditional Venezuelan folk singers.

At age 10, Peña had learned to play guitar, and after a few more years, he’d enrolled in the Peabody Institute, a classical music conservatory at Johns Hopkins in Baltimore, Maryland. “It was either go to school or go on a mission,” Peña says—he chose school.

In between learning to play guitar and enrolling in music school, Peña put out his first solo project at 16. The next year, he formed June Pastel and released a five-song, hard-copy-only EP through Albatross Records. Peña says that the impetus for moving away from recording under his name came from a desire to “create space and space away from me. That’s one thing I’ve been really self-conscious about, is just putting too much of myself on the line.” In other words, June Pastel is a dropbox, a place to store and shape ideas. “It’s a space that I can go into and put my own opinions and thoughts and then step away from it,” Peña says.

“It was either go to school or go on a mission.”

Peña came up in the Salt Lake music scene that was welcoming to newcomers, to kids just trying to figure out how to make and perform music. “In the time that I was growing up in Salt Lake, there were so many cool bands around and people just doing it themselves. That was such a formative time for me. I just wanted to be like the cool kids!” he says. Music school posed a particular challenge in that he was one of the few students infusing his work with a DIY ethos: “It took a while to feel that what I was doing was valid in that environment,” Peña says. “I’m kind of the odd one out there, in the sense that I’m not engaging with classical spaces or halls.” He’s not writing classical music, and he’s not creating within classical forms. “I love pop. In my academic world, everyone’s pushing the edge hardcore. They’re 2073. There are a lot of people who want to write pop, and they’re two years behind, so I want to find that sweet spot,” Peña says.

Collages, June Pastel’s first album released last June, was built over three years of cross-country travel, time spent reworking and fine-tuning songs and building relationships with other artists. The record is an expansive collaboration that includes at least 14 contributors, a sweet melding of sax-heavy jazz and yearning indie pop. Peña describes the years leading up to the album as “a three-year period of chasing perfection,” during which he was “burning through these phases of what I thought it meant to be a musician.”

“I haven’t been able to shake my passions, and maybe that’s why I have been consistent.”

Over the last year, however, June Pastel has evolved. Peña, now 22, has whittled the core members down to five, mostly Baltimore-based musicians: Andrés Escobar (synths, percussion), John Murphy (bass), Kayin Scanterbury (drums) and Sean McFarland (guitar). He says the band’s new songs lean in a less calibrated direction; practice sessions sometimes sound like a mix of Prince and My Bloody Valentine. “Life is so busy. Having to chase this idea of what it means to make a record can put you out of so much money, time, and honestly, it might not match with the level you’re at, skill-wise. For these new recordings, I recorded it myself with my microphones. I’m going to mix it myself,” he says. “To me, it seems that everything requires this next level of perfection, and that’s unhealthy, unsustainable. So we’re being really radical with it right now, just to build from the bottom up.”

This new phase of music-writing Peña sums up in four words: “Being honest is easier.” This means letting the music lead him. It means holding onto sincerity and authenticity despite the pressures of making music in the era of late-stage capitalism and technological disruption. It means staying true to his work, maintaining a through line that can be traced through his music. “I haven’t been able to shake my passions, and maybe that’s why I have been consistent, because I always just keep coming back to playing shows, setting up shows, getting bands together and building community through that means,” Peña says. “This is the take that we got, and probably a lot of it is what needed to be said. I’m not going to try and force any message across, you know?” Come see for yourself at the August SLUG Localized at Urban Lounge Aug. 15 at 8 p.m.