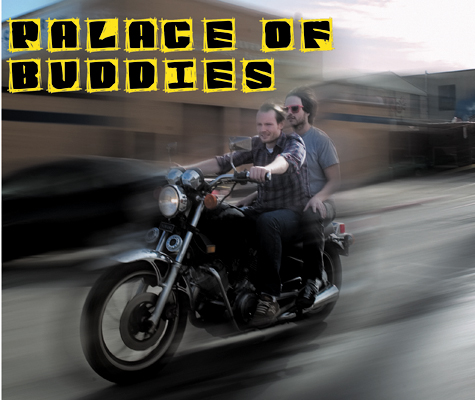 This month SLUG’s Localized presents two bands willing to take substantial risks for their art. Check out Palace of Buddies, Birthquake and openers The Buttery Muffins at Urban Lounge on Friday, May 8.

I was immediately struck by the cover art of Palace of Buddies’ CD.  The album’s front shows a garish birthday cake made sinister by shadowy horror-movie lighting.   The Salt Lake music scene nearly lost Palace of Buddies to fire during the shoot for the album art.  “We thought we had sparkling candles,” the two say, “but instead these candles shot flames.”   The back of the album offers the listener a view of POB’s equipment, a Charydis of keyboards, drums and wires that bring to mind nightmares of moving day. Far easier just to burn everything than take it carefully apart.

A willingness to navigate through the hazards of making art is a central tenet of POB’s approach to music.  Foster, who has a degree in Music Composition from the University of Utah, discussed works of Milton Babbit, Luciano Berio and Paul Lansky––who he discovered through his studies. Part of what compels Foster about these composers is the novelty of what they were doing.  “They wrote pieces that combined traditional symphonic instruments with newer electronic instruments at a time when there were no set rules to follow,” says Foster. The results were experimental, by definition.

This struggle to produce the new, first by hearing it and then by rigging it into reality, is very much a part of the POB experience.  Myers says he creates ideas in his head and then develops “oblique strategies” to turn them into fully developed songs.   They adopt this phrase from Brian Eno, whose albums Another Green World and Before and After Science are crucial listening for them.  Both Foster and Myers mention the various pros and cons of being a two-piece band.  There are only so many hands and feet to go around. Yet at a time when it has become increasingly acceptable for even respected bands to play prerecorded music during shows, POB is clear about its commitment to perform their music live.  “We needed to relearn to play our instruments,” says Myers.  He and Foster switch gear not only between, but also during songs, one playing the bass part for verses, for example, and the other picking up the bass part for the chorus.

What’s remarkable about POB, though, is the band’s ability to produce a fully integrated sound.  For all their mad-scientist scrambling with respect to ideas, equipment and sound, Myers and Foster feel like a genuine band, not just a couple of geeks with too much equipment. This is probably because the two have played together since junior high school.  Having passed through the ranks of various rock and metal bands, POB has finally reduced its sound to a neat blend of Kraftwerk’s Autobahn, the lush chords of early, experimental Genesis (Foster admires the drumming of the young Phil Collins), and the rag-and-bone clatter of Tom Waits.

I met the men of Birthquake at Coffee Garden and was quickly taken by the intense feeling of comraderie exuded by a band which has formally existed for only six months.  The secret to this solidarity is no real secret though.  It’s the brothers Whittaker.  Scott, Nick and Matt Whittaker have been playing together, musically and otherwise, since early childhood.  The three scooted close together to form one solid wall of grinning, beaming Hobbits.  Each seems the others’ greatest ally and friend for life. Joining this trio to form a full quartet is flautist, yes flautist, Mark Herrera, a mighty fortress of good will.

Despite his imposing presence, one can’t help but ask Herrera the obvious: “What’s up with the flute, buddy?”  Herrera, for whom piano moving, seems a far more obvious choice, replies without self-consciousness.   “I am comfortable with my manhood.  I do not listen to Tull.”  Herrera’s influences are more based in jazz.  He enthuses over the recordings of Eric Dolphy, the early work on Oliver Nelson’s legendary Blues and The Abstract Truth, as well as the later solo projects.  Herrera also cites Herbie Mann as an influence, and most recently, classical music.  Herrera describes himself as self-taught and sees his greatest strength as bringing even more heart to Birthquake, rather than a conservatory background or monster chops.  The Whittaker brothers smile brightly and use their eyes to pronounce a silent collective YAY!  This is that kind of giant-killing band.

Although Birthquake is an instrumental group, they still feel like it has vocals.  “We’ve got Mark’s flute and saxophone for that,” Scott says.  He recruited Herrera into Birthquake quite recently.  The two had been working together at a day job and discovered an increasing number of common interests. All three Whittakers had determined that Birthquake was still missing a certain je ne sais Jean-Pierre Rampal, so  Herrera was brought in on an experimental basis.  “It was not long though before a good thing became permanent,” Scott says.

Much like the late-bebop that Herrera relishes, Birthquake’s sound is stripped of all filler. Herrera describes it as “boiled down to bone and marrow.”  Perhaps this abstractness stems from Herrera’s love of mathematics, which he received extensive formal education for.  “What I learned from math was to impose structure on the world.”  It seems to me that this translates, in the musical idiom of Birthquake, to imposing structure on a groove.  Because, for all their leanness, Birthquake has something not especially common in the Salt Lake music scene––groove.  The band rocks with soul. It’s apparent not only to their growing number of local fans, but also to visitors to Salt Lake.  Scott recalls being stopped after a show by a group of Californians that had been drawn into the Urban Lounge by the sound of Birthquake spilling over into the street.  Scott says, “They told me they had no idea there was music like us in Utah.”

The members of Birthquake take great pleasure in the diversity of the local culture scene, in terms of both music and the other arts.  They recall not with nostalgia so much as keen enthusiasm the underground of the early-90s.  “There were dozens of tiny venues,” Scott says, “and all kinds of bands mixing all kinds of genres.”  The members of Birthquake have tried to maintain that eclectic innovative feel, mixing rock, funk and even country elements into their music.  “The day we get an identifiable sound, we’re done,” Herrera says.
Checkout the playful nature of both bands with openers the Buttery Muffins on the second Friday of May. Five bucks gets you in.