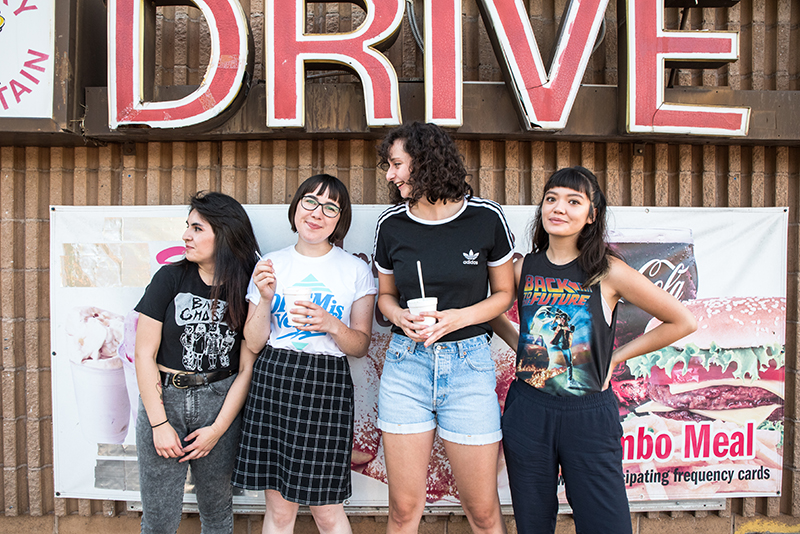 Hot, late August nights are the perfect time for shows that buzz with energy, and that’s exactly what will be delivered when Madge’s electric noise-pop joins the surfy, summery garage rock of Peach Dream and openers Dream Slut. Needless to say, this will be one dreamy Localized, so come bask in the haze at Urban Lounge on Aug. 16. The show is 21-plus and free, thanks to our sponsors: Uinta Brewing, High West Distillery, KRCL 90.9 FM and Spilt Ink SLC.

Sarita Ford, flashing a hang-loose sign, says “I think, then and now, we’re still all about having fun.” The “then” is Peach Dream’s roots in MedusaFest, a show put on by Studio Studio Dada where individuals were scrambled randomly into bands before performing quickly constructed songs. Peach Dream were, according to them, one of the only groups to exist beyond that performance at Studio Studio Dada, and since that time a year and a half ago, they’re still the same band with a few minor changes to their beachy, catchy garage rock.

These changes come by way of experience. Shelly Rose explains that in the beginning, they were all too scared to play drums, and Emma Lynn adds that if you missed practice, your punishment was that you had to play drums. But after a year of writing and playing songs, Lynn says they’re all more confident, especially in the drum department. Switching around instruments has become standard for the Peaches. It’s something that’s helped them all learn their instruments better and has become a part of their approach to making music. Paula Bravo says, “There doesn’t have to be this hierarchal structure to your band. Everybody can play whatever the fuck they want.” While they rotate out on obvious things like vocals, they’re also working with non-standard gear—that is, tiny stuff. Bravo beams about their tiny amps, and Rose expresses how much she loves showing up to venues with their tiny gear in tow. Ford adds that tiny gear is a little easier on the ears, too, describing the typical volume at venues perfectly: “Turn it down! I can feel the hairs in my ear canals flattening … Like, stop.”

Smaller gear protects delicate ears and probably prevents tinnitus, but Lynn describes why using this kind of gear has been important for not only them but for others, too. “I think it’s also really important [that we] started out not really knowing what we were doing, and [that] kind of makes it more accessible for people,” she says. “You can have kind of crap gear and not know how to play drums and still figure it out and make fun music.” Peach Dream’s music is fun and accessible, but as Rose points out, it can also be vicious. In reference to the song “Heck Off” (a stand-in title that Lynn kept for lack of a better one), Rose says, “You play that song for someone you want to make cry.” She adds that, though Lynn is the quietest member of the band, her songs are always the most deep-cutting. Peach Dream’s sound is bright and sunny, but listening to the lyrics reveals the tough and angry feelings beneath those garage-pop inclinations. Really, there’s nothing like a breakup to make a catchy song. Rose says, in at least half-seriousness, “I want people to drag their exes more often.” True to form, she says this while wearing her ex’s Asking Alexandria T-shirt—which, she dishes, is the one sung about in their song “Casionova.” A mix of fun, ex-dragging and a lot of determination to learn and grow, Peach Dream are taking steps to not only drag more exes but also to put out more music and affect the scene around them. They’ve been working with Bone Shack Studio, specifically Cat Leavy, who recorded and mixed their self-titled EP, which resulted in a Pixies-like lo-fi sound that the Peaches loved. They’re also involved in the Provo Punk Collective, something they say has been rewarding for them and also for the male-dominated collective. Rose says, “I think it’s been helpful for both them and us that they’ve included us, because whenever they ask us to play a show, we ask them to try and find another band that’s not all guys. I think it’s helped them become more aware of how they organize shows and how they represent the punk scene.” Lynn shares a reason why this sort of awareness is important, saying, “I remember our first show at The Underground … it was just a lot of really loud guy bands, and I remember [thinking], ‘Where do we fit in the lineup?’” Bravo, too, says that too much masculine energy can be uncomfortable for a bunch of non-male musicians because there’s a sense of having to prove themselves. They also point out that Peach Dream have three PoC members, bringing positive representation to the diversity-lacking punk scene.

At their heart, Peach Dream are punk. They are so open to and insistent on challenging norms. They are open to learning new instruments, encouraging vulnerability and playing musical chairs with those instruments so that each member has a shot at doing their own thing. But they are also open to new territory, citing the band they recently toured with, Reno’s City Wolves, as inspiration to learn more about technical pedals and amps. DIY, but not glued to its fuzz, Peach Dream will undoubtedly continue to bring their ultra-catchy songwriting skills wherever the fuck they want to.