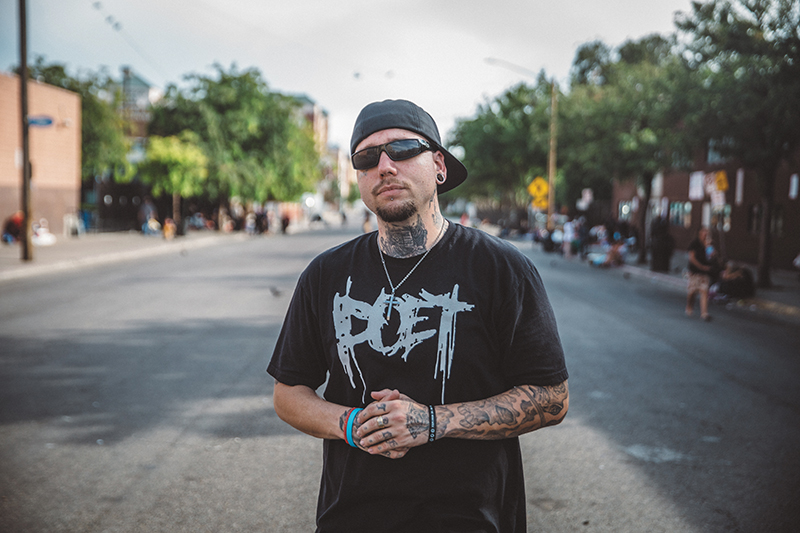 SLUG’s October Localized show will start snow season with three emcees known for songs laced with chilling content and lyrical skill. First up is the Battle Axe Warrior G-Life, followed by Kaotic the Verbal Assassin and then the Poet of the Proletariat. This series has been brought to you by our benevolent sponsors at Uinta Brewing, KRCL 90.9 FM, Spilt Ink SLC and High West Distillery. You don’t need to buy tickets—as always, Localized is a free show, open to patrons 21 years of age and older.

Poet, aka Ryan James Parker, has worked at The Road Home as a Client Advocate for two years, which is about how long he’s been recording music. When he’s not involved with politics and community action (and his children), he finds time to record songs about politics and community action. Poet is working on a seven-track LP titled Rio Grande that is scheduled for release by this winter. Don’t expect any songs glorifying drugs, material possessions and designer clothes. Expect to be challenged morally and mentally with an old-school flow and boom-bap beats that are reminiscent of hip-hop heads like Marley Marl and Easy Mo Bee. While his style may have been influenced by emcees like Biggie and Tupac, his content is mainly focused on Utah and the underrepresented citizens therein.

I met with Poet on “the block” on a blistering Thursday afternoon, during what seemed to be roll call. There were about 20 police officers on the median of 200 West, between 200 South and 400 South, looking militarized and ready to spring into action. It was a part of the city’s, county’s, state officials’ and business owners’ plan to clean up Downtown—specifically, the area between Pioneer Park, the Frontrunner station and The Gateway. “If you are experiencing homelessness [in Utah], this is your area,” says Poet, “and not just for the camping, but for the shelter, for health services, food, the Weigand [Homeless Resource] Center, transport … This has been the area.” Things are changing rapidly for the homeless in the area, and many question the intentions and effectiveness of the new plan to appease business owners and concerned citizens.

“Over the last two years, pleas were being ignored about needing more housing, Medicaid expansion and access to treatment,” says Poet. “What happened was the [homeless population] continued to grow as predicted, and then a lot more seedy things started to take place. You have people openly using drugs—20 guys shooting up intravenous drugs right there on the sidewalk. You would see open drug deals. You would see fights.” These situations are what Poet explores in his music, best reflected in “Rio Grande” featuring Ms. Shii, a song and video that represent the struggle of homelessness in Utah from the viewpoints of those affected by it as well as the people whose job it is to help them.

Even though things may look bleak, Poet remains levelheaded through the winds of change. Everything hasn’t changed for the worse. “There were people who may not have wanted to stay at the shelter [before] because they were trying to find recovery,” says Poet, “and it’s pretty hard to stay clean when five people are offering you dirt-cheap prices on drugs before you step in the door.”

According to Poet, the current state of affairs around the Rio Grande is a result of negligence, with the police “cherry-picking” whomever they wanted to arrest for years. “What we are seeing with Operation Rio Grande is Phase One: Bring in every single officer,” says Poet at the time of the interview. Reports state that you can be stopped and frisked if you are in the area—even if you’re an innocent bystander—and that you won’t be able to gain access to the Rio Grande area without a proper form of ID. “There are no civil rights,” says Poet. “An officer can ask me to surrender my ID at any time, and I have to do it. … Rio Grande’s debriefing stated that now, in this area, due to Operation Rio Grande, you are automatically the suspect of a crime.”

As Poet states in his song “Call to Armz” featuring Dusk Raps, action is needed. Poet urges listeners to “defy conformity” and think for themselves when attempting to enact societal change. Though the odds are stacked against us, eventually, history will show who was on the right side of the societal issues we’re dealing with.

Thankfully, expressing your thoughts about legislation through art hasn’t been outlawed yet. Localized concertgoers will notice that Poet’s sets are serious and thought-provoking. He uses the time in between sets to inform the listeners of things they can do in the community in a tone some may consider challenging. Poet represents the Salt Lake underground like few others. So while his set won’t feature the ratchet energy of a 2 Chainz show, you will become more aware of your surroundings while bobbing your head to the kicks and snares. Make sure to keep yourself abreast of what’s happening in the city as well as Poet’s career. The best way to do so is at Urban Lounge on Oct. 18 with yours truly and the rest of the SLUG staff, who will be tabling along with Utah Against Police Brutality and the Young Democrats of Utah.