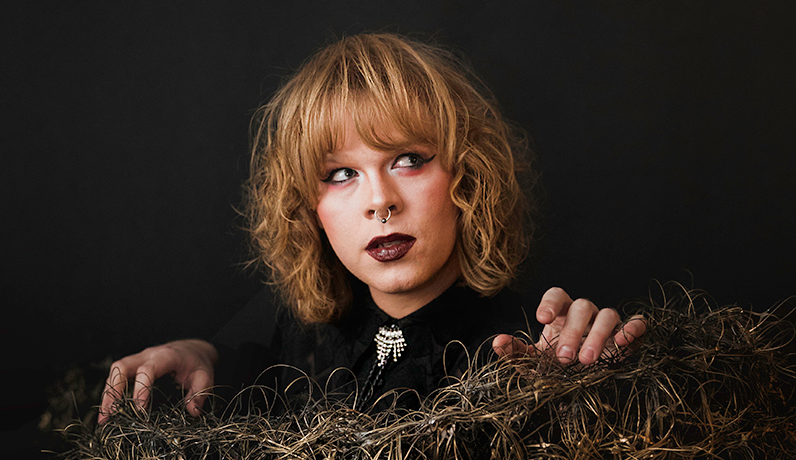 Spring is solidly in swing, and this month’s Localized brings a trio of singer-songwriters/pop poets in Sonnei, Stephanie Mabey and Julian Moon. This lineup is sure to soothe, smooth and groove the agitated, post-hibernation beasts within and thaw the residual freeze from one of our weirder winters. Join us at Urban Lounge on April 19—doors at 8 p.m., show at 9 p.m. SLUG Localized is always free, 21-plus and sponsored by Uinta Brewing, High West Distillery and KRCL 90.9FM.

Sonnei is an artist whose expression has shape-shifted sonically and aesthetically. From school programs in second grade to the typical national anthem stint to singing with local dynamos, their career has been one of transformation. “I had this fear somewhere deep inside me that performing wasn’t a practical dream,” they say. “I always looked at people like Prince—who was the first memory I have of seeing someone androgynous and being wowed by that.” Sonnei’s early adoration for well-produced pop and soulful vocalists like Amy Winehouse has driven their sonic identity. “I listen to a lot of oldies,” they say. “Simply Red was an artist my dad listened to … Fleetwood Mac is a huge influence. Stevie Nicks is a style icon for me, and a lot of her writing style.”

Sonnei is no newcomer to the local music scene. From the roots of tinkering in Garage Band with their childhood best friend, Sonnei and their collaborators started a stripped-down melodic cello, vocal and percussion trio under the moniker The Femme Medea. Shifting gears soon after, Sonnei joined local supergroup Elytra. “I felt like that band had a lot of momentum,” they say. “After six months, we played a Twilight Concert Series show. Stuff was moving so fast for us because everyone in the band was so good and had a reputation already! After the band broke up, people were mentioning to me, ‘You should really be a solo artist.’” After an introduction to local producer Taylor Hartley, Sonnei found new direction. “We use really cool sound bites like melodic breathing, stomping, etc.,” they say. “After meeting him and working on the first single on my EP, I knew I had to work with him for the whole thing.”

Good production is not a crutch for Sonnei, whose rich, bluesy yet genre-bending vocal talent is undeniable. Sonnei’s spirit of eclecticism with sensitivity and subversion comes forward in their sound, and their R&B-influenced vocals mix with electronic, pop and ambient influences. A boundless attitude is axiom in Sonnei’s artistic identity at all levels. As a queer performer, they’ve navigated the complexity of being “beyond the boxes.”

“Ultimately, people hear my voice, and sometimes the other elements aren’t as important, which I’m kind of grateful for,” they say. “Something about androgyny and my stage presence is alluring to people. I think, for some people, it can be really awakening. I accept and embrace all reactions. I think that’s why I’m so passionate about my writing being a reflection of our current world. With this EP, I put a lot of focus on ambiguity. I wanted the lyrics to be relatable. There’s a lot of moments where I could have used pronouns in describing a romantic situation. Instead I chose to leave that open so that whoever the listener is, they’ll hear the message and they can apply it to themselves. I like that element of mystery—that’s part of my brand at this point.”

Sonnei’s vision is glancing beyond the boundaries of the local scene, with a sharp eye trained toward an even grander ideal. “I thought to myself [when I turned 27], ‘I have to give this my everything,’” they say. “This is the only thing I really want. I wanted to apply all the feelings I had about all the pop stars I idolized to myself. I knew I had to do this the way I’ve always dreamed of doing it.” Sonnei’s newest EP has yet to be performed live, and this month’s Localized showcase will be its first reveal. “The Localized show is going to be really special for me,” they say. “It’s a kickoff point for this project. This will be the first moment people see my intention. This is the most vulnerable I’ve ever felt. The artists I’ve related to the most are the ones where you can see through the glamour.”

Sonnei’s year is coming together, and they’re keeping an open mind to what might emerge in the coming months. Writing more tracks, pursuing music video production and even stage presence and choreography are currently forming in Sonnei’s creative brain. “I’m trying to get the music in people’s hands and [familiarize them] with this side of me,” they say. “There might just be a point things start to tumble!”