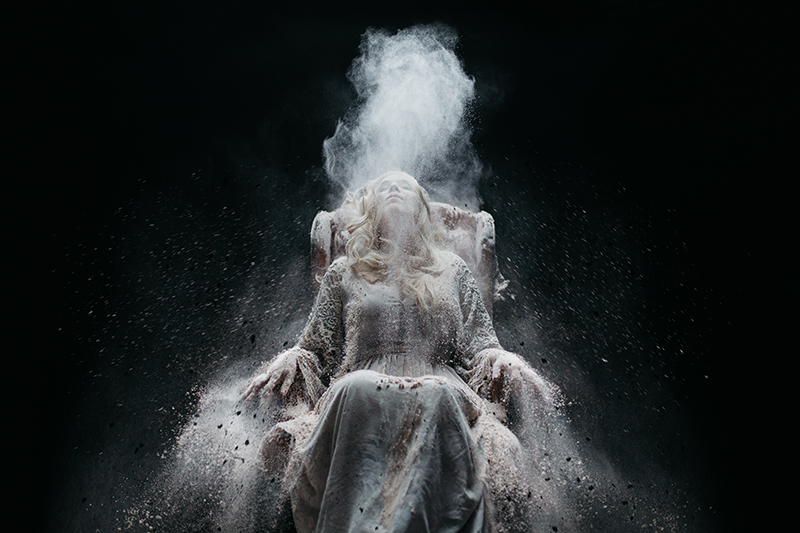 Stephanie Mabey is something of an enigma, with a musical career that sprouted from struggle, transition and unexpected grace. “About six years ago, I was going through a divorce and figuring out what I was going to do with my life,” she says. “The last year and a half to two years has been the first time its been quiet enough for me to focus!” The labors of Mabey’s personal experiences have served as a solid foundation for contemplation in her music career, which has transcended the noise.

Around 2009, Mabey released a sweetly flippant, omnichord-driven tune titled “The Zombie Song,” which, in 2011, was paired with a charming animated video. The comical, clever and edgy tune took on a life of its own years after its genesis. “Weirdly enough, there are all these kids that are just finding it now!” she says. The nonlinear nature of Mabey’s career thus far has been something of a strange blessing, making space for the end of a marriage, raising a child and a stepping back from prior cultural and religious upbringing—a process that comes forward in her songcraft. “I think in metaphor and imagery, so songwriting comes very naturally,” she says. “For the longest time, things were pretty invisible to me: I would feel things deeply and not necessarily know why I was there. I didn’t necessarily know how to sort it out or what it meant. Music has been this place where I can sit down and sort things out.” Having recently come to terms with an ADD diagnosis, Mabey has found an ever-growing capacity to cognitively channel herself into her writing process. “There’s usually a character I’ll use … to become objective,” she says. “When you’re down in it, it’s too messy and hard to see through your situation. It’s helped me really evolve as a person.” This evolution by fire is apparent in her recent sound, which is rich with empowering anthems that speak to overcoming ordeals and rising from the ashes.

Mabey’s most recent EP, I Still Taste Fire, released in September 2016, yet her older catalog is concurrently carving a path for her expanding potential. Having no management or outside art direction, Mabey is honing her sonic and aesthetic identity in a wholly organic process, from the roots up. Recent exposure via a cover by David Archuleta, television spots on HBO’s Leftovers and a soundtrack cameo on Overwatch have accelerated Mabey’s exposure, but still, her vision remains gradual and mindful. I Still Taste Fire has brought to her listener base a fresh level of maturity and imagination that Mabey feels proud of, and she remains pleasantly grounded in her process rather than the outcome, regarding what she sees ahead this year and beyond. Mabey is genuine, humble, refreshingly open and honest, an attitude that shines through in her EP.

Production support via Scott Wiley and local pop dynamo Taylor Hartley boosted Mabey’s recent work with a sonic complexity that supports her soft, smooth vocals and imparts a clean, smart-pop punch via programmed drums, click tracks, intelligent sampling and orchestration. Mabey serendipitously befriended Hartley some years ago while both worked in a foundry, and the ongoing collaboration has generated a complex yet wholly accessible musical identity for Mabey. “It’s all sort of an adjective to the emotion of the song,” she says. “I love things that feel a little bit more vintage, mixed with things that feel like the future. It’s a playful retro-future thing.” Title track “I Still Taste Fire” is a must-hear example of Mabey’s grand sound and engrossing lyrics, and the embodiment of solid songwriting and talented production.

As for her image and overarching brand, Mabey has recently refined it toward matching her techno-antique aspirations. “I’ve dug in this past year and tried to be more thoughtful about that side of things,” she says. Mabey’s recent visual offerings have been a shimmery, edgy yet feminine blend of ’60s-style influences, lit with soft neon light as though caught in a cosmic time warp of the future and the nearly forgotten. The effect is Bewitched meets Bladerunner, an inventively dissonant vibe that Mabey brilliantly embraces. Having taken the helm of her own art direction in the past year, her personal aesthetic is blending beautifully with her sound, which she cogently encompasses as “fresh without being challenging in a way that feels unpleasant!” Indeed, Mabey’s music mingles with a pseudo-experimental ethos while remaining accessible and poppy.

“It occurred to me in the last few months that I’m actually a very DIY artist, and I’ve never treated it that way,” she says. “I used to create things to get through a gatekeeper, as though the point was to pass through a door to the next thing. Now I’m focusing on getting my music as directly to people as possible and as authentically as possible.” Mabey has set out to reach her growing audience with regular YouTube videos, effectively inviting her listeners into her life and forging an attachment to her fans. “I really feel a responsibility to connect,” she says. “My whole circumstance has been really awesome, and I feel so lucky how things have progressed and that things in my personal life are really quiet and the people are still listening!” Mabey concludes that “creation without expectation” is the path forward for her, with an appropriately balanced air of confidence. For the moment, joining this month’s Localized bill is a brilliant step on that path.