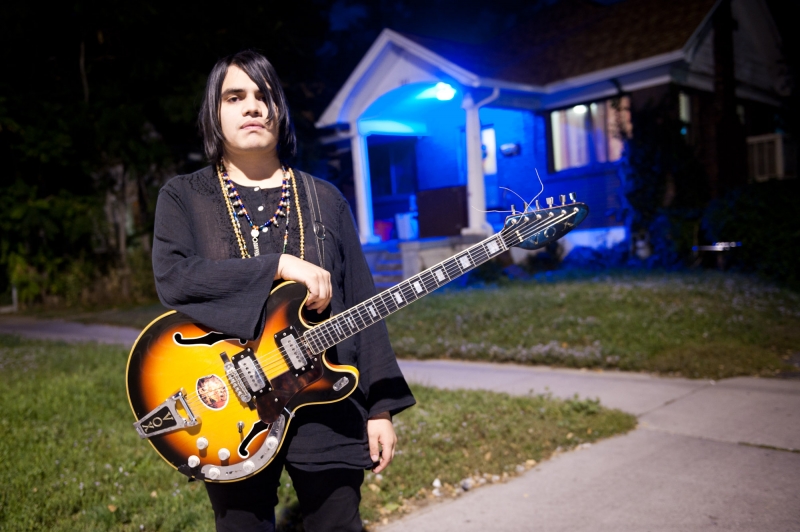 Super 78 have been around since sometime in 2009, when Cesar Reyes and Rocky Maldonado changed the name of their high school band, previously called The Whirlings. The music has kept the basic feel over the years since, which Reyes describes as wall-of-sound, Phil Spector–style psychedelia. “I love the sound of multiple guitars, in unison, playing the same chord,” says Reyes. “It’s very repetitive, so the music has that hypnotic thing.” After a show in Portland, Reyes says a newspaper there compared Super 78 to a meeting between Gang of Four and MGMT. After he read this, Reyes says, “I was like ‘What the fuck—that’s so weird.’” Reyes loves ’60s music and the whole ’60s era seems to influence the band heavily. They even play ’60s instruments. Holding up his Vox Ultrasonic, Reyes says, “This guitar is a big part of the band. Everyone has a Vox, played through Fender Reverbs. It’s the most essential part of the band.”

Reyes says the songwriting process for Super 78 can sometimes be collaborative, but, for the most part, he does it all. People have been coming in and out of the band since the beginning, but Reyes has been the only constant—“I write the songs and hash them out with the rest of the band,” Reyes says. Even though the membership has been unsteady over the years, Reyes says the lineup is solid right now. Reyes sings, plays guitar and writes the songs, Drew Workman plays keyboards, Sawyer Garner, Leon Ridd and Joshua Lopez play guitar, and the newest members, Kai Watson and Charlie Samuel, play bass and drums/percussion, respectively.

When asked what Super 78 has recorded, Reyes says, “Nothing. We just record ideas at the house.” Super 78 doesn’t even have a Bandcamp page, but older tracks can be found on their Soundcloud. “For the stuff I really care about, we make videos and put them on YouTube,” Reyes says. The videos consist of pieces of film from the ’60s or a still image—a guitar, for example. The videos are a way to hear the songs instead of something to watch. Super 78 can be found on YouTube under the username super78cult, or you can link from their Facebook page.

Super 78 haven’t started recording an album yet. Reyes says, “I’m not quite ready to release anything because I want to do it old-school style, where I make 50 songs and choose 12 to re-record.” When Reyes says old-school style, he’s not expressing an aversion to digital recording, although he would record to tape if somebody who knew how wanted to record them. To explain old-school style further he says, “Like when there was no Bandcamp and people worked really hard to release something physically.” Super 78 already have around 30 songs, and Reyes says a few are ready for the album. But he doesn’t want just good tracks on his album. He wants something that works as a complete piece. He says, “I want to make it flow as an album, start to finish.” Reyes likes albums that take you from point A to point B—he uses Primal Scream’s Screamadelica as an example. “It starts off with them having a party and ends with them coming down from whatever drugs they took,” he says. “That’s fucking awesome to me.” He’s not necessarily aiming to take the listener through a story, but likes when albums must be consumed as a whole.

According to Reyes, Super 78 play in California often, though not so much locally. They don’t have specific ties there (Reyes is from Mexico City), but have just connected with a scene and other bands from there. Reyes says, “The stuff we like to do, ’60s influenced wall-of-sound stuff, gets a better response in L.A.” They might have a stronger following in California, but Reyes thinks, if they do, it doesn’t mean much. Over the past few years, Super 78 have been to California about nine times and last visited the state for the Oakland Echo Festival (headlined by Lumerians, Dead Meadow and The Cosmonauts on three consecutive nights) at the end of October. Reyes says that when Super 78 head to California, they try to make a tour out of it, but only ever play a few shows. As far as touring, Super 78 have been to Portland, Denver and California.

The only plans Reyes has for the future of Super 78 is to record an album this winter. He’s down to play shows if good opportunities come up, but says, “My main goal after Oakland is just going to be to record.” So be sure to catch Super 78 at Localized. Unless you live in California, you might not get another chance anytime soon.