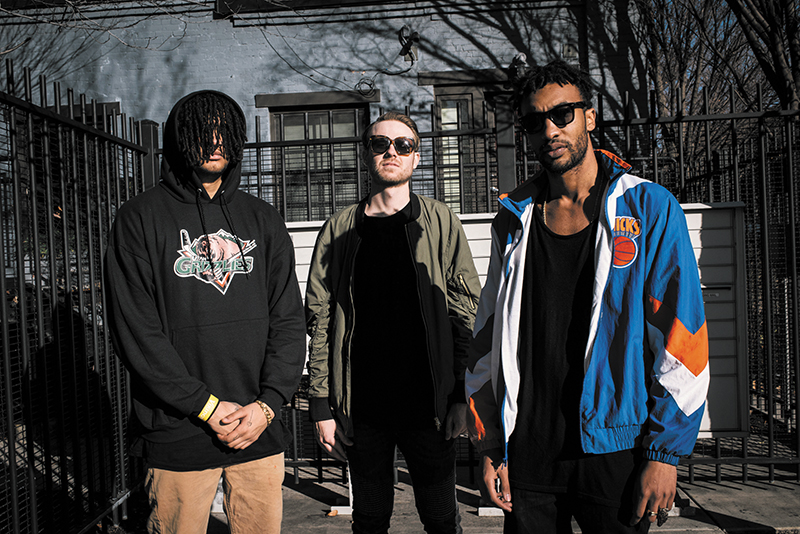 (L–R) Ethan the Barber, CASH and Younga$$ Nico of Swell Merchants bring a passion for performance and respect for the craft to their hip-hop stylings.
Photo: Russel Daniels

The SLUG Localized concert series is back in the hip-hop game with yet another joint at Urban Lounge, and it promises to be lit. The April 21 show will take place at 8 p.m., featuring headliners Swell Merchants and supported by VilleAge veteran Cig Burna and Poet. The show is free of charge, thanks to our sponsors at KRCL 90.9 FM, Split Ink SLC and the Uinta Brewing Company.

Emcees Younga$$ Nico, Ethan the Barber and producer CASH visited SLUG headquarters to discuss the upcoming show and their first official album, Happy Days, an 18-track effort that includes shoutouts to the enigmatic Dennis Rodman, Topanga from Boy Meets World and Basquiat. The trio’s sound is hard to explain—I can’t really put my finger on it. When I think the beats are synthetic, they throw in some strings and guitar riffs. When I think they are doing a lot of chanting and “trap style” cadences, they’ll deliver 16-bar verses that are similar in style to “classic” emcees. “It’s all about the background vocals—the little things that happen in the background are so important,” says Nico. If I had to put them into a box, it could be described as “punk trap music.” The common factor in most of the songs is the bass-heavy quality that they possess.

Musically and personally, Swell Merchants are still in the developing stages. They recorded Happy Days in a closet: CASH made the beats with the help of Ethan the Barber (who is an actual barber), and Nico added his energy and boisterous personality to the random conversations that bookend songs and make the album intimate and conversational. The content is sporadic, but mainly concentrates on partying, girls and dream fulfillment. While the beats may be dark, slow and brooding at times, a sense of optimism and energy emanates from the tracks, seeing as how the group hasn’t been burdened by the difficulties of the music business that have jaded some of their more seasoned contemporaries—yet.

The Happy Days album art is a photograph of a wall by CASH’s dwelling. Laden with dry, reddish leaves, the words “HAPPY DAYS” are scribbled on the off-white surface in what seems to be permanent marker. “This is the first real project that had a theme,” CASH says. “I took the picture by my house walking my dog, and he ran by this fence and I went back there, and that was on the wall. Some homeless guy had been sleeping there and must’ve been marking the [passing] days.” The album cover of Happy Days contrasts its title, like the contrast between the album’s brooding, dark sounds and the upbeat nature of the group’s performances. “It was supposed to be ironic—a slow, dark album with the name Happy Days,” says CASH. The group formed in the same organic way that produced the album cover—friends came together and bonded over their love for music and their mutual respect for each other.

The trio has been rising quickly in the past few months, dropping roughly 20 singles on SoundCloud and a demo project (aptly named Demo) before actually putting an official album into their discography. “Last year, we picked up the pace,” says Nico. “We did our first legit show—well, our first show was a BBQ party. Our first real chance was opening for Lil Debbie and Caskey at The Loading Dock. I was really stoked because it was the first time our name was on a poster. There were tickets with our name, and we were like, ‘Whoa, that’s weird.’”

Swell Merchants excel when they perform. They jump around like House of Pain do, covering every inch of the stage and connecting with the songs and their audiences. I doubt you’d ever catch them sitting down onstage like Big Pun or The Notorious BIG. Rather, they draw influences from big-name artists, from Kanye West to Future, Travis Scott to Young Thug and A$AP Mob.

When critiquing new groups, it’s hard not to use clichés and tired comparisons claiming that they’re “a breath of fresh air” or “the next hot commodity.” Many rookie rap groups fall victim to trends like wearing New Religion jeans, flashing guns at the camera in videos and using slang gratuitously in an attempt to gain fans and momentum, but that’s not a problem the Swell Merchants have. “You should be trying to make your own thoughts and form your own words and shit, but naturally, maybe [certain] cadences might come across [in your music],” Nico says. “Sometimes I wanna rap like Young Thug, but at the same time, I’m gonna be me and rap about the shit that I know and still actually use words, not weird sounds and yelps.”

Headlining a show is a big deal for a new group, a point that Swell Merchants are well aware of. “[Performing with] Cig is a big deal for us … Cig and Brisk are both the homies,” CASH says. “The [hip-hop] scene [in Utah] is getting nice, and we’re right where we want to be right now.” It’s hard to predict which newcomers will latch onto the public consciousness and create a movement. It’s even more difficult to keep a group of artists together long enough to make that dream possible. Swell Merchants are no different in that regard; however, with their passion for performance and creativity combined with their respect for their craft, whatever they do will be a pleasure for fans to digest.

Ride the Swell Merchants’ wave and listen to their new album at soundcloud.com/swell-merchants before you check them out on April 21 at the Urban Lounge, one day after they release their untitled new project on April 20.