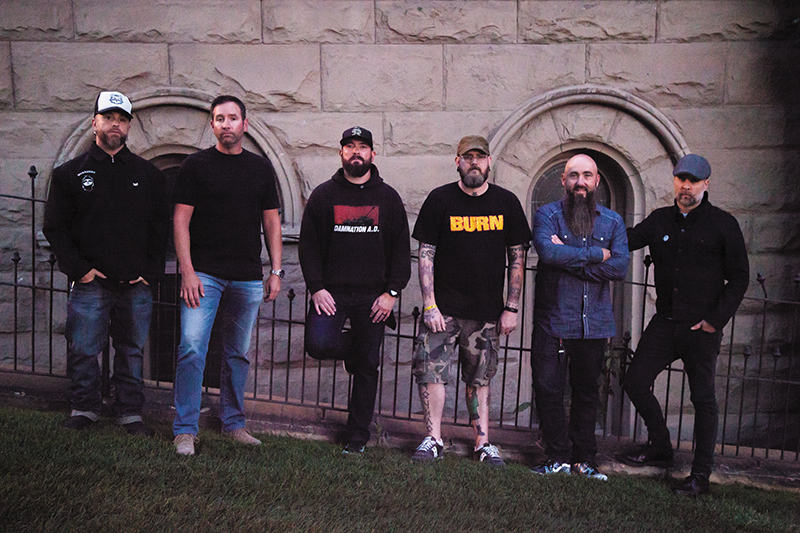 If you’re like me, you’re probably finding ways to celebrate Halloween as early as possible. If you don’t have enough money for decorations, or if you’re too old to go trick-or-treating, or if you’re bored with the selection of horror movies on Netflix, Urban Lounge invites you all (21-plus) to October’s SLUG Localized showcase on Oct. 26. This month features some of the best straightforward hardcore by way of Villain and the grimacing, blackened grinding of Burn Your World, with The Wake of an Arsonist opening. As always, SLUG Localized is free and will be sponsored by Uinta Brewing Co., High West Distillery, KRCL 90.9 FM and Spilt Ink SLC.

Villain came together through a group of SLC hardcore veterans (the polite way of calling them old, according to drummer Gavin Hoffman) about a year and a half ago. Each member has years of band experience under his belt: Hoffman played in various doom metal bands, guitarists Jay Wilkinson and Matty Jones had stints in March Hare and Prod Iron, and vocalist Trent Falcone, guitarist Justin Spencer and bassist Brad Butterfield all played in the hardcore powerhouses Suspension of Disbelief and Reality in the 1990s. It was and still is a bunch of friends just playing music together, which accounts for their decision to include Jones as a third guitarist. “I just wanted to be part of the band,” says Jones. “We’ve all been friends for a really long time, and while there was no vision for a third guitarist, the sonic possibilities are endless.”

This kinship among band members stems from seeing regular guys play in bands like Reality or Into Another—suddenly the idea of being in a band wasn’t that impractical at that time. It’s also been threaded into what’s known as the Villain Mob—a crew with an impermeable bond that keeps them linked in a famiglia-like fashion. “I’ve played in tons of bands, and I’ve had dear friends in them,” says Butterfield. “For the first time in my life, I’m playing with my family.” The Villain Mob includes the close friends and families of each band member, and with it comes the support that keeps the band going. “It’s nice because with everyone’s wives, we actually have a crowd,” says Jones with a laugh.

Villain permeate with an anti-bandwagon approach—Wilkinson went into how, in our youth, we gravitate toward genres that aren’t “cool,” which in turn makes them so. “I would play in bands because it was cool to listen to or because [it was] abstract or wasn’t really accessible,” says Wilkinson. “We don’t write stuff because it’s really hot right now or how unlistenable it is.” Hoffman brought up how not many hardcore bands are starting up, but grindcore and doom bands are sprouting everywhere. “There are a few bands in those genres that are really good, but they are a dime a dozen,” says Hoffman, “and hardcore music definitely is that way, too, [but] it’s just that this is the type of music we want to play. We’re not trying to ride someone’s coattails.” However, there is the pendulum effect possibility—that, due to hardcore being encrusted as a classic genre, it’s about due for a revival.

Villain put out their first single, “Throat,” on Halloween last year. This is a song with Falcone belting out his lyrics in a clear and intelligible delivery—a song that will have you banging your head until your neck is stiff. “Throat” became the fitting opening track for their four-song, self-titled EP—released later that year in December—laden with plenty of groove, metallic riffing, breakdowns and chant-heavy vocals. As the main lyricist, Falcone writes in the way that hardcore songwriters have done for years. “The lyrics follow the form of how we sound,” says Falcone. “It depends on what mood I’m in and how the music makes me feel, and it’s not necessarily happy music. I try to be a little more direct with my lyrics than I can be in real life.” Letting the lyrics flow has worked to Falcone’s advantage. Whether an entire song is written in one take or just two lines every two weeks, Falcone’s lyrics are anything but forced.

That same mindset continues to lead Villain into new material. With three guitarists, there is never a shortage of riffs, and humanity’s constant deprivation is always at Falcone’s disposal for lyrical enterprise. “As soon as you hear a new song at our show, we’ve got like four or five more coming at you,” says Jones. Despite their combined back catalog of recordings, Falcone and Hoffman claim that the aforementioned EP is their greatest creation. “For some reason or another, it’s all I listen to in my car,” says Hoffman. “I know it front to back, all of its intricacies, and I still don’t get sick of it.”

With all the new ideas getting hurtled back and forth, a full-length from Villain is definitely on the horizon, along with quite a few shows coming up. “The local scene has been really good to us with this band,” says Falcone. “Raunch, SLUG, The Heavy Metal Shop and KBER have all supported us; Jordan Clements books us shows a lot. Everyone has been very cool and welcoming.” Villain will stir up a ruckus at Urban Lounge on Oct. 26, so prepare yourself for a flurry of some of the most bomb-proof hardcore this side of the Rockies. Give their EP a listen at villainhardcore.bandcamp.com.