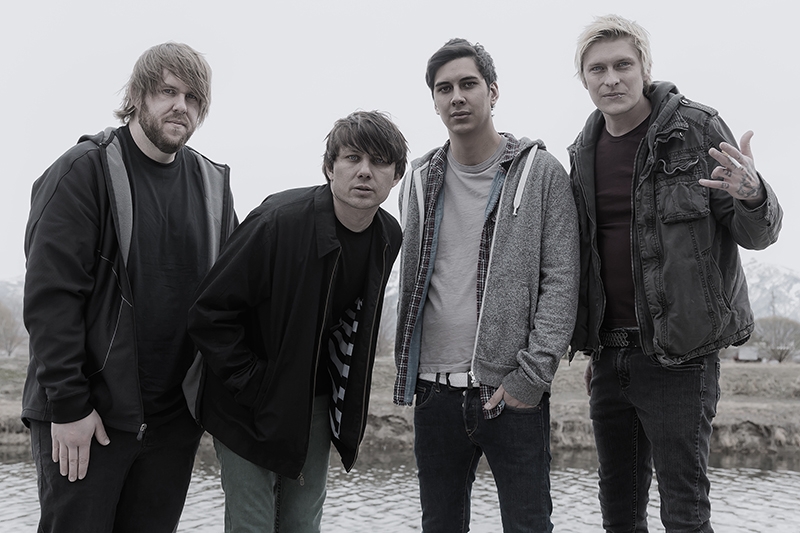 On July 11, emo noise-rockers Lydians will open a show at Urban Lounge featuring a few flavors of ‘90s alternative and punk. Rockers (and loafers) Chalk will be there, sharing some nod-worthy grooves before MoneyPenny (hopefully) gets naked and plays some punk songs. This show is 21+ and sponsored by the beer peddlers at New Belgium, the artists at Spilt Ink and the masters of radio at KRCL 90.9 FM.

MoneyPenny might be pop punk, but they’re still punk. In our chat, we discussed everything from trailer parks to hillbillies to elderly people shitting their pants. A few choice remarks were, “I’ve never gotten in trouble for pooping—anywhere” (Ryan “Pasty” Skipworth, bass), and “I just can’t wait to see a chick with three knockers” (Steve Holmes, guitar). That crude humor we remember from ’90s pop punk acts? It’s still intact with MoneyPenny, but that’s not to say that they don’t take their music seriously.

I met the band down a dark street, just before some train tracks, past some busted bottles. Through the dark, I found a bright light emanating from a small storage unit. Inside, I found a rag-tag group of miscreants, giggling and joking. The unit was clad in all the trappings of a DIY music space. Carpet lined the walls, handwritten set-lists were pasted to the door, various pieces of equipment and cigarette butts were strewn about—it was a place where punk lives. After the band introduced themselves, and after Pasty not-so-subtly tried to sell me tickets to their show the following night, I asked how they met.

“This [storage unit] is where it all happened,” says Isaac Ellsworth (guitar and lead vocals). He explains that, like many bands, they all just sort of found each other. Ellsworth mentions that he and Pasty, along with Holmes, Nic Battad (drums) and “all-around-dude” David Vegh (manager), are really just a pop punk confection. “We’ve gone through quite a bit of change-up—everybody’s been in different bands. It’s just mish-moshed together. We took some chocolate chips and flour and sugar and made a MoneyPenny cookie,” Ellsworth says. Though, as mentioned, like most punk bands, they aren’t just sweet—they’ve got some kick. “My part has Tabasco sauce,” Pasty says and laughs.

They’re individuals, but their passions are the same. The phrase “We are MoneyPenny” holds particular significance to the band—both in terms of their sound and their philosophy. “It’s different for all of us,” says Ellsworth. “Yeah, we’re a band, but if you look at a baseball team, you’ve got a catcher, a pitcher, a first-baseman, but it’s a team. We each have our own individual goals. Sometimes we hate each other and sometimes we love each other, but at the end of the day, we are MoneyPenny—that’s who we are.”

While you can hear a variety of pop punk influences in their sound, ranging from Blink-182 to Sum 41 or even New Found Glory, Pasty maintains that their sound is uniquely their own. “We naturally have a sound. We sound like another band or this [song] reminds you of something, but when it comes down to it, I think our album sounds like MoneyPenny. We did a lot of different things that we all love,” he says.

When it comes to the direction of their sound, they stick to their guns—they’re pop punk through and through. “We’ve played pop punk since we were little kids, and we’ve never stopped playing these fucking pop punk songs. We’d never change,” says Pasty. Holmes agrees, saying they aren’t in it to fit a mold. “We’re proud of the style of music we play—we’re not worried about trying to fit in,” he says.

In general, though, the sound is well-received, owing in no small part to the fact that pop punk is catchy, fun, and most importantly, relatable. Holmes explains it most eloquently, saying, “You can’t relate to digging up a dead body and having sex with it. [Our music] is relatable, not like some of this metal stuff.”

MoneyPenny have the key ingredients to something timeless—catchy hooks, good melodies, and universal lyrics, which draw fans from all walks of life. “If you come to our show,” says Ellsworth, “it doesn’t matter who you are. You’re not going to not fit in. Our demographic is so all over the place—it’s weird. There will be a gothic chick that comes up and scares the hell out of me, but then there will be an old 50-year-old lady, saying, ‘Oh I really love this! This is my granddaughter’s first concert. Will you sign this?’”

Not only does a MoneyPenny show bring a diverse group, but it’s also guaranteed to be entertaining. “If you come to a show, you’re not just going to hear music. You’re going to get a show,” says Ellsworth. And while the tough truth is that not every show is great, Pasty says they’re dedicated to making any show a good time: “Sometimes, if the crowd isn’t into it, we make them into it by taking our clothes off and making it fun. Steve goes and steals people’s beers. I bleed everywhere … It’s just energy—we each play our hearts out,” he says.

Although MoneyPenny have only been around for about a year, they’ve had a chance to tour a number of places (they told me some wild things about Texas), to record a bad-ass self-titled album with Joel Pack, and, most recently, have booked a sweet festival gig at the Seattle Hempfest this August. Pop punk might not be the most popular genre as of late, but as Battad puts it, “There’s a time and place for every type of music.” Right now is a great time for MoneyPenny.

MoneyPenny has merch, videos, music and more available on their site at wearemoneypenny.com.