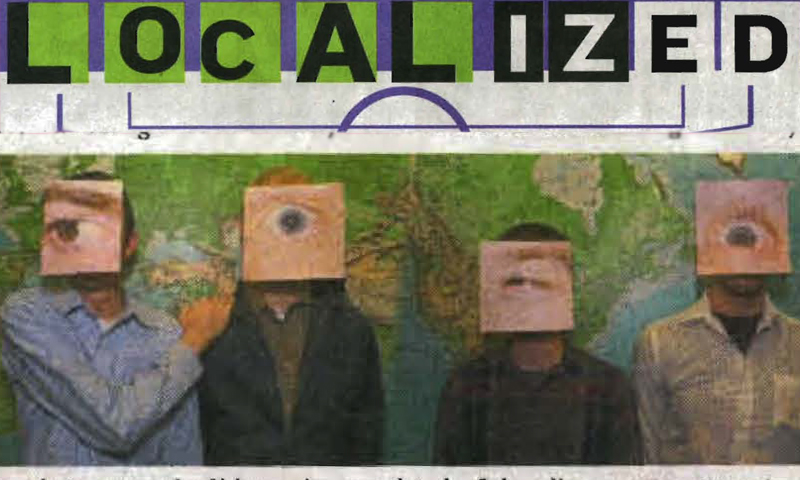 Localized is a monthly showcase of local bands. This 8th of October, we bring you (although you clearly don’t deserve it) On Vibrato and Victrola. This would be a good time to mope over your last ineffectual and failed relationship or to pensively sip a beer and consider the hypothetical events following. As always, the Urban Lounge is a private club for members only.

Russel and I rolled up to Salt Lake Coffee Roasters riding our respective bikes on a chilly Monday. Simultaneous to our arrival, a sparkling white Channel 2 News van parked outside the café. We met On Vibrato while waiting in line for a much needed hot cup of coffee. Our group labored up the stairs and chose a corner table as far away from the studious students as possible.

On Vibrato has been together for a year in July. They have a clean, well-mannered air about them and they all wore long-sleeved button-up shirts, making them appear as though they were just at a lecture or presentation. They’re the sort of boys you might recommend for a promotion; they did well in that entry-level position and you think that it would be wise of the company to take a risk on that young go-getter.

“’Post-rock’ would most comfortably describe our music,” Joshua tells us. They also describe it as “jazzy,” but that doesn’t fit so well, really. It’s far too structured to be jazzy.

“We just had our first studio experience. We’ve been playing together for awhile, but being able to actually listen to it afterwards changes the way we approach it so much. I’d say about a third of the album was written in studio after we realized things we hadn’t before because of the tape,” Jason explains. Behind them, the Channel 2 reporter interviews students. Her hair falls in a perfect blonde helmet and she looks out of place amongst the haggard students leaning over their textbooks. No one will talk to her.

The album they speak of is slow and restrained. When they play, they practice a measure of minimalism: only showing what they have to and not much more. The songs tend to be over 10 minutes and Jonathan tells me that they prefer to perform them so that they blend together and the set becomes a long stream of sound which they pull out of their instruments like glossy taffy.