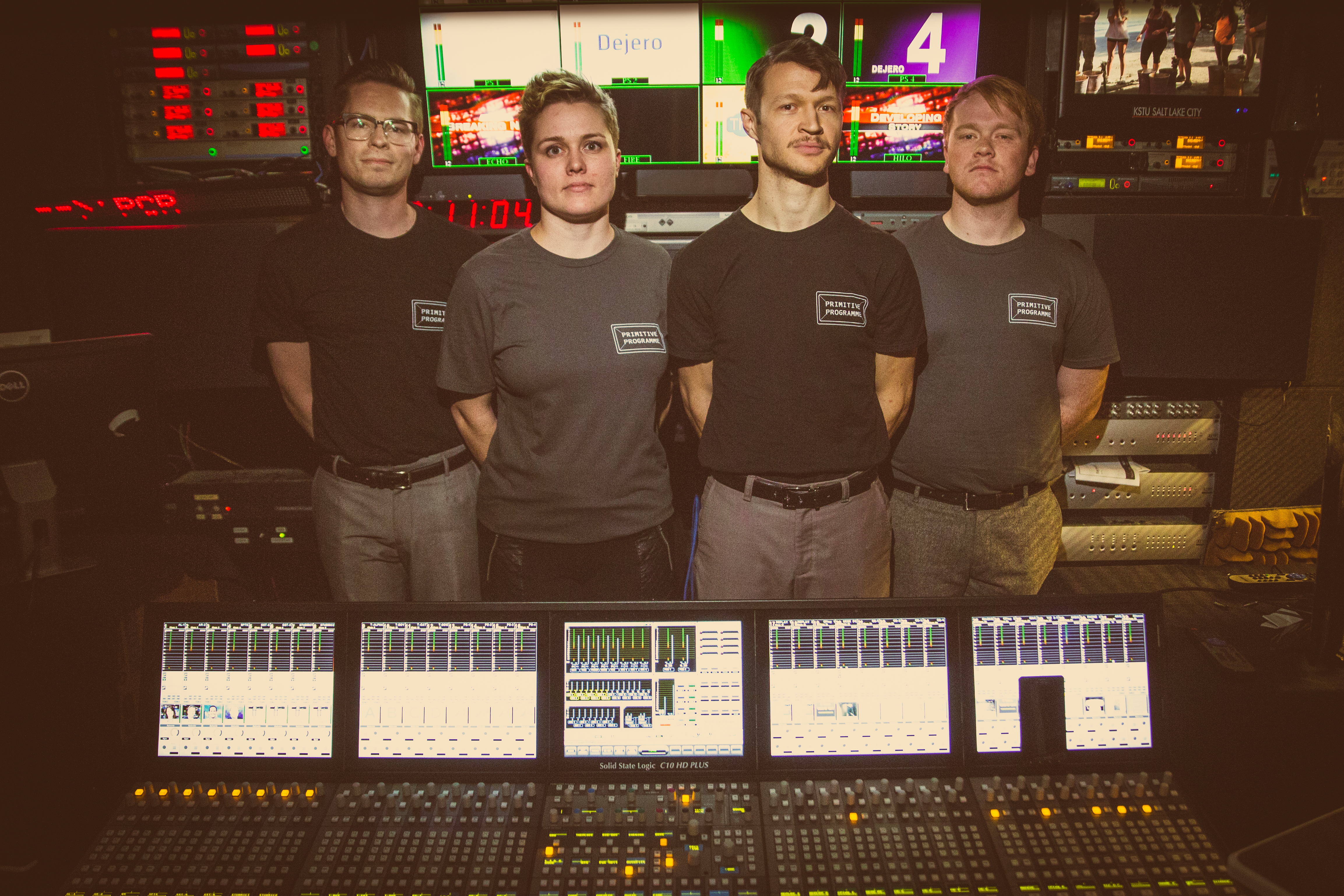 Rather than being pigeonholed into a specific category, PrimPro prefer to keep experimenting with styles while still keeping their punky energy.
Photo: johnnybetts.com

This month’s SLUG Localized brings you the glam-goth aesthetic and new wave sounds of Civil Lust; the futurist, minimum pop stylings of Primitive Programme; and an opening set by DJ Cesar Reyes. Prepare for waves of post-punk, new wave and electronic to hit the stage at Urban Lounge on June 29. Thank you to our sponsors at Uinta Brewing Co., High West Distillery, Spilt Ink SLC and KRCL 90.9FM. Localized is free and for folks 21 and older. Doors open at 8 p.m.

Primitive Programme take listeners back to late-’70s punk music while mixing in their own futurist, minimal-pop sounds. Influenced by bands such as Modern English, Talking Heads and Devo, you can expect to hear high-energy levels of post-punk and new wave on the band’s latest release, Modern World.

Primitive Programme, or affectionately shortened to PrimPro, are complete with seasoned musicians and performers who all play in one another’s bands. You can hear Josh Price (vocals, guitar), Ian Francis (drums) and Dennis Fuller (bass, vocals, synthesizer) in The Boys Ranch, and new addition Emily Strobell (synthesizer, keys) used to play with St. Bohème, of which Fuller is still a member. “We’re all just playing in each other’s bands,” says Fuller. “We get along really well because of it.” These four have fun onstage, whether it’s while diving into a new sound or experimenting with multiple genres. But let’s get one thing straight—although these cool cats are talented and care about their music, they don’t want to be taken too seriously. For them, it’s all about fun, laughter and good times.

PrimPro started off as the band Josh & Ian. “We used to sound more garage punk, but it transformed when Denney joined,” says Francis, “but our punk, high energy has stayed the same.” Fuller approached Price and Francis after a Josh & Ian show downtown, asking if he could play bass for Josh & Ian and if Francis would play drums for The Boys Ranch. “We ran into this issue where people were confused as to who was in whose band,” says Price. “People were coming to a show called Josh & Ian, but it had three band members. People used to think that Denney was Ian and Ian was just a fill-in drummer. So we knew we had to change our name, but the sound interestingly became different as well.”

Coming up with a name, however, was more of a challenge. “Choosing the name was a two-month text message with about 200 different names,” says Fuller. Their idea was to combine two words that had never been used before in a band. “One day, I was reading a book in the library about Dada and surrealist art, and they kept using the word ‘programme’ to describe the art shows,” says Price. “The word ‘primitive’ showed up a few times, too.” Price put the two words together and sent it off to the bandmates, who eagerly approved. “And they both have nine numbers in them!” says Fuller.

The group has been compared to many classic punk bands, but their favorite comparison so far has been a “surfy Joy Division.” When compared to the new wave genre, Price says, “I have always thought of new wave as punk for David Bowie fans.” For Francis, PrimPro’s sound is closer to its influences. “It’s more like we’re exposing music that we feel deserves more attention,” he says. Rather than being pigeonholed into a specific category, PrimPro prefer to keep experimenting with styles while still keeping their punky energy.

Another unique aspect to Primitive Programme is their quirky stage presence. High-energy levels are expected—but even more fun than that are the matching T-shirts that you can buy at their shows. “We also sell Primitive Programme pencils,” says Fuller. Francis adds, “Eventually we might get calculators.” Other fun ideas include putting download stickers onto the backs of their albums to add to the “programmer” concept.

Strobell’s addition to the band has been recent, as she hasn’t started recording with them yet, but her talents on keys and synth are bringing a whole new level to the group’s dynamic. “My primary instruments are keys because I started learning piano when I was four,” she says. “Bass, too.” Her debut with PrimPro was scheduled for the cancelled Modern English show, but that didn’t stop her or her bandmates from moving forward. “It was just amazing to be invited to play with a band we were inspired by,” says Price. “And right now, we’re starting to think of ways to include more keys in our newer songs.” Even with the recent release of Modern World and the music video for “Triangulate,” PrimPro are hard at work creating new music with upbeat sounds. “We could play songs that aren’t from Modern World and have a full set,” says Fuller. The group is also already making plans for future tours around the Pacific Northwest.

You won’t want to miss this band at SLUG Localized on June 29 at Urban Lounge. While you’re there, check out their awesome and clever merch. You can find Modern World at primitiveprogramme.bandcamp.com and see them play at The Utah Arts Festival on June 22. And, as Fuller says, once you hear them, it’ll be impossible for you to not “become a programmer now!”