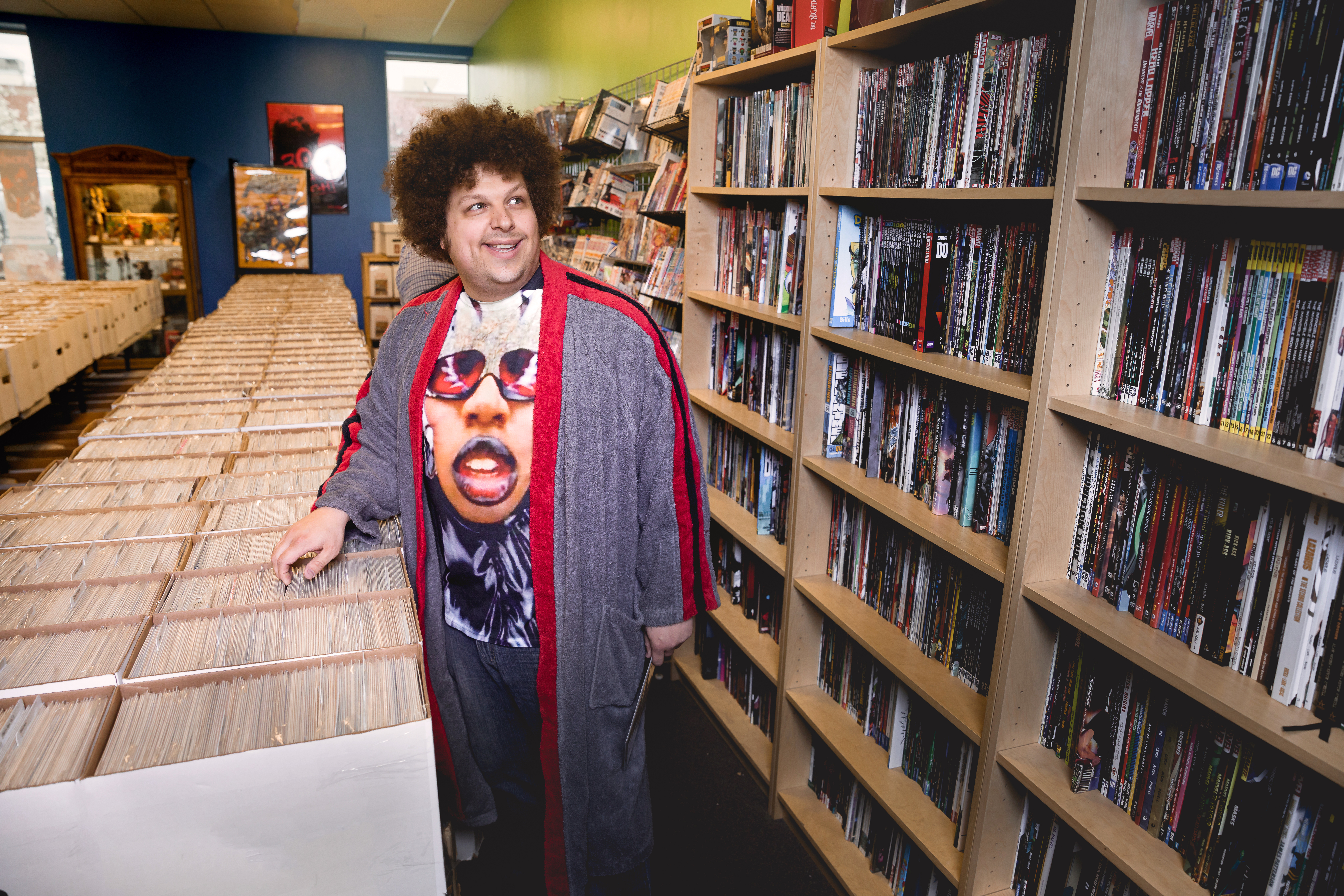 SLUG’s Localized concert series remains a platform for Utah’s top artists with a free show on May 17 at Urban Lounge. This time around, we mash up ska and hip-hop with Rhyme Time, Show Me Island and DJ Skratchmo. Localized is brought to you by our generous sponsors at KRCL 90.9FM, High West Distillery, Uinta Brewing and Spilt Ink SLC, and is only open to patrons 21 years of age and older, so leave the kids at home.

If a picture of our nation’s 44th president wasn’t sitting high above the kitchen cabinets, you’d think it was the set of That 70’s Show. The scent of barbecue chicken seeped out of a silver crock pot and filled the air as shades of brown and tan, argyle patterns and wood trim filled the rapper’s family’s Rose Park residence. Most people know him as Rhyme Time, formerly known as Atheist, or the guy with the ’fro from House of Lewis, but he mostly goes by Scott—Scott Knopf, the creative director for a printing company in Murray, Utah.

Casual rap fans tend to think about violence, expensive jewelry, exotic cars and designer clothes when they think of rappers, but that’s exactly the opposite of what you get with Knopf. His style stems from nostalgia, which results in conceptual songs about (and references to) wrestling, cartoons and pop culture. His flow is reminiscent of ’80s and ’90s lyricism, similar to Ludacris, because his enunciation is easy to understand no matter the listener’s birthplace. Rhyme Time manages to inhabit an area of rap that is unique, like Lil Dicky or Missy Elliott—being “cool” for being unapologetically nerdy (read: passionate) and different from his contemporaries.

Rhyme Time has been active since 2012, gaining a reputation for himself through freestyle battles on U92 after moving to Utah from San Francisco. He credits Bay Area acts like Zion I, Hieroglyphics and Crown City Rockers as his chief influences. “[Crown City Rockers are] my favorite group of all time,” he says. “I shout them out every interview. If it wasn’t for them, I probably wouldn’t rap.”

Knopf’s first album, Thanks for the Burgers, was succeeded by The Roger EP, Topanga and then Gnarly, which is set to be re-released sometime this year. Promoting his latest solo album took a backseat to group success. Rhyme Time and House of Lewis groupmates DJ Skratchmo, Donnie Bonelli, Apt and Chance Lewis were selected by City Weekly as the best rap group of 2015 and, as a result, were afforded the opportunity to open for Run the Jewels and Flying Lotus at the Twilight Concert Series.

Then the phone started ringing. House of Lewis had been selected to represent Utah on Season 11 of America’s Got Talent in Los Angeles.

“First I thought it was fake,” Knopf says, but after a few phone calls and several months of auditions, preparations and taping, House of Lewis made it to the top 80 of 50,000 contestants.

“Because we [are] white rappers from Utah … and [shows such as AGT] have a history of making fun of [certain acts], we were almost positive we were going to be the joke,” Knopf says. “It was really stressful.”

Although the studio audience seemed to like their first performance, “SHAKEFACE,” the program proved to be less than organic due to editing, and the performance that aired was a song that was a little less popular with the crowd and judges, a tune called “We’re All Gonna Die.”

Even though he has tasted a modicum of success on a national level, Rhyme Time still has his attention focused on the valley we call home. According to Knopf, connecting artists and fans across genres is the surest way to strengthen the Utah rap scene. Rap and ska might be an odd couple to some concertgoers, but for Knopf, pairing with a band appeals to logic because incorporating new sounds, new styles and new friends is conducive to higher energy and overall participation.

“At a rap show, everyone there is trying their hardest to seem cool,” says Knopf, “whether you’re onstage or offstage. Everybody’s really reserved, and you really have to bring something special to get the crowd to move with you. [At] a ska show … the kids come to dance. There’s no real separation between the band and the crowd … a lot of time for rap shows, you have to damn near kill yourself to get people to stand up and move towards the stage.”

While Knopf seems pleased with the scene and the direction of his rap career so far—“Having a Localized feature was on my bucket list,” he says—he still has some things he wants to see improve for himself and his peers.

“I hate how compartmentalized things are here in Salt Lake,” Knopf says. “Branch out … if you’re a Utah rapper, go see a folk artist at Kilby Court, go to Velour and see some rock bands—because they’re never gonna come check you out without you checking them out. Just be a part of [the Utah music community].”

If you are a hip-hop fan who grew up listening to Bone Thugs but don’t have a thug bone in your body (and don’t mind admitting it), then Rhyme Time is right up your alley. This show promises to be one of our liveliest to date. Join us at Urban Lounge after you listen to Gnarly at rhymetimerapper.bandcamp.com.