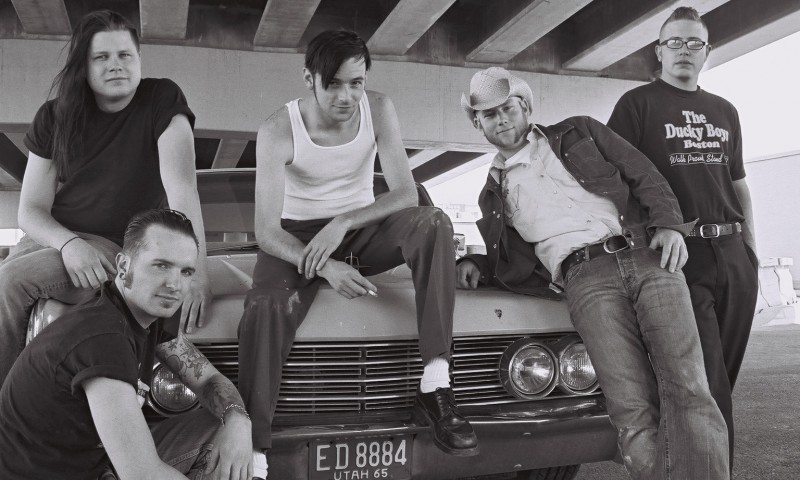 January brings to Salt Lake City slush and salt on the roads, so come over to the Urban Lounge to see some equally slushy and salty bands. The Salt City Bandits will be playing with the Salty Frogs and the Utah County Swillers. Lolalized will be January 14, 2005 at the Urban Lounge, a private club for members.

I made plans to meet with the Salt City Bandits at a particular coffee shop and I went to what I understood was the correct coffee shop and waited. On the other side of town, five young men idly sipped their respective beverages and waited for the errant journalist who never showed. An angry phone call later we realized the mistake so we made plans to meet the following evening. I waited where I thought we were going to meet for the second time, and they did the same. Sadly, these two places were yet again not the same two places. The Bandits were mad and so was I. Why were they doing this to me? Was it some sort of cruel joke? Across town, they were probably thinking similar thoughts. With the sad realization that we were not intended to meet in person, we conducted the interview over the phone.

“How long have the Salt City Bandits been together?”

“What’s the date today?” The day in question was December 28.

“It’s been three years exactly to the day.”

“What makes that particular day so auspicious?” I wondered. Was the end of the world nigh and they had to form a band to battle the forces of darkness?

“It was more like we finally found a singer so we started writing music. We had been fooling around and no one really played any instruments except for me. I was the only one with any experience and the other guys just sort of picked instruments and went with it.” Steve tells me.

Steve is the lead singer for another local band, Laser Gold, and it seemed odd that given his proven ability to hold a microphone that he wasn’t the front man.

“I do back-ups, but we wanted a front man. I was going to be the lead singer, but it just didn’t work out and then Lonnie tried out and instantly we knew.”

A day later, Lonnie emailed me with some responses of his own. “We all take lessons now. Steve, the Hesh, and Justin go every week. Tony and I go as we progress. I just wanted to learn how to keep my throat from bleeding. Singing is so much easier when someone tells you what you’ve been doing wrong, and hands you a glass of water instead of a glass of whiskey when your throat hurts. I usually drink both. I’m proud of all the guys. They have all come along way since we first met. I don’t think anyone except Steve knew what the fuck they were doing when we started.”