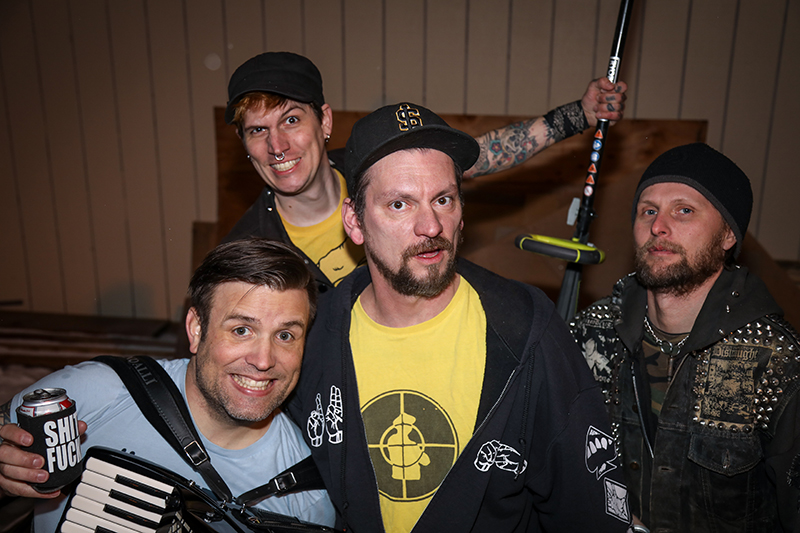 After coming off of a harsh and bleak winter season with downpours of thick snow, the worst inversion in recent memory and the ever-daunting national tension that came with this previous election, it’s nice to know that events like SLUG Localized are still around. March’s Localized showcase consists of wildly abrasive, folk-infused punk rock from Scary Uncle Steve and the calming, melodious, pop punk sounds of Wicked Bears, with old-school punk/ska powerhouse The Avenues supporting. As usual, SLUG Localized will be held for free at Urban Lounge on Mar. 16, and is sponsored by Uinta Brewing Co., High West Distillery, KRCL 90.9FM and Spilt Ink SLC.

“Our old band was doing a SLUG Localized interview, and our bass player Mike TheBass made a joke that started as follows: ‘Skunk’s next band, Scary Uncle,’ and that’s what he dubbed it,” says guitarist/vocalist Skunk after I asked him about the origins of Scary Uncle Steve’s namesake. “Then, Nate [Wilson (accordion/vocals)] and I started a new band, and I’m thinking we should call it Scary Uncle Steve because everyone has an Uncle Steve.”

Scary Uncle Steve are a band that exists on its own plane, not just in sound, but in personality. What they’ve created is straightforward punk rock—with an accordion wound up in the mix. “We never tried to write folk songs,” says Wilson. “We just wrote punk songs that happened to have an accordion. Because of that, they just happen to come out folky, and that’s what people regard it as.”

Coming off the heels of hardcore punk outfits Desolate, Endless Struggle, Negative Charge and Goatsifter, the members of Scary Uncle Steve came together through a shared desire to change the pace from hard and fast to slower and lighthearted. “This all came about because we were playing loud, fast music,” says Wilson, “and we wanted to be in a band that could play in any room where half the people wouldn’t leave—like we could play fun music you could sing to.” After constant coaxing from Wilson, Skunk agreed to let Wilson play in the band with his accordion. They incorporated drummer David Motiee and, after numerous invitations, Jesse Struggle on bass. “I kept asking him if he wanted to join this punk band that was gonna be with accordion, and he just kept saying, ‘No,’” says Skunk. However, one whiskey-drenched night with Mischief Brew on the turntable changed the tide. “We’re drinking whiskey and Mischief Brew is playing in the background, and Skunk is like, ‘Don’t you think this is a cool band?’ And I say, ‘Yes,’” says Struggle, “so he goes on about how his new band that still needs a bassist is going to sound similar to them, and they eventually talked me into it.”

Scary Uncle Steve’s sound is rooted in the idea of being able to play music live without having to plug in or use microphones. “I bought a little, battery-powered amp [and] wired a car battery to a bass amp, and Dave built his own drum set,” says Skunk. “The idea was we could play at a street corner and still play with our amps.”  Their DIY setup worked well, as they shuffled through living rooms and basements of friends’ homes, including the Boing! House. They made the switch to regular electric amplifiers after getting offered shows in bigger venues and because recording on the DIY setup was a fucking nightmare.

The group’s four-song EP, Stuffed in a Crawlspace, was recorded in one go by Andy Patterson, who still hasn’t forgiven them for having to record Motiee’s “Frankenstein drum kit”—a makeshift cocktail kit that was basically two floor toms stapled together. “I’ve kept in touch with Andy because we almost have enough material for a full-length, and I want to record it the same way we did our EP, which was do the music live and record vocals over it,” says Skunk. “And Andy goes, ‘We can do it however you want. Just don’t bring that fucking drum set down here again.’” They released Stuffed in a Crawlspace in 2015 on 300 7“ records. “We wanted to release our EP on vinyl because no one buys CDs anymore,” says Skunk. “We got the records from one company, pressed the sleeves through another, printed our own inserts, then went to my house and drank beers and hand-stuffed them individually.”

The effort that Scary Uncle Steve have put into writing and releasing their music translates to their performances, though they purposefully don’t play a lot of shows. Also, their experience in Punk Rock Karaoke enabled their ability to play anything from Slayer to Joe Hill. They played a Halloween cover set of The Cars the same day Struggle was released from the University of Utah Burn Center after being treated for his injuries sustained from a motorcycle crash. They are also planning on randomly playing one of their favorite albums live, front to back. “We all bust our ass and work,” says Motiee, “but this is what we want to do. This is what makes us happy.”

I merely scratched the surface of all the stories these guys have to offer in this little write-up. If you really want to get to know them, come have a few beers with them on March 16 at SLUG Localized and keep up to date with them via facebook.com/scaryunclesteve.