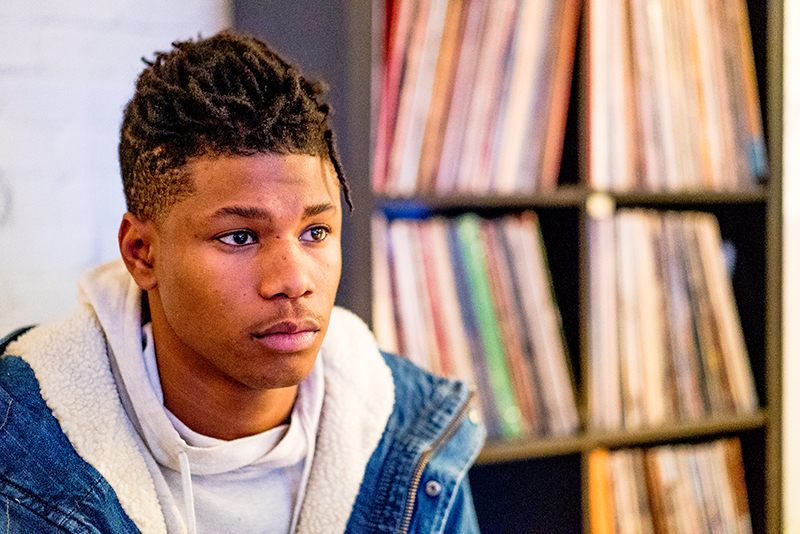 Pull up to the Urban Lounge on Feb. 15 at 8 p.m. for a Localized hip-hop showcase! This month’s show features Zigga and Shanghaii with opener V.O. Sensei. Thanks to our benevolent sponsors at Uinta Brewing Co., High West Distillery, Spilt Ink SLC and KRCL 90.9FM. As always, SLUG Localized is free of charge and only open to patrons 21 years of age and older.

The Beehive State’s newest buzzworthy rap artist, Alexander Bell Crocker, aka Shanghaii, is still in the early stages of his career—and his life. You can tell how new he is to the scene when you watch him pose for SLUG photographer Jo Savage’s photoshoot. Doing press and having fans is still a novel concept to him, yet he handles them with the humility of someone well beyond his years. “I didn’t expect so many people to actually show love,” he says.

In a rush to create a stage name, the Indiana-born, Salt Lake–raised artist found inspiration in “A Milli” producer Bangladesh, chose a region to represent himself and, just like that, the most populous city in the world became the mark of Utah’s hottest new act. “One thing that really bothers me is waiting so long to do it,” says Shanghaii. “I understand [that] I don’t necessarily have too much time to be doing shit.”

Despite low motivation and self-doubt in his teen years, Shanghaii has pushed past his mental barriers, and the city of Salt Lake appears to be behind the 24-year-old emcee (like very few rap artists before him). He’s got instrumentals from experienced Utah beatmakers like Illanes and Chance Lewis.  He’s released nine videos in less than six months, adding a Lemonade-type flavor to his first EP. He’s performed 11 times total, and in the very near future, he’ll be using his melodic voice and boundless energy to perform songs like “All for a Dream,” “Gas & Juice” and “Fuego” (Fuego!) on the Localized stage—songs reminiscent of a less militant 2Pac (vocally) with content similar to Chance the Rapper or “the old” Kanye.

“People don’t even know this about me, but I was actually releasing music last year,” says Shanghaii. “It’s just all the music I was putting out was terrible … and it took me [leaving] the studio I was at to completely forget about what I was trying to go for at that time and start going towards something else, and I think that’s what made me pop a little bit more in Utah this year opposed to last year.”

You have to credit Tobi Ali, a producer from Freeport, Texas (and welder by trade) currently residing in West Valley, for some of the steam behind Shanghaii’s breakout project, Shanghaii vs.

Tobi Ali. “It’s the sauce … even though it is Southern-based, it has something anyone can work around, obviously, if you can catch the flow,” Ali says.  If you ask him, the best way to describe his beats is “soul trap”: a blend of drill music and soul and funk, kind of like Young Chop meets DJ Screw and Organized Noize. “Shanghaii has a certain standard,” says Ali, “and we both meet that standard together as a team.”

Many contemporary rap artists resort to copycat tactics to get noticed, like using catchy chants, stylish images and beats that mirror Mike WiLL Made-It or London On Da Track to attract fans. Whatever the formula, Shanghaii has “it”: a medley of personal lyrics, soulful choruses and a passion for expression that transcends ageism and style barriers. “1992 & Forever (RUN),” shot by Eudo Quiroz and produced by NorbZz at the Key studio, was a turning point for the young artist. It’s a celebration of youth, friendship and partying that shows that the young bull might be ready for a bigger arena.

Shanghaii and NorbZz are working on the next project, which hasn’t been named yet. “We’re really trying to think about what everybody likes listening to,” says Shanghaii. “I wanna put a good blend of what my perspective is on good lyricism but also make those types of songs [that] people from this new generation can also find appealing.”

With his newfound spotlight, Shanghaii has encountered more than his fair share of potential collaborators and bandmates from around the valley—as well as detractors. In this year alone, his social life has gone from solitary to somewhat drama-filled. He is more of a recluse than a socialite, preferring to keep to himself when he isn’t performing, but as many rappers before him have found out, even a modicum of success brings hatred. “The best thing you could possibly do is just block people out of your life,” he says. “Take that negativity—push it out the door. Lock the door, and hopefully, it doesn’t come back in.”

Becoming a professional and separating yourself from your peers in a viciously competitive endeavor requires more than raw talent and years refining your craft. You must have clothes, stickers, business cards, an online presence and the ability to perform and present your best self when the situation calls for it. According to Shanghaii, these developments and more are on the way in 2017. Follow along with Shanghaii on SoundCloud and Shanghaii 801 on Youtube. With help from the scene here in Utah as well a few good breaks elsewhere, we could even see him on a national stage soon. Let’s hope that he stays true to his kind nature and easygoing ways—and that he always keeps Salt Lake City in his heart.

All for a dream.