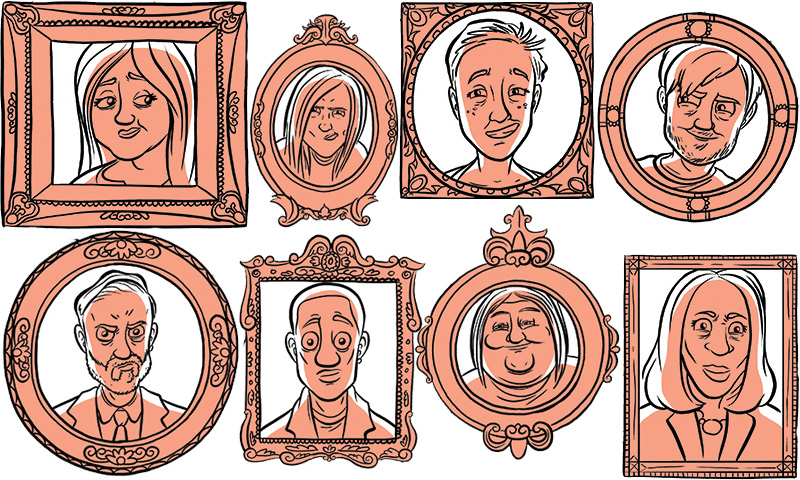 December brings together eight of Utah’s funniest comedians for the first stand-up comedy Localized showcase. The absolutely FREE show is one night only at Urban Lounge on Dec. 17, brought to you by Spilt Ink, High West Distillery, Uinta Brewing and KRCL 90.9 FM.

It’s a shame to find out that some people don’t know that Northern Utah has had a consistently thriving stand-up comedy scene for well over a decade. Our great little state has churned out some amazing comics over the years. Eight of the funniest Utah comedians will share the stage to not only entertain but also enlighten the masses on subjects ranging from awkward dating to hilariously bad depression—and all topics in between. Nothing is off limits with these comics—not even an “orphan funeral”—and that’s admittedly how the best comedy is done. Tapping the best of the best, these eight comedians are as unique as the material they bring to the stage.

If you have never been to a live comedy show, you have never had the full experience of the art form. Just like a live rock show, there is a connection between the comedian and the audience—a bond that forms through laughter. “If you go with other people, there’s a sort of connection you can make that you can’t with other things,” says Natashia Mower, the petite force of laughter who recently won a City Weekly Arty award for “Best Stand-up Comedian” and has helped launch new comedy shows in the state, including the weekly Funny Fridays at Sandy Station. She believes that sharing laughter and creating new experiences brings people to comedy shows. “You’re enjoying something in the moment, together,” she says. Jason Harvey, who’s been bringing his brand of funny to Utah audiences for six years, digs a little deeper into this idea of that connection. He says, “[It’s about] being able to connect through laughter and being able to laugh with your friends, just like you were able to do when you were growing up—but you’re an adult and you still get to do it.”

Anything can happen at a live show, and no two will ever be the same. No matter how polished the jokes are, the audience plays a huge part in the experience. Eileen Dobbins, who runs You’ve Gotta be Kidding Me—a panel show that pits comedians and other entertainers against each other in a battle of who can lie better with a straight face—says that “no two performances are exactly alike.” She points out live comedy’s role in helping to not only bring people together but also to cement culture. “When you see a comedy show, you’re fostering something creative and awesome in your community,” she says.

Even those who are regular performers can frequently be seen on the other side in the audience. Nicholas Smith, who started out as a heavy metal musician, got into the stand-up game about three and a half years ago when he needed a new outlet. Since that time, he has been a larger-than-life force on stages all over Utah, including Dungeons and Comedy, which brings together comedians who roll the 20-sided die in a side-splitting version of D&D. “I go to comedy shows because I genuinely love the art form,” he says. “A live experience is very different from watching a performance on a screen. It’s much more visceral and exciting—anything could happen.

Local comedy shows may not draw in arenas full of fans—yet—but the observations and humor of Utah’s comics are just as polished and funny as the power players. “There’s going to be something for everybody,” says Jay Whittaker, a member of the Geek Show Podcast and a favorite on panels at Salt Lake Comic Con. “I guarantee you’ll like all of us,” he says, mostly serious, while laughing. These jokers are skilled entertainers, still hitting the beaten path of numerous comedy superstars before them, week in and week out. There is something even more authentic when the comedy is grown out of our own backyard and our communal experiences. Mo’s Diner open-mic organizer and Comedy Carnivale founder Christopher Stephenson has been making people laugh for 13 years since he was a fresh-faced 18-year-old who did his first show on a dare. He talks about being a huge Michael Jackson fan as a kid. “He’d always talk about escapism,” he says. “Comedy, especially, is very relatable. I want to do that for people.”

With the availability to stream a comedy show at the click of a mouse, comedy as a genre is picking up steam at a level that hasn’t been seen in years. Many of the comedians working stages now had to uncover comedy in their own ways, as the accessibility just wasn’t there for a long time. Melissa Merlot, a favorite on the Utah comedy circuit for over 10 years, drew her inspiration from some of the greats, like Tracy Ullman. She remembers being younger and in awe of how easy some comedians made their performances look. “I remember seeing Gary Shandling hosting the Aspen Comedy Festival.” As she recounts, the audience was just horrible—a comedian’s worst nightmare. “He was so obviously ticked off, but he just turned everything into a joke and made everybody laugh, and I thought that was so impressive.”

Utah transplant Joy Lane also recounts how her passion for comedy began. “My first crush was Johnny Carson,” she says. She would smuggle a little black-and-white TV into her room to watch him at night. Growing up on the East Coast and visiting New York, a 12-year-old Lane ran up to Carson and told him that she loved him. “My mother rushed me away and said, ‘How do you know that man?’ and I said, ‘That’s the man on TV every night,’ and she’s like, ‘Well, how do you watch him every night?’” She was busted, but obviously lived to tell the tale. Similarly, Dobbins happened to be a Mormon home-schooled in Montana. “I didn’t even hear stand-up until I was in my senior year in high school, and it was Brian Regan,” she says. Dobbins is pretty sure that comedy didn’t even exist in Montana until that moment. “I didn’t know what stand-up comedy was, but this guy was just talking about my life stuff.”

The passion of these entertainers is apparent the moment they walk onstage. Comedy is hard work. You don’t have closed-door jam sessions, so each joke has to be perfectly crafted by performing it live, failing time after time until it finally gets the desired response. The pure drive to keep getting onstage and perform is deeply rooted in a love for comedy as a genre and an art form. Smith, who is often wildly irreverent onstage, loves the ability to have a chance to talk about dark (understatement) and demented (also an understatement) ideas. “It’s a great vehicle for my creative energies,” he says. “I love putting out my strange ideas for others to sample and make connections with complete strangers. It can be really brutal and alienating, too, but those times when I’m landing jokes and people are willing to go on a strange, dark ride with me fills me with religious ecstasy.”

The love for the stage among this ragtag group of eight is abundantly clear. Stephenson recounts the thrill he gets to keep him going: “The adrenaline rush when you’re onstage and the audience is laughing so hard you have to stop,” he says, “it’s like the best drug I’ve ever done.” In a similar sense, Whittaker says, “There are times that I’m so frustrated throughout the week that I just can’t wait to get up onstage and get it out.” It’s great, he says, “because you’re amongst a family that understands where you’re coming from.” All the comics seem to agree. “The best part,” as Mower puts it, “is the variety we have and the people I’ve met.” With such variety, you’ll never know what to expect. Stephenson says, “Come with no expectations. Leave your expectations elsewhere. Have an open mind and follow along with the story.” Their stories will become new references in your stories, and who knows? Maybe the next person to inspire new generations of comics will be right here in our own backyard.

You can check out some great local comedy podcasts—like Sketch Sandwich, Stupid Questions with Jason Harvey and the Geek Show Podcast—anytime on your favorite platform like Stitcher or iTunes. To really get the feel for the talent of the comedy scene at large, check out the weekly live shows featuring these wickedly funny comedians and others around the state: Weekly shows like Funny Fridays at Sandy Station feature a revolving arsenal of both local and out-of-town comedians, and monthly variety shows such as Dungeons and Comedy at Muse Music, You’ve Gotta Be Kidding Me and Comedy and Other Opinions at 50 West Club & Cafe provide new content at multiple locations from Provo to Ogden.

We Live for Funny: The Evolution of the Utah Comedy Scene
Diverse Comics: Something for Everyone in the Utah Stand-up Scene

Come check out comedians Joy Lane, Jason Harvey, Eileen Dobbins, Nicholas Smith, Natashia Mower and Christopher Stephenson with headliners Melissa Merlot and Jay Whittaker for a free show Dec. 17 at the Urban Lounge. Bring a friend and find out what really tickles their funny bone—you may learn a lot more about them than you ever wanted to know.