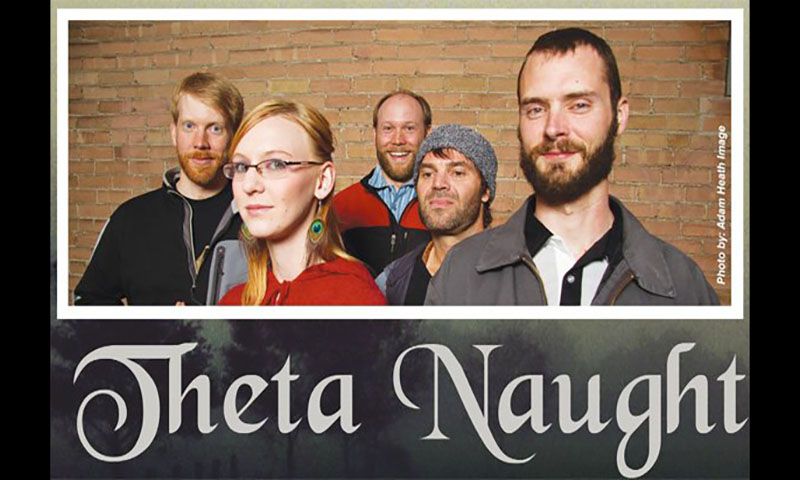 Localized is a monthly music fest spotlighting local bands. This month, SLUG brings you Theta Naught and Less People More Robots. Localized is the second Friday of every month at the Urban Lounge, a private club for members only. Come and see the SLUG staff do what they do best; get sloshed.

With only a vague description of their hair color and cut, I went out to find Theta Naught at Evergreen Café. We met for a late lunch and tasty vegan food.

Today, they are meeting me just before performing at their CD release party at Kilby Court and that performance is just before leaving for a tour of the West Coast. Meeting with each other was tight and it involved multiple phone calls and sundry machinations.

“Music. Improvisational music and some ocean sounds.” That’s what I would hear if I heard their album, they say. That is what I heard when I got home and listened to their album. The last time they went on tour, one of them recorded ocean sounds and they mixed it into their music. As might be gathered by the above statement, all of their music is improvisational and instrumental.

Their songs run anywhere from eight to 10 minutes. “The only structure that we have in our songs is that we say we’ll start in A minor and then switch to A major or C major. On this album, we really did some interesting things with different time signatures. I have a string of finite code for the Golden Ratio and my drummer and I turned that into a beat hitting on the ones and resting on the zeros.”

“It’s not that difficult to keep,” Darren elucidates. “I count it out in my head, ‘one-zero-one-one-zero-one-zero-one-one-zero.’” They have another time sequence based on the Fibanocci Sequence. It sounds mildly pretensious to incorporate these codes into your music, even though these concepts are far from obscure.

Their cellist, Peter, gets gushed about by the other band members and it seems that there is good reason for this. His knowledge of cello started at so young an age that he does not recall it.

“I can’t remember, honestly. I started playing the violin when I was about three and then I started playing the cello because I wanted to sit down. I was tired of standing up. To be a classical musician. you have to totally limit yourself to one field and discipline yourself. I’ve never been able to do that so it’s nice to play with these people.”