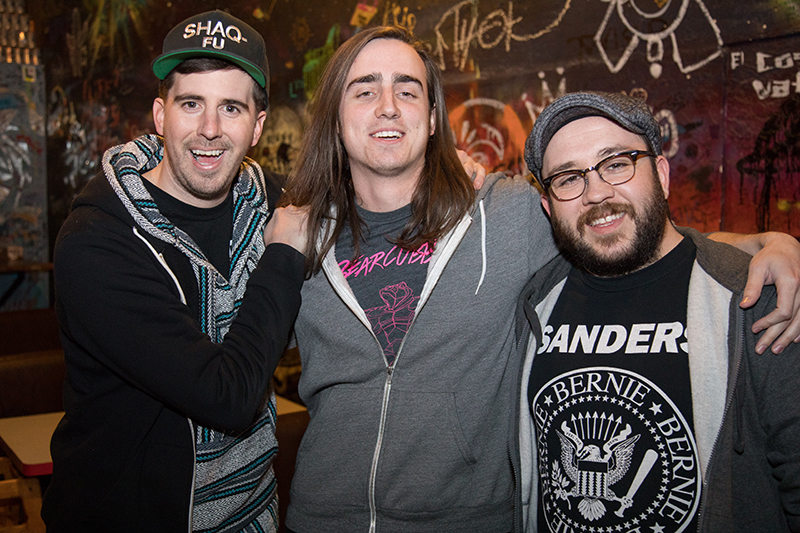 After coming off of a harsh and bleak winter season with downpours of thick snow, the worst inversion in recent memory and the ever-daunting national tension that came with this previous election, it’s nice to know that events like SLUG Localized are still around. March’s Localized showcase consists of wildly abrasive, folk-infused punk rock from Scary Uncle Steve and the calming, melodious, pop punk sounds of Wicked Bears, with old-school punk/ska powerhouse The Avenues supporting. As usual, SLUG Localized will be held for free at Urban Lounge on Mar. 16, and is sponsored by Uinta Brewing Co., High West Distillery, KRCL 90.9FM and Spilt Ink SLC.

A few months ago at a local punk rock show, I heard Wicked Bears for the first time and, honestly, I hated them—but not for the reasons you’re probably assuming. As I watched their set, getting drawn in by their catchy hooks, melodic guitar playing and the crowd singing their lyrics verbatim, all I could think was, ‘‘God dammit! This is another band whose lyrics I need to memorize!” They were that good. That same night, Casey Keele (bass/vocals) was talking about all the good music that has been coming out recently from all these bands he loved and how overwhelming it was to listen to and to really absorb it all. Needless to say, our minds were on a similar plane.

As I walked in through the doors of the Pie Hole, greeted by the aroma of pizza dough, cheese and pepperoni, I thought to myself, “Is there any place more fitting to interview a pop punk band?” But don’t let this coincidence distract you—that’s about as cliché as these guys get. Wicked Bears have mustered up a sound all their own, drawing inspiration from new-school pop punk greats like Direct Hit! and The Menzingers as well as ’90s classics like Green Day and Blink-182. Stemming loosely from one of Ken Vallejos’ drumming DVDs, the name Wicked Bears surfaced from an autocorrected text message. “I was texting my old band about a drum DVD I have that focuses on punk and ska drumming called Wicked Beats, and it autocorrected to ‘wicked bears,’” says Vallejos. “I showed it to Nick [Fleming (guitars/vocals)] and we dibbed that whoever started a band first would get that name.”

The trio had known each other for quite some time in the local punk rock scene, with Fleming and Vallejos both having played in the Salt Lake ska treasure Show Me Island, but Wicked Bears came together through Keele’s and Fleming’s mutual love of pop punk. “I was listening to Spotify, and it tells everyone what you’re listening to,” says Fleming, “and Casey saw that I was listening to Masked Intruder and he was like, ‘Dude, let’s start a pop punk band!’ I agreed, and I got Ken to play drums, and here we are.” One week after their formation at the band’s first practice session, they wrote and completed their first song, “Sometime Tomorrow.” “We kind of jumped into the deep end of the pool,” says Keele. “It was like, ‘We’re doing pop punk,’ and we wrote that song, and it felt like we were going hard.”

In late 2016, Wicked Bears released a six-song, self-titled EP comprising themes of existential dread, the 9–5 workweek, anxiety and Mike Piazza. In traditional pop punk fashion, the lyrics hit on some dark subjects, but the music sounds so fun and happy that most people won’t notice at first how grim the songs are. “We wrote it really quickly,” says Fleming. “I feel like I rushed everyone into the studio just because I wanted something to go online and so I could stop asking people to like my band on Facebook [facebook.com/WickedBearsSLC] without them having any idea what we sound like.” They recorded their EP in two days and released it on CDs through the Boise-based indie label Hidden Home Records.

With one EP locked in the catalog, Wicked Bears will continue on with new material well into 2017—they are writing for another EP and a split 7” with a band that is yet to be determined. “We have a few songs. We’re going to try to do five or six more,” says Keele. “We’re going to try to release them if the stars align. If you’re doing two releases in one year, the planets definitely have to be in order. It’s hard to do, but we’re gonna try.”

While writing and recording has eaten up much of the band’s time, they still managed to pull off a 10-day tour of the Pacific Northwest. The tour, while short, did spawn some incidents worth recounting. “Our van got broken into in San Francisco, and Casey’s laptop along with Nick’s clothes were stolen,” says Vallejos. “We actually lucked out because all of our gear was in the back, and none of that was stolen.” They were supposed to play in Reno from there, but a snowstorm in Donner Pass didn’t sit well with their busted window, so they had to cancel. “We would’ve done it if we hadn’t had that broken window,” says Keele. “We weren’t paying attention—a bunch of Utah boys in San Francisco leaving their laptops on the seat of the van—but you live and you learn.” Vallejos pointed out that the more that bands go on tour, the more these things will happen to them, and that they just have to be prepared. As shitty as the situation was, the band has definitely taken it in stride, and it hasn’t put a damper on their willingness to push on as a band, let alone to tour.

Wicked Bears are pretty compliant when it comes to playing local shows, so you can expect to see their name pop up on the roster for most underground punk shows. Regardless, come see them in all of their wicked glory at the SLUG Localized showcase on March 16 at Urban Lounge.