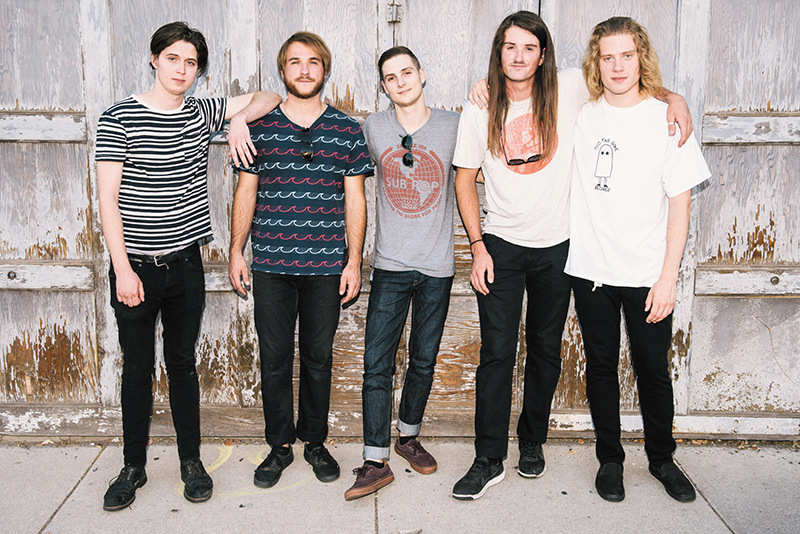 Local indie-rock group Your Meteor began as the brainchild of Andrew Goldring, Thomas Roberts and Zeke Hartmann in 2010, morphing over the course of six years into a quintet characterized by irregular time signatures, intellectual conceptual themes and an affinity for concise songwriting. Incorporating a wide range of influences including Joni Mitchell and ’70s rock, Your Meteor dynamically present a non-linear indie-rock style that combines elements of jazz, math rock and character-based storytelling. The result: a honed, singularly unique sound—albeit not without its deviations.

The inception of Your Meteor can be traced back to when Goldring heard vocalist Roberts and guitarist Hartmann (who have been writing music together since childhood) playing at Sugar House Coffee in 2010. “Eventually, I ran into Thomas surfing Facebook one night, and he invited me over to jam—which was the first time we ever met,” says Goldring. What started as a friendship would eventually morph into a full project, with drummer Goldring, guitarist and vocalist Roberts and later, bassist Hartmann recording in Goldring’s basement. “We started recording stuff in my basement in 2011,” says Goldring. “Zeke would … just blow in and destroy the bass line to a seven-minute song and then blow out.”

The group went on to play its first show in 2011, switching between different lineup changes, but eventually, it was the Goldring-Roberts-Hartmann trio that forged the foundation of the band. After releasing two albums during 2012, the band took a hiatus to focus on their most recent release, Byzantium, which was released in January of 2016.

Blood, sweat and tears would comprise the lengthy crafting of Byzantium. “We took a year to write the album, a year to record it, and a year to try to promote it and raise the money,” says Roberts. And with good reason, because Byzantium is an artistic chef-d’œuvre on every level. Mixed and mastered by Philip Shaw Bova (Bahamas, Feist, Andy Shauf), Byzantium narrates the story of a family whose character names are listed and defined on the first page of the vinyl insert, which also includes written stage directions preceding the lyrics of each song. “The whole thing is effectively a musical,” says Roberts. “We’ve theorized about holding casting auditions for people to perform it, but the amount of time and effort to go into a production like that would be insane.”

Divided into two acts, the album revolves around Byzantium, which later became the ancient city of Constantinople. “The whole idea of Byzantium is that it’s the longest-standing empire in the world,” says Roberts. “It stood for 2000 years—yet it fell from the inside. You can be in the perfect geographical location and have walls to keep out your enemies, but you’re going to fall from within eventually. There’s always going to be some unforeseen, cosmic chaos interrupting your course.” Even the album cover, a watercolor piece by artist Aaron Wolcott, reflects an eerily serene street scene of ancient Byzantium (with the Hagia Sophia in the background), similar to a ghost town that had once been the thriving epicenter of a nation before its untimely desertion.

Byzantium pursues a musical trajectory via concise, layered guitars set amid the borderline choir-like lead vocals of Roberts, which in turn are tastefully supplemented by the rich vocal timbres of Hartmann and Goldring. Completely recorded and produced in Goldring’s studio, SOUNDCAVE, Byzantium moves with an irreligious camber through nontraditional time signatures, dynamic jazz drumming styles and slight noir-pop melodies that waver with underscored intensity—a feat only made possible with a well-executed series of relentless, perpetually catchy bass lines.

Your Meteor are currently working on two new projects, one of which is a six-song EP. “It’s going to be a little bit darker than what we’ve done before,” says Roberts, “and perhaps a little scarier.” But don’t peg the band’s indie-rock goth future quite yet: Your Meteor are simultaneously working on an alternate project that encompasses a lighter approach. “The record after this EP—which we’re working on—will be something along the lines of prayer songs. I want to talk about all the good things that I want to happen—yet in a way, that makes it seem like they’ve already happened,” says Roberts. “It’s going to be quite a bit more progressive, too, with a lot of different time signatures and an emphasis on positivity, as opposed to all that dark shit. And unlike Byzantium, which was character-based, this project will be autobiographical in nature.”

Both projects have recruited the talents of current keyboardist Christian Lucy and bass player Ajl Anderson, who effectively round out the quintet. And if the attention to detail exhibited during the craft of Byzantium is any indicator of what’s to come, it’s inevitable that these projects will inevitably be impossible to ignore.

Listen to Your Meteor’s dynamic, conceptual indie-rock tunes by visiting their website at yourmeteor.com.