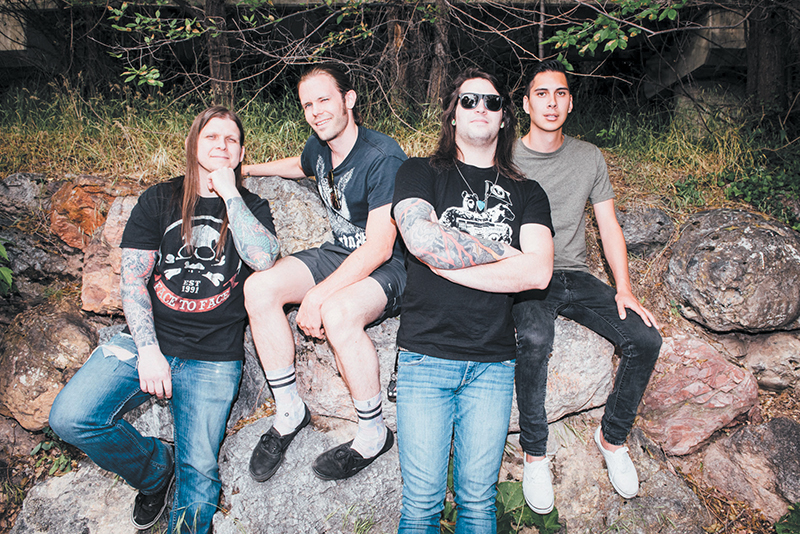 For July’s SLUG Localized showcase, prepare yourself for a plethora of gut-wrenching, spine-tingling, horror-themed punk rock from Salt Lake’s own Zombiecock, joined by metal-tinged hardcore punk from the publically elusive Goatsifter, with support from the pounding, doom metal riffage of Yeti Warlord. If you’re looking to leave the normal world behind, come hang out in a sea of madness where abnormality is king on July 14 at Urban Lounge, sponsored by Uinta Brewing Co., KRCL 90.9 FM and Spilt Ink SLC.

I remember when I first heard the name Zombiecock. It was a name that didn’t put the most pleasant of images in my head when I really thought about it, and most people had expectations of Zombiecock being either a really funny band or a really twisted band—the truth is, they are a little bit of both. Zombiecock came together in 2012 through Willie “Wolfbite” Hatton-Ward, Ryan Davies, Alex Hansen and Nic Battad. After two years of playing covers from Blitzkid and the Misfits, they started creating a combination of rancid, metal-driven guitar riffs and melody-heavy hooks evocative of their influences, Teenage Bottlerocket and Bad Religion, and rounded it out with lyrics about graveyards, ghouls and undead entities. “Everyone has different musical backgrounds,” says Hansen. “I’m old-school punk and Ryan is more metal, so it’ll be like, ‘I wrote this riff,’ and we just build on top of that and then, next thing we know, we have a song, and whether it’s rock or metal, we don’t know.” Everyone has a hand in the songwriting process, giving each song its own, unique feel. “That’s why all the songs sound different,” says Battad. “We have different people starting the foundation of them.”

Their musical diversity certainly shows in their EP, Zombies Love Punk Rock, in which I would find myself swaying back and forth one minute and then headbanging the next. Songs like “Awake the Dead” and “Shadows” keep a solid mid-tempo beat with melody-heavy vocals but also include a live favorite, “Rest in Pieces,” which just chugs from start to finish, and the rapid “Slow Death,” which was written by Davies in only 10 minutes. “It was like, ‘I’m pissed off today; here’s a song,” says Davies, “and it’s the only song I wrote that didn’t go through 5,000 different revisions—that never happens.” As if that wasn’t enough, Zombiecock are keeping busy with new material. With the expansion of their musicality and growth as a band since their EP, their new single, “Sharpened Teeth,” already seems to be creeping into new territory with emphasized metal riffs and machine-gun drumming that switches tempos on a dime. The vocal melodies haven’t lost any of their catchiness, nor have their lyrics lost any of their horror-filled substance. The track also includes Hatton-Ward testing his new style of using lyrics to tell a story. “Sharpened Teeth,” along with one other unreleased track, “Your Own Demons,” will appear on their upcoming self-titled album.

While the new CD is top priority for the band right now, they can still be found lurking around many of the alcohol-dispensing venues of SLC, most notably A Bar Named Sue, at which Zombiecock has become one of their house bands, after their old stomping grounds of The Woodshed shut down. “The Woodshed was our home, but A Bar Named Sue was, too,” says Hansen. “They’ve been booking us here since we first started, when we really sucked balls. They stuck with us the whole time, and it means a lot to us.” With the new album coming out, Zombiecock have put together a free CD-release show at Urban Lounge for its celebration, though any touring stints are on the backburner for the time being. “As soon as we get all this done, we’re thinking of maybe going up to Idaho and maybe Vegas,” says Davies. “We do need to get out of state—a small tour is in the works, but we need to finish what we have got now.”

Zombiecock will unearth their new album Aug. 10. If your thirst for Zombiecock’s spittle of macabre cohesion cannot be quenched by then, come out to the Urban Lounge on July 14 to see them headline the monthly, always free SLUG Localized showcase with Goatsifter and Yeti Warlord. Zombiecock will slake your lust for B-movie spatter with their use of ghoulish face paint and a liberal dosage of fake blood for a thorough and, if you will, zombifying performance. If ever you, dear readers, feel the need to veer into the ghastly musical enterprise of Zombiecock, give them a listen at zombiecock.bandcamp.com.