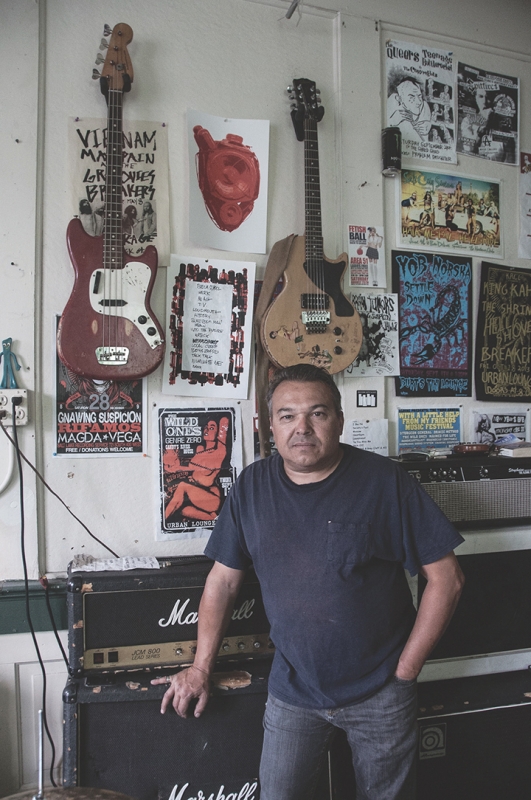 A Little Help From My Friends

The idea for Aldine Presents: With A Little Help From My Friends actually sprung from another event. In August 2010, several bands from the old Salt Lake punk scene staged the Zion Curtain Family Reunion with Massacre Guys and others at the Rim Rock Inn near Torrey, Utah. Jon Sabala, who owns the Rim Rock, let the organizers of that event use the patio and other spaces near the inn. Aldine Strychnine, known for his own musical contributions to Maimed For Life, House of Cards and numerous other local bands, put together an open jam at the end of the event. A repeat of the event wasn’t expected till 2012, so Strychnine talked to Sabala about putting together a similar festival of his own.Strychnine says that Sabala showed a great interest in that, and thus, Strychnine’s With A Little Help From My Friends festival was born in 2011.This August will be its fourth anniversary, and Sabala has added a covered stage, dance floor and lights to the performing area. “Bands play with the stage facing toward the desert, and the sound just echoes out,” Strychnine says. “It’s a perfect location to have a music festival.” At 7,500 feet, it’s cooler than the typical, sweltering Utah August weather. Lodging accommodations feature discount rates for the weekend, with a Best Western in addition to the Rim Rock.The first year’s lineup featured Rifamos, The New Evils, Electric Space Jihad and others. The second year included The Boards, Dwellers, Gnawing Suspicion, Salt Lake Spitfires, Avon Calling, Handicapitalist, Ridmission and Discoid A. 2013 grew to add Sturgeon General, Draize Method, The Wild Ones, Maimed For Life, Braindead Constance and Suspicious Sound System. The festival has provided a springboard for some of these bands who hadn’t played together in years, and has played a big part in keeping the older and still vital segment of the local punk rock scene alive—a generation that had a big influence on the kids who came up in following years.This year’s lineup isn’t set at press time, but so far, he’s confirmed Los Rojas, Magda Vega, Draize Method, High Horse, Reverend Dan Morley, a reunion of ‘90s band Big Face, Maimed For Life and the Gnawing Suspicion/Suspicious Sound System collective. On Friday night, when people are still arriving and getting settled in at lodging or camping, there’s a jam that’s open to anyone, and a few extra instruments are available. The music isn’t all punk rock either, and fits under the “alternative” moniker, from the instrumental garage rock of Rifamos to the surf-tinged rock of The Boards and the reggae-influenced Suspicious Sound System, and even some acoustic jamming. It’s a cross-section of the local music scene, only somewhat weighted toward the punk end of the spectrum. The traditional connotation of the event’s title isn’t accidental, but a reminder of Strychnine’s formative years listening to ‘60s and ‘70s rock, and the fundamental influence on local musicians. The fest isn’t all old bands—he is excited about newcomers Braindead Constance and a few other younger musicians at the fest.

Additionally, this isn’t just a bunch of old punkers making noise outdoors—it takes place in front of one of the most beautiful backdrops on earth, in Utah’s red rock country near Torrey and Capitol Reef National Park. “It’s magical just being there,” Strychnine says. “To add the music is amazing. If your heart lies there, in the desert wasteland that has a stark beauty to it, it’s an incredible spot.” There are a number of hiking and horseback trails to explore while there, and the end of the rainy season finds late August remarkably green.

It might sound like a miniature outside, punk rock version of Woodstock, but it’s the “Friends” aspect that makes it special. The event has been promoted mostly by word of mouth, though, this year, it has a Facebook page, and everyone’s time is donated—a labor of love. Performance Audio lent a PA the first few years, and sound techs Jeff Kimball, Herc Ottenheimer and John ‘Rutabaga’ Reese have helped make everyone sound good. Some footage has been filmed, and Strychnine hopes it’ll be edited and released soon.

Strychnine notes that, although there is drinking in the hotel restaurants and some people bring beer camping, it’s a family-friendly event. “Everybody brings kids,” he says, and that’s part of the fun as well—it feels like a big, extended family. This event continues a tradition of local music camping fests that goes back to the “mountain shows,”“desert shows,” Wizard Fest and others, going back to the 1990s and earlier. With a few dozen the first year, last time, about 150 people attended, and Strychnine says, “If there were more than a few hundred, it might lose its charm.