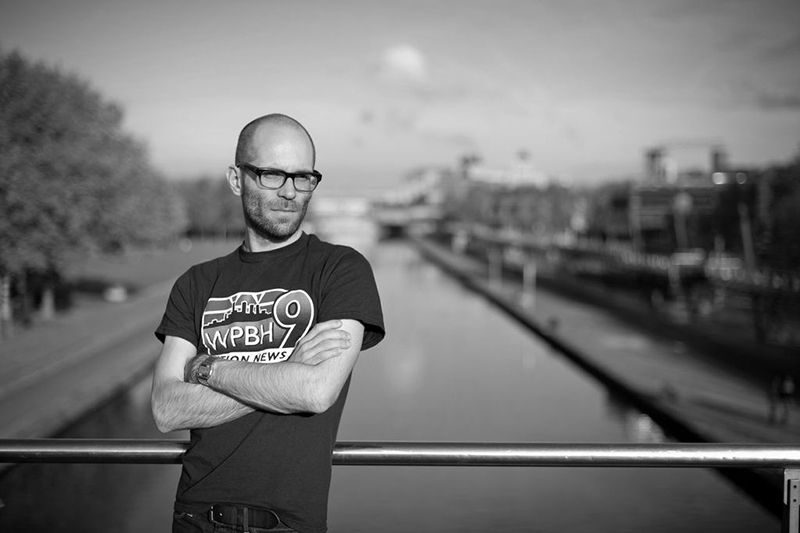 A Real Hero: Interview with David Grellier of College

If you’ve seen the movie Drive, then you’ve heard the music of David Grellier. Grellier is a French electronic composer and the founder of the retro-futurist music collective known as Valerie. Valerie has been an exciting side project for Grellier, but his international success has come from the electronic nostalgia and prowess of his work as College. College is an alternate universe where Grellier does exactly what he says he does: “I present visions of the past.” During our chat, Grellier spoke with SLUG about the films and childhood inspirations behind his music. Through our conversation, I came to understand what inspired “A Real Hero,” the song that garnered Grellier a worldwide fanbase. Grellier is the personification of that song in my eyes. He has toured America twice as College, and he’s about to embark on his third U.S. tour, on which he’ll make his Utah debut. Grellier will play at Kilby Court on Dec. 7, and I’m sure he’ll fascinate the minds of everyone in attendance.

Ever since “A Real Hero” captured the emotional depth of Drive, Grellier has been in a different spotlight. It is one of the best electronic songs I’ve ever heard, but an unusual song for Grellier due to its use of voice. Grellier prefers to compose instrumental music, not just because he’s nearly perfected his aesthetic, but, as he says with a chuckle, “I just can’t sing. I’ve tested it.” His honesty and humility in statements like this are what impressed me most about him. “Several French directors reached out to me after Drive’s release, but I don’t want to write a score,” says Grellier. “It usually needs to be done in a hurry because the film has already been made, and you have to match the songs to each break in the scenes. I don’t like adding that technical aspect to my music.” The statement intrigued me, and I can’t help but respect his point of view—he’s not so much concerned about the challenge of creating a score as he is concerned about interrupting the free-flowing process that he follows to create his music. “Music is my escape from formal creation,” says Grellier. “It’s a weird feeling to be able to create emotion.”

Grellier is inspired by old films, such as Mad Max, because they portray characters that accomplish superhuman things, all while being able to die at any moment like the rest of us. “Mad Max is a beautiful film,” says Grellier with a smile, “Heroes today, in most movies, are super heroes. They’re not real people.” Grellier is obsessed with nostalgia and preserving memories of childhood. “It’s not easy to hold on to good memories of childhood like the TV shows and movies we watched when young,” he says. “The purpose of College is to try and preserve those things. I don’t want to recreate the past. I just want to express something of today with tools of the past.”

As you might imagine, Grellier’s live performance will be accompanied by visuals, but they won’t be scenes from old movies or other pulled sources. He has commissioned designer Alexander Burkart for College’s album covers, which draw from ’80s noir and spy novels. Burkart has also worked to create original visuals for the show that will bring the universe of College to life. “I want to feel emotion from the crowd,” Grellier says. “I want them to dance. We played a show in Portland, and the audience stood there the whole time with big, glassy eyes. I had no idea if they enjoyed the show, so I asked a few people what they thought, and they said that they enjoyed my performance very much.” He asked me if people in Salt Lake City prefer to dance at shows—I told him that most of the time they do, but it just depends. I know that I’ll be dancing when College comes to Kilby Court. It’ll be a privilege to have an electronic musician of his caliber play one of the most intimate venues in our city.

When I asked Grellier about the future of College, he excitedly told me about his ideas. “I want my next work to explore the ambient possibilities of synths, like Brian Eno, and leave conventional rhythm entirely.” I asked Grellier if this next EP, which will be released on Nov. 10, would feature a new direction in ambient music. He laughs and says, “Not quite, but I like to preserve some mystery.” I guess the only thing left to do is to show up on Dec. 7 and see just how much of that mystery Grellier is willing to unfold. Until then, visit soundcloud.com/college to hear some highlights from College’s current catalogue that are sure to keep you spinning through time in preparation for the show.