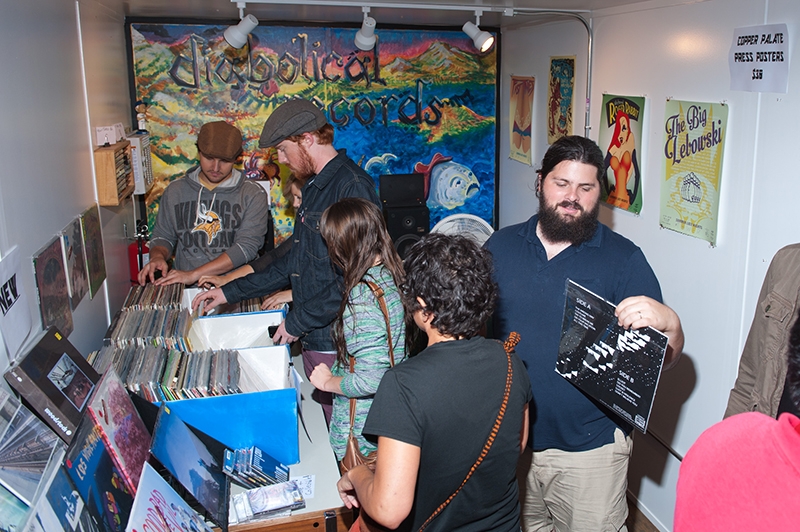 A Shipping Crate Full of Record Crates at Diabolical Records

Adam Tye and Alana Boscan opened Diabolical Records this past July 5 in the new Granary Row. In a short time, they’ve already established a good following among local vinyl enthusiasts and people eager to support any shop adding to Utah’s relatively scarce options for places to buy albums. They’re exactly the kind of people who should be running a record store—kind, enthusiastic, knowledgeable and dedicated to creating a homey environment for those interested in discovering new music and obscure bands, or having a good conversation about records and Tommy Lasorda.

I went to high school with Boscan, who, at some point early in our freshman year, lent me a copy of Purple Rain—Prince has a way of cementing a friendship. We were in the same social circle, one that basically had music to credit—or blame, depending on who you were to ask—for existing at all. So, I was happy to hear about Diabolical opening. I’m certain that many people will be thanking Tye and Boscan for recommending records that help to improve multiple existential conditions.
Tye and Boscan married three years ago, and had already been considering the possibility of opening a record store. “We’d been trying to figure out the right way to do it forever,” says Tye. “Owning a record shop always seemed like the best life.” Optimism and ambition count for a lot. Tye mentioned that getting distributors was more difficult than he’d initially expected, but they ultimately managed to work that situation out. In the meantime, Community Records sent a few free LPs to help the shop get its start. They’ve ordered directly through a few labels—Burger, Slovenly—and are in the process of building relationships with others, such as Sacred Bones, another label with a similar aesthetic whose music they’d like to start carrying. The couple name Thee Oh Sees, LCD Soundsystem and Deerhunter as some favorite music they’re constantly listening to—but “Tom Waits tops that list,” Boscan says. It helps that the records found on Diabolical’s shelves tend to be those Tye and Boscan are listening to themselves. “Personally curated” shops—done right—tend to be the most enjoyable to spend time in, because they reflect the owner’s personality and provide a more unique experience for the customer. Diabolical holds true to this idea­—on a poster above the local music section, Tom Waits grins at customers entering the shop. A mural in the back of the space, in the listening area—which makes use of an upright turntable—provides more ambience, as do the film posters, courtesy of Copper Palate Press.
It took about a week to secure their spot at Granary Row. “Space was available and affordable,” Boscan says. They also appreciated the concept behind the space (see granaryrow.org). The process for acquiring the store’s location involved providing a mission statement and list of goals, which won them the spot. The two agreed that the public’s reaction thus far has been very positive. During my visit, Granary Row’s manager stopped by to see how everything was going, a volunteer from the Humane Society walked by with a dog to say hello, and families passing through looked into the shop. All of the vendors seemed familiar and friendly with one another. Tye and Boscan agree that for new stores, an overall mentality of cooperation rather than competition among the owners would be more positively productive for everybody. “We want to be able to tell people that if we don’t have it, to go to Graywhale, Randy’s, etc.,” Boscan says. Ideally, that support would be reciprocated.
It’s readily apparent that Tye and Boscan strive to bring people together. They hope to establish a trusted opinion in the community, so a band that has their support or promotion can look forward to having more people listening to their records and in the audience at a show. One of his main goals, beyond the shop, would be to see more obscure bands play in Salt Lake to larger audiences. The couple hope to eventually contribute to the creation of a music festival in Salt Lake. Caddywhompus (New Orleans)—which Tye referred to as one of his recent musical obsessions—”is a band that people here would like, if they could actually be heard,” he says.
One of Diabolical’s more immediate concerns, at the time of this interview, was finding a permanent location, as Granary Row closes on Nov. 3. They showed me a building within walking distance from the current shop that looked like it could be a great space for them to expand on their vision. Boscan says, “Our big idea, if we had all the resources possible, would be a large store, with a venue—preferably that serves beer.” On Nov. 4, Diabolical Records will be opening at a new, yet-to-be-determined permanent location, and the couple hopes to fill it with help from the community via an Indiegogo funding campaign you can link to through their Facebook. Their interest in making sure people are happy and comfortable in the space they’ve created, along with their dedication to achieving the goals that have led them this far, should mean great things for the future of Diabolical Records, so go help them out, and keep an eye out for their new spot. Find them online at facebook.com/diabolicalrecords and on Instagram @diabolicalSLC.