SLUG Mag Soundwaves
Episode #392 – Homephone
00:00 / 17:29
Spotify Stitcher
RSS Feed
Share
Link
Embed
If you thought punk was choking on its last breath, you would be very mistaken. At this very moment, there is an invasion blazing its way through the United States, and it’s centered around punk quartet Zex. Based in Ottawa, Ontario, Zex has begun making radical waves in the punk community through the release of their debut album, Fight For Yourself. 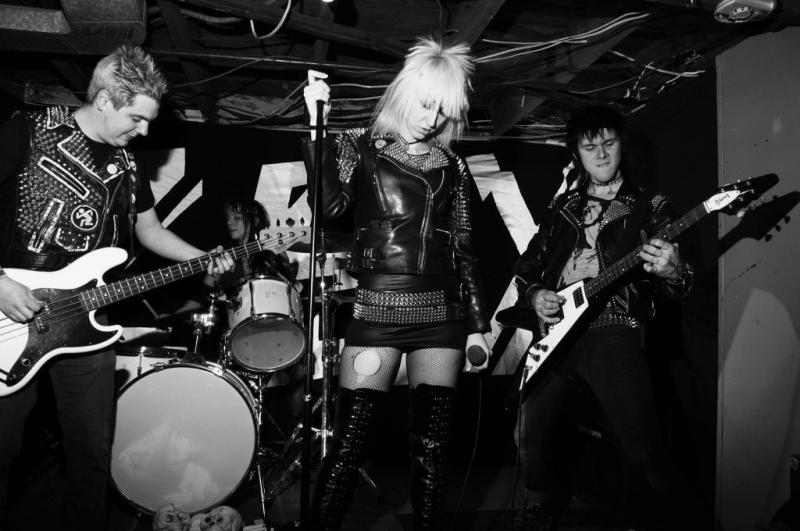 Zex will be rolling through Salt Lake City on June 2.
If you thought punk was choking on its last breath, you would be very mistaken. At this very moment, there is an invasion blazing its way through the United States, and it’s centered around punk quartet Zex. Based in Ottawa, Ontario, Zex has begun making radical waves in the punk community through the release of their debut album, Fight For Yourself. It was originally an independent release in October 2014. However it soon gained notice, and Zex was picked up by Magic Bullet Records, who re-released Fight For Yourself in February 2015. “I think somebody else kinda went behind the scenes and talked to Magic Bullet for us,” says Jo Capitalcide. “Essentially, they got a hold of us and [said], ‘Hey, we’d like to redo this record and help you out.’”
Zex has found that their debut album had received generally positive reviews from music critics. Prior to this interview, I gave the album a few spins for good measure. Fight For Yourself is the perfect example of the UK 82 punk rock sound and style in the cotemporary form. It has 10 solid tracks that preach the message of individuality and youth rebellion. Their punk anthems are spot on and done in a refreshingly unique style. I would be hard-pressed to find other bands in this genre that are able to come as close to their level of sincerity. Capitalicide says, “The concept is not to copy anything, just do your own thing.” The title track “Fight For Yourself”—written by vocalist Gretchen Steel—is about taking responsibility and stepping up for your own life, while “Screaming at the Wall”—written by Capitalicide—is about the frustration with feeling that nothing gets accomplished and attempts to create change are in vain.
To get to this near-perfect sound, Zex spent almost a year practicing before actually playing live. “Ideally, we should have practiced a lot more, and we still do. Recently, we practiced every single day for almost a month before hitting the road,” says Capitalicide. “I guess it’s a big contrast as opposed to most other punk bands […] They make up songs, and a week and a half later, they’re playing a show.” Given the rate at which things are moving for Zex, it would certainly seem that their rigorous devotion to crafting their sound has been paying off.
Before their U.S tour, Zex took on the Pacific for their Wanderlust tour. After a brief stop in China, they played a string of dates in Australia, New Zealand Singapore, Malaysia and Indonesia. In Indonesia and Malaysia, Capitalicide took particular notice of contrast between the local punk rock scenes there and at home. “Religion and Christianity is stigmatized as taboo as something that’s inherently against the values of punk rock and anarchism, but over there, in Southeast Asia—in Indonesia and Malaysia—it’s not uncommon for people to be Muslim […] People still adhere to the religion and, at the same time, have punk values. That’s always strange to me,” says Capitalicide. “They can’t let go of those values. They could be disowned by their communities, [or] by their families. There’s a lot of pressure.”
While touring, Zex played a number of small towns and attracted diverse audiences to attend their gigs. They found themselves playing to all kinds of scenes that ranged from straight edge to crust punks. During the tour, Zex generally felt accepted wherever they played. “The only negative feedback we got was from real fat Australian Tourists,” says Capitalicide. “Otherwise, everyone was more than kind to us.”
After returning to Ottawa from their successful tour, Zex wasted little time in getting ready to take on the United States. Unfortunately, before the tour could begin, the bands longtime friend and Wanderlust touring drummer Vassil Mester passed away on April 2. Zex created a video comprising footage from their tour in dedication to their comrade.
Their invasion of the United States started on May 5, and they are currently cutting a devastatingly awesome path on the way to the City of Salt. During the tour, Zex tries to find time to take in the sights and take a break from the monotony of playing gigs to stretch their legs. “Whenever we get time, we manage to do things—just checking out historical places, stuff like that—you know, having fun,” says Capitalicide “We usually try to avoid parties and all that stuff. That gets old really fast, especially if you’re doing it seven days a week.” After the U.S tour ends, Zex will be planning another two tours and celebrating the release of yet another new single called “Fear No Man.” The new single will be distributed by Loud Punk Records.
Zex is due to reach Salt Lake City on June 2 to play the Music Garage with locals Repeat Offender and All Systems Fail. I’ve heard of their legendary high energy performances and asked what Salt Lake City can expect from a Zex gig. Capitalicide says, “Expect the unexpected.”
Photos: