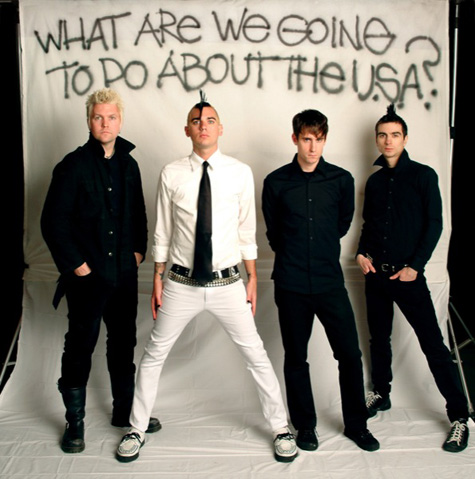 Activist Rock: An Interview with Pat Thetic of Anti-Flag After more than a decade and seven albums of spitting venom at the institutions and government of this country, Anti-Flag seems like the perfect candidate for the label “America-haters” by right-wing radio neo-cons. In some ways, that label is correct. “I hate the America that is greed-fostering, exploitative,” says Pat Thetic. “America, the hating America that won’t accept gay people, people of different religions and ethnicities. That’s the America that I hate.”

Anti-Flag’s newest album, For Blood and Empire, is a slap in the face of the things that they hate, the Iraq war being one of them. The first song on the album, “I’d tell you but,” is an anti-war song told through the viewpoint of a victim of war.

“I’m dead! I’m dead… Your bullets cut into my flesh. Your cluster bombs ripped me to shreds,” vocalist Justin Sane sings. The album, released on Sony/BMG records, tackles issues from war to the capitulation of the press.

While Thetic certainly dislikes some aspects of America, his mannerisms, down-to-earth personality and gentle tone portray anything but the bile-filled hate-monger that some would paint him as. As he was approached by a throng of teens begging to be let in to Anti-Flag’s sold-out March 15 show at In the Venue, he spoke to them as a comrade, not a rock god. PT: I’ll do what I can, but I can’t promise anything.

He considers Anti-Flag–consisting of vocalist/guitarist Sane, Chris #2 on bass and vocals, Chris Head on guitar and Thetic on drums–to be a largely optimistic band. “We believe in the American myth that they taught us in high school or elementary school. We believe that everybody should have a chance and should have equal access to resources and opportunities,” says Thetic. “The reality is not that and we think that we should move toward a reality of people having equal opportunities and being treated with respect and having the same rights as other people.”

Anti-Flag decided to switch to Sony/BMG for their latest album in an effort to reach a larger audience with their message. “In our world, there’s a balance between activism and being in a rock band,” he says. “If you’re an activist, you take advantage of all opportunities to get your message out.”

During Anti-Flag’s Salt Lake City concert, there was a plethora of booths containing information on leftist politics. The band doesn’t rest on laurels created by a following that sold out the Salt Lake City show. Instead, they’ve formed A-F records and have signed various like-minded bands. They’ve also taken on various pet causes like www.militaryfreezone.org, a website that encourages the repeal of a section of the Bush administration’s No Child Left Behind Act which the website says requires schools to give students’ information to the military in order to receive federal funding. “We thought that it is not only an invasion of privacy, but a fundamental moral concern,” says Thetic. “We don’t believe schools should be funnels just to put people in the military. A legal request to opt-out from the military obtaining your records can also be obtained on the site.”

Thetic doesn’t restrict media bias to right-leaning sources. He believes all media, regardless of the political spin, to be inherently flawed. In order to make the country better in his eyes, Thetic asks that Americans be better information consumers. He says, “I would talk to people and just ask them to look for different sources of information and to realize that every outlet of information has an agenda.”