SLUG Mag Soundwaves
Episode #399 – Scott Lippitt
00:00 / 17:04
Spotify Stitcher
RSS Feed
Share
Link
Embed
If the old axiom, “slow and steady wins the race,” rings true, then All Systems Fail have certainly earned the blue ribbon 10 times over, and have given each one to the kids bouncing around house show living rooms and art shop basements. If you’re one of this odd lot who has never experienced All Systems Fail, now is a good time to do so. The band is a time capsule of sorts that belts out their original sound and embodies the ethos of punk times past, but they are also gradually sidling into a slightly updated articulation of All Systems Fail. 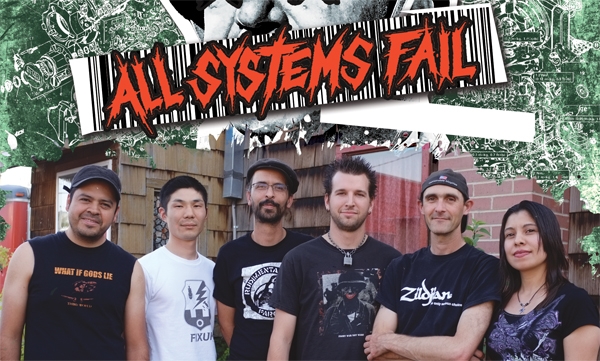 All Systems Fail have been a fixture of the punk and hardcore scenes in SLC for over a decade. L – R: Jorge Arellano, Keisuke Sasaki, Travis Nelson, Shaun Heth, Rich Caramadre, Lady Jess. Photo: John Barkiple

If the old axiom, “slow and steady wins the race,” rings true, then All Systems Fail have certainly earned the blue ribbon 10 times over, and have given each one to the kids bouncing around house show living rooms and art shop basements. After being a band for over a decade, All Systems Fail have become a fixture in the Salt Lake punk and hardcore scene. Gangs of riled-up punks huddle around vocalist Jorge Arellano to roar along to the lyrics that they’ve all come to know, as if he’s retelling all of their favorite bedtime stories. Amazingly, though many in the local underground would consider All Systems Fail the namesake for Salt Lake hardcore, drummer Rich Caramadre waves off the notion. He says, “One of [our] last all-age shows, we played with maybe four bands—local bands that I’ve never heard of … and I’d say half the people at that show probably hadn’t seen us before.”

If you’re one of this odd lot who has never experienced All Systems Fail, now is a good time to do so. The band is a time capsule of sorts that belts out their original sound and embodies the ethos of punk times past, but they are also gradually sidling into a slightly updated articulation of All Systems Fail. Although October will mark the two-year anniversary of the addition of second guitarist Shaun Heth, he is nonetheless a fresh face on the front line of a band that aims to play one show a month and that makes deliberate choices regarding what they add to their sound and overall persona. Bassist Travis Nelson says, “We’re pretty picky about [whom] we play with, so it took a number of years … Shaun had played in other bands in the past, and we had played with his bands, so we knew who he was and kind of what he’s about.” Heth has added a dash of his own guitar flair to new material, just as guitarist Keisuke Sasaki had upon joining All Systems Fail, but not so much that it would disturb the band’s sonic niche. All Systems Fail will also introduce an additional, part-time vocalist in the coming months, Lady Jess, the frontwoman of Digna y Rebelde, a previous project that also featured Arellano and Nelson. Lady Jess shyly states her aim in All Systems Fail as “just being myself,” so you wouldn’t expect her fierce stage presence—her round eyes and furrowed brow have underpinned a wildfire vocal delivery with each show. Caramadre looks forward to the new “layer” that Lady Jess will produce for All Systems Fail, and Heth adds, “There’s always female perspectives that you can’t, as a male, sing about.”

Given All Systems Fail’s unhurried pace and counter-political nature, the band is not hammering out any of their new material at this time, but await the next onslaught of political insipidness. Heth says, “You can’t force yourself to have statements. Things have to happen for you to be in force to want to talk about it … A lot of what’s been going is, pretty much, social [idleness]: not much progression. There’s the ‘We are the 99,’ and that’s just kind of pedaling along—who knows where that’s going to go … Lyrically, musically, society’s kind of in idle.” Of course, that’s not to say that All Systems Fail don’t have anything in the oven. Heth continues, explaining that they have written some new material that covers current issues: “Topics have to do with things like financial insecurities, like what people actually do when they think that they can’t survive anymore. At least with me, that’s been a topic of constant conversation.” All Systems Fail have also come to function as a sieve for otherwise forgotten issues with their long-standing songs, such as with “Paranoia,” which deals with the media hype over the swine flu “pandemic.” We can think of All Systems Fail’s work in terms of previous criticisms we have had toward similar issues that may come about in the future: “[The pandemic mentality] might come back in about 20 or 30 years, and we’ll try to make it up again,” says Arellano.

All Systems Fail definitely make their shows count not only during their performances, but throughout the entire show. The band exhibits a sense of humility and respect to all involved in the show. Nelson says, “The show is bigger than my band. The scene is bigger than my band. The person sitting in front of the stage is just as important as me. We’re the same. I don’t want to be that guy who just fucking takes off … Without an audience, bands are pointless.” Caramadre comments on how All Systems Fail still love playing all-ages shows, despite the dearth of all-ages venues, and attending shows in general. “I want to experience the other bands and the people. That’s important to me: the people there as much as punk rock music,” he says. All Systems Fail, in their endearing, blasé way, had not confirmed at the time of this interview that they will play Doom and Gloom Fest on July 20, but they’re sure to impress if they do. As they gradually introduce Lady Jess into the lineup, make sure to catch them at every opportunity this summer, as Arellano will be healing from surgery for three months or so come fall.