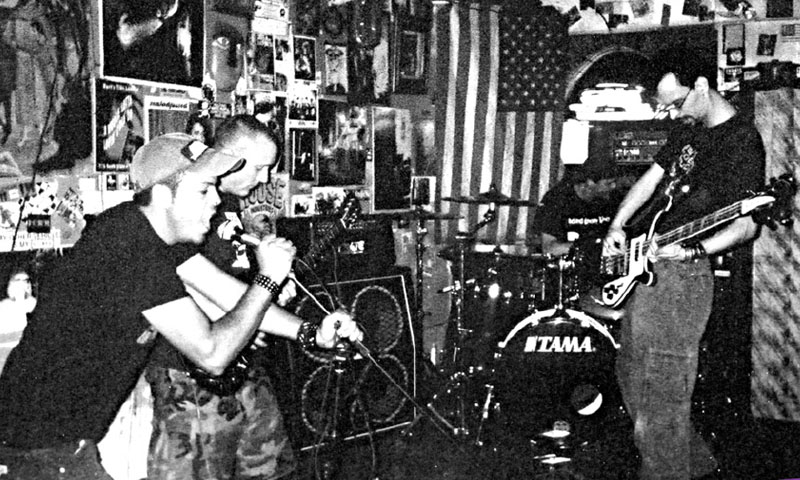 In a world of people that think a bowl cut and a wardrobe from Hot Topic is what punk is all about, the true essence of what the punk movement originally set out to achieve has been lost. Or has it? Not according to Salt Lake City’s hardcore punkcrust entity All Systems Fail. SLUG talked to Travis (bass, vocals), Jorge (vocals), Dave (guitars, vocals), Keisuke (guitars) and Rich (drums) for this exclusive SLUG Magazine interview.

SLUG: First, give me a brief history of ASF. When did the band form?

Travis: We’ve been playing for a while …

Rich: We’ve been together for two years now.

SLUG: Can you tell me some of the bands you guys play in/have played in?

Dave: Travis’ old bands N.S.C. and We All Fall Down were as good as any punk band I’ve heard, and Rich’s old band Aus Rotten is legendary!

Dave: Me and Keisuke were in a grindcore band when we went to SUU. We only played a couple shows; it was called Abomination.

Travis: Jorge has played in a few bands down in Mexico.

SLUG: Let’s talk about your inspirations, bands, things that piss you off?

SLUG: What about the current state of the world? Bush has been reelected, we’re at war, probably targeting Iran next and so on…

Dave: As much as the Bush Administration is full of shit, would it have been any different with Kerry? It seems like anyone who runs for president has got to be enough of a puppet for Pepsi, Coke and Wal-Mart. We definitely wanted to see Bush defeated, but Kerry’s just the lesser of two evils. I would say it’s entirely possible that the election was fixed. The Diebold Company that supplied the voting machines are staunch Republicans.

Travis: I think America will fall apart before we can do too much damage. We don’t have the money anymore or the moral superiority that we always say we have. People will have to live without a TV in every room, a hundred thousand-square foot house in the hills …

Dave: A Hummer with gold wheels … (laughter). Sooner or later, we’re gonna have to live like the rest of the world.

Rich: I think the rest of the world is catching up to us.

SLUG: Do you feel punk is dead?

Travis: I don’t know, I think in the states to some degree.

Rich: It’s not dead. It’s really big here in Utah if you’re into bands like Anti-Flag, Suicide Machine, etc. Go to a show and there’s a hundred kids there, but if you go to see a DIY band from another country that’s playing, you can’t get 30 kids to come out.

Travis: Back in the 80s a lot of bands played together and everybody enjoyed the music and the shows. I know bands now that would be horrified if they got called “punk”!

SLUG: So do you think kids these days can learn about what punk really is?

Rich: Maybe not all of them, but if we played a show the size of AFI and 10 kids walked away liking it, I’d enjoy it even more, because of what we introduced them to.

SLUG: So what about straight-edgers and militant vegans?

Dave: We agree with their views on animal rights.

Rich: I don’t think there’s anything wrong with the propaganda, but if you’re gonna beat someone up for it, that’s wrong. I’ve been vegetarian for 18 years, but I wouldn’t beat anyone up for it.

Travis: I think we all support that, without the violence.

SLUG: What are the plans for the future for All Systems Fail? Ozzfest, maybe?

Jorge: I’m releasing a 7″ by a Mexican band called Fantasmo, it should be out in January. All Systems Fail is recording in January, but we don’t know what we’re going to do with those songs; maybe a split 7″.

Rich: Then we’re going to Europe in May with a band from Pittsburgh that has former members of my old band Aus Rotten. We’ll be doing 17 shows.

Travis: Eventually we’ll record enough stuff that we’ll compile it all onto a CD; make it worth people’s money to buy. That might end up happening later next year.

Dave: Yeah, we’ll keep re-releasing it! How else are we gonna pay for our Hummer with the gold wheels?