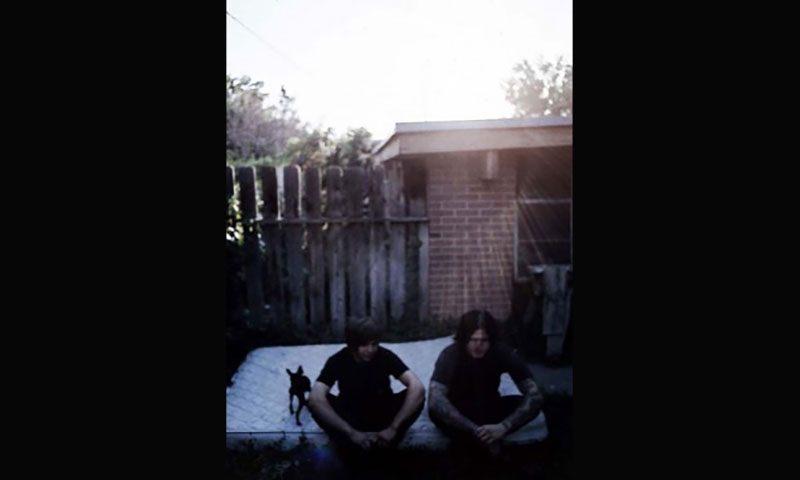 An Interview with Le Force

If there is one local group that would have been pirates in their past lives, Le Force fits the mold, from drummer Jud Powell’s chest tattoo of world maps to guitarist Erik Olsen’s scruffy beard to guitarist Chris Evans nursing a hangover. Their music can inspire pillaging, plundering and most of all, drinking.

Le Force plays like they drink; hard and fast; consequences be damned. They’re a shot of tequila rather than a wine cooler. I met up with the three band members on a front porch downtown to discuss their latest release, Le Fortress, on Wäntage USA Records and their plans to sail the salty sea with Satan.

Le Force have set themselves apart from other Salt Lake bands by providing a primarily instrumental band with two guitarists and no bassist. The music is only occasionally peppered with Jud’s manic screams. They let the blaring dual/duel guitars and pounding drums speak for themselves. The decision to become an intstrumetal band was an easy one.

“None of us can sing very well,” Olsen said.

Doing their ‘thing’ is garnering some attention for Le Force. When they recorded Le Fortress in 2002, they were able to gain connections to Josh Vanek of aforementioned Wäntage USA. Vanek liked what he heard and signed the band. Two years later, Wäntage released Le Fortress and the band plans to record another full-length this September.

The new album is a crash course in malicious metal. The first track, “We May Belong to You, but Our Souls Belong to Satan” begins the onslaught of doom, but the music is capable of melting into sulky melancholy with “Sometimes Everybody Needs a Tissue.”

“Two days before we went out [to record Le Fortress], we wrote [“Sometimes Everybody Needs a Tissue”],” Powell said. “We always try to do something a little bit different, kind of step out of our own boundaries. Plus, it’s so much like the emo wave. I think it kind of had a little bit to do with that too … I’m kidding.”

When Le Force plays live, you can expect some head-banging, someone throwing up the horns and some bitchin’ guitar. Olsen only expects one thing from his audience.

“We just want them to feel the rock,” he said.

Playing in Salt Lake has its downside, according to Le Force. They play often in their hometown, but putting shows together and making a little bit of cash can be difficult.

“The biggest issue is club owners not being fair with the groups, like letting people in for free or pinching money out of the door, shit like that,” Powell said. “I mean, shit like that goes down everywhere, but … It’s so hard, too. There’s a lot of clubs here now, but there’s very few good clubs.”

When a band plays metal, and plays it well, you can be assured Satan has a hand in it. Le Force didn’t actually sell their souls per se, rather, they lost it in a gambling bet.

“That bastard!” Olsen said in referral to Satan.

With the devil at the helm, Le Force will be hoisting up the anchors and taking off on a tour in October. Powell has been busy filming their live shows for a DVD and the album they will be recording in September is estimated to be released this winter. They are also planning the release of a 7″ in January that may be titled Seven Inches of Pure Love. The band is now capable of accomplishing all of this with backing from Wäntage USA and can expect a large distribution of their music and a larger fan base. Heave away, Le Force, heave away.