00:00 / 16:39
Spotify Stitcher
RSS Feed
Share
Link
Embed
It was Sundance 2012 in Park City, and I was running like a chicken with its head cut off trying to get A-listers and Very Important People to their parties and premieres. I was beginning to lose faith in humans as a whole, and was dangling on a fine thread of losing it when I met Jon Batiste. 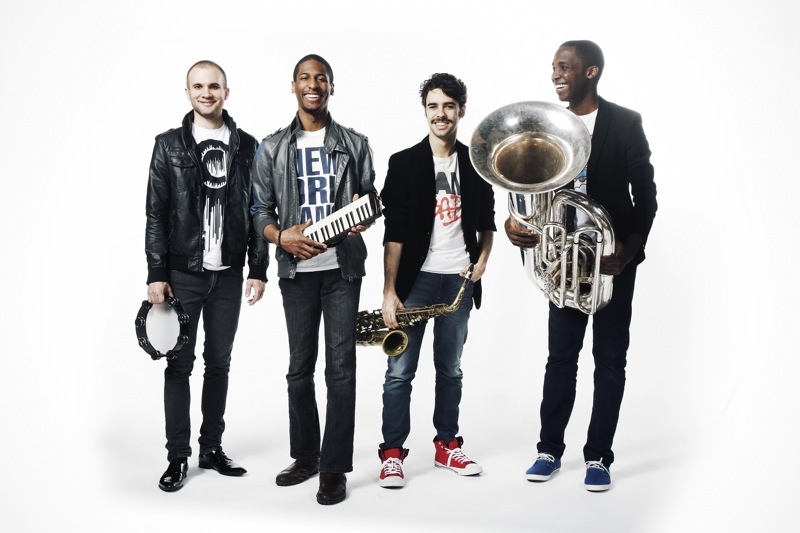 Genuine Human Interaction is a mantra for the Stay Human Band.

It was Sundance 2012 in Park City, and I was running like a chicken with its head cut off trying to get A-listers and Very Important People to their parties and premieres. I was beginning to lose faith in humans as a whole, and was dangling on a fine thread of losing it when I met Jon Batiste. After we started talking about the mystical properties of water, I was unexpectedly slapped in the face with a fistful of love and gratitude. My faith in people was restored, and I was thrilled to have a soulful connection come out of what I thought might break me.

Genuine Human Interaction is a mantra for the Stay Human Band. Shortly after meeting Batiste, I was instantly enamored with his work. It was while I was watching YouTube videos of the band on the New York City subway that made me wish he would come to Utah to do that on our local TRAX rails, as they play impromptu covers and jazz tunes loading a tuba, percussion, saxophone and Batiste’s melodica on the subway with them.

While I don’t believe the crew has pulled a public transport stint here in Salt Lake, I was happy to see they started a “Love Riot” on the slopes at Park City Mountain Resort. This quartet won’t let any setting stop them from playing social music, and even though all of the members of the Stay Human Band are Julliard educated, their music is so delightful and accessible that it allows everyone in their midst to really loosen up.

Lucky for me, I got to see him perform at my old high school stomping grounds, as he played at the Eccles Center in Park City on Saturday night. With a mixture of hits from their new album, Social Music, and a lot of excellent covers, the band exuded an awesome energy on the crowd and established it within the first 30 seconds of playing. Not only does the band give it their all for the audience, the mates exchanged a playful level of camaraderie that allowed all of them to shine during a solo throughout the night, showing how the contributions from each member are an essential part of the overall makeup of the Stay Human Band, rather than it being solely about its founder, Batiste.

The first solo on the saxophone by Eddie Barbash came out of the chaotic noise meld during “St James Infirmary,” and pretty much melted my mind with the luscious brass seducing the audience. Ibanda Ruhumbika has officially made the tuba legit, with the breath management of a master to deliver dignified rhythm to the band while belting the deeper notes. During the drum solo with Joe Saylor, I was taken aback by how youthful his approach was to percussion: while the beating was meticulous, it felt like he was a toddler throwing a tantrum focused on that one drum. After our mouths were stuck agape to his solo, Batiste got out and told the audience that he’s been at it since three, and started with a crazy stint to let out frustration. I might be wrong, but I can imagine these four attending Julliard together and feeling bored with the rigidness of music study, and collaboratively deciding to make things fun and lively with a new approach to soulful jazz.

The band doesn’t stop with the stage, either. Even with limited moving space between the audience at a venue like the Eccles Center, Batiste and crew did everything they could to meander through the space, involving everyone in the music. Batiste invited everyone to participate in the Love Riot that was created there by standing up, singing along, clapping, or whatever you wanted, so long as we didn’t hurt anyone. The audience never escapes the mind of the performers, the best example happening while Batiste played a solo cover of “Blackbird” on the piano, when someone’s phone obnoxiously went off. I could see the awkward shift and subtle shaking of the heads between a few people in the audience, and rather than ignore it and continue with the song, Batiste totally played on it, adding a little piano-ringtone-sound to the tune, incorporating it flawlessly into the melody. It was almost as if the interruption was planned for, and was an instance where it dawned on me that we can choose the way we react to things, and we can often create humor out of a disrupting situation.

These cats truly know how to unwind, and the passion in their music was as contagious as the office flu. Fortunate are the people that see the Stay Human Band live, as I’m sure everyone left the performance with a little more skip to their hop. Here’s to hoping they keep the flame going, and visit Utah again soon! Here’s a video to hold you over until then: