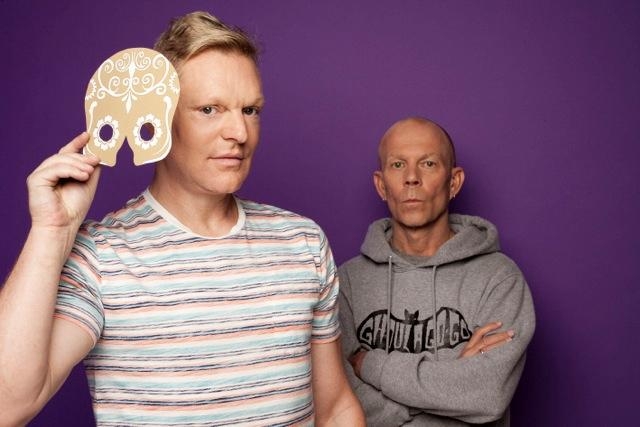 Analogical Resurrection: An Interview with Erasure

When Erasure set out to promote 2003’s Other People’s Songs album, they hadn’t toured in four years; neither Vince Clark nor Andy Bell were sure if the fans would still be there. Perhaps they considered wearing the “irrelevant” tag the British press had so kindly tried to pin, with a nail gun, to their chest.

[Erasure]Spring 2005, caught amidst a 10-night residency at NYC’s Irving Plaza, Vince, Erasure’s keyboard wizard extraordinaire, recounts the experience and the pleasure of finding that the masses still cared: “Our fans are the most important to us and we’ve never taken them for granted.”

I’ve spent the past hour listening to Nightbird, Erasure’s wonderful new album, mulling over questions, trying to anticipate tangents and all the while marveling at the stretch of time and bulk of albums that have come to pass since Erasure played Salt Lake.

“You’ve had a long time to wait,” Vince says.

He isn’t kidding. I remember Holly Braithwaite had the audacity to wear her Wild! T-shirt to English class the following day. I was envious then; I’m envious now. Who would have thought, 15 years later, I would still be waiting for my first Erasure concert?

Now in their twentieth year, Vince attributes Erasure’s longevity partly to the fan’s enduring support, which he believes came from their decision to tour almost immediately and continually. He happily reports there are people in the crowds he recognizes from the earliest shows.

More important is the relationship he and vocalist Andy Bell have developed over the years; a writing process based on trust, understanding and absolutely no ego. Collaboration being the key and missing element in his previous jaunts in Depeche Mode or Yaz, where he was forced to do the majority of the writing on his own. He stresses, despite what some might believe, that Erasure songs are written by the two of them, generally with a piano, guitar and a tape recorder, before being fleshed out with the bubbling synths that trademark Vince’s work.

Nightbird, however, was somewhat of a variation on the theme now that Andy splits time between Spain and the UK, while Vince had moved to America and settled down in the Northeast.

In early 2004, Andy visited Vince in New York for six weeks and they worked out the basic arrangements on an acoustic guitar. There weren’t any preconceived ideas about how the album should sound; there never are. Vince confesses that they’ve never set out to be revolutionary, just to make each album different and at the end of the day, satisfy themselves. His only real concern is that the melodies are strong and the chords are interesting; always looking for that sense of dramatic irony, of tension, in pop songs.

Andy returned to Europe and the album was layered together via e-mail between Andy, Vince and a programmer in London named John Collyer.

“It is the easiest way of working,” says Vince. “You don’t have to wait at the studio for someone to show up. You can write a bass line at three in the morning and send it off.”

It was also a change in the equipment that Vince used for the album. Having moved to America, he left behind his home studio and his vast collection of analog keyboards; replacing them with his computer and two speakers and a new interest in new synth and recording technology.

“It’s a fresh pallet to work with,” he says.

And that pallet pushed him toward simple electronic sounds rather than simulating real instruments, which has resulted in critics calling Nightbird a “return to form.”

“I can see where they are coming from,” says Vince. “The album was very easy to record; the ideas came and it sort of wrote itself.”

A result he attributes to Andy and him being in positive headspaces. A difficult place to find; perhaps made easier by Andy’s publicly confiding that he has been HIV positive since the late 90s.

“He wanted to set the record straight,” says Vince. “Andy’s fortunate; he can come out and be somewhat protected.”

Andy was never one to shy away from his sexuality, a topic Vince doesn’t seem the least tired discussing, which is surprising, considering he has been addressing it since the very beginning.

“We never had an agenda,” says Vince. “We never talked about it. Andy didn’t set out to do anything; he just didn’t hide who he was.”

Focus shifts to the state of music; technology’s rapid advance. For Vince, it is far simpler than mp3 or piracy: With so much to steal our attention, it’s hard to focus on any one thing for more than a quick fix.

“I’m still passionate about music; which seems less common these days,” says Vince. “There isn’t much you can do about it. You can’t make someone passionate. People are just more interested in buying ‘best of’ records. Now the live shows are the real draw. We sell more tickets than albums.”

What kind of show can we expect this time around?

“The scenery has an enchanted forest theme,” says Vince. “Elvis and Marilyn make appearances and by the end, Andy ends up in his underwear.”

“No, but he does wear some tight-fitting outfits and he looks fantastic.”

And what about the vicious press with their negative adjectives and nail guns?

“They’re starting to be interested again because they’re as old as we are; we’re all in our 40s and mellowing out.”

Well, I think I’ve bothered him enough. Any requests?

Oh, don’t worry; I’ll use big words that I don’t even know the meaning of.

Erasure will play to a sold-out Kingsbury Hall on May 28.