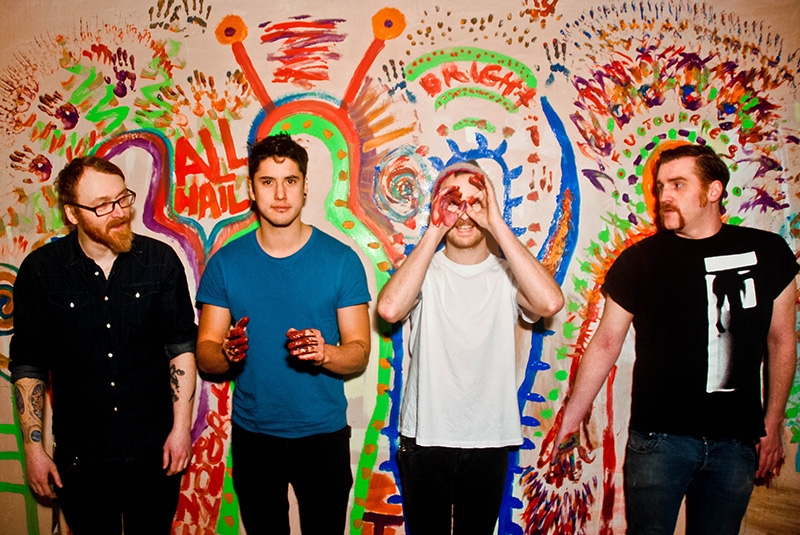 And So I Watch You From Afar: Young Brave Minds

Sometimes you can’t help but be blown away. On Oct. 13, 2010, I meandered into The Basement in Ogden and was greeted by thunderous drumming, huge riffs and four Irish maniacs throwing themselves around the stage with their instruments. I was definitely blown away.  Somewhere in between Slayer and Rush, Shellac and Mogwai, the band had a crushing intensity that was belied by their playful nature and the way their songs transitioned between heavy passages and bouncy breakdowns. If lightning could strike down from rainbows, or cotton candy spontaneously combust into fire, the sounds being created onstage would be the perfect musical accompaniment. I discovered that the band was And So I Watch You From Afar, and I have been a huge fan of theirs ever since. Armed with a new label, a new album and new members, the band will return to Utah on Oct. 15 as part of the Sargent House Tour. SLUG spoke with drummer Christopher Wee in anticipation of the performance.

Since the release of their first album in 2009, the band has been gaining notoriety in Europe, garnering spots on prestigious festivals such as Reading and Leeds, and performing on European TV. With a penchant for naming songs reflective of their sound (“Set Guitars to Kill” and “If It Ain’t Broke… Break It!”), the band’s raucous performances soon brought them to the U.S. on a string of dates supporting Japanese legends Envy.  “We’re well known in the independent touring scene in Europe, but I prefer touring America, to be honest,” Wee says. “People [in America] are more open-minded when it comes to new music. When we did that support tour for Envy, a lot of people came up to us and told us they liked our band, and a lot of people were actually there at the beginning of the show to watch us open, which is something we didn’t see a lot of in the U.K. back in the day—we played to nobody for so many tours.” The band was invited to perform at SXSW in 2011, and it was there that their working relationship with Sargent House (home of Russian Circles, Boris and Chelsea Wolfe, among others) began. The label licensed the group’s second album, Gangs, for its U.S. release, and internationally released their new album, All Hail Bright Futures.
All Hail Bright Futures, released in March 2013, finds the band shifting moods, focusing more on the positivity of their sound and less on their musical ferocity. Caribbean rhythms, futuristic space sounds, wind instruments, Afrobeat and fractured vocals are melded with ASIWYFA’s typical driving sound to create an album that is resilient in its celebratory tone—it sounds like the coolest goddamn beach party you’ve never been to. “The new album is a lot more positive and definitely more reflective of our mood at the time,” Wee says. Guitarist Tony Wright left the band shortly before the album was created, causing a fair amount of stress within the group. “The recording process for the remaining three of us really saved us from that awkward time, and we came to a realization that we were intent on keeping the band going and writing new music. As soon as we got into the studio, it felt like a big freedom to do whatever we wanted that we had never felt before,” Wee says.
Primarily an instrumental band, ASIWYFA have never shied away from incorporating the occasional “Woo!” or other exuberant human noise into songs, but All Hail Bright Futures includes much more vocalization—“Ba Ta Bo Da Ka” features a rhythm of those syllables repeated over and over, and the title of “Ambulance” is joyfully spell-screamed out in something that almost resembles a chorus.  “For the whole lifetime of the band, we started out as the four of us jamming and seeing what would come out, and this instrumental thing just naturally came out. We never shunned the idea of vocals—if the song sounds like it would sound better with vocals, we’ll do it, and that’s always been the case,” Wee says.  With the increase of vocals—which Wee considers instruments in and of themselves—the band also focused on incorporating new instruments into their sound. Piano, flute, steel drums, trumpet and more pop up throughout All Hail Bright Futures, adding new elements to the band’s sound. However, it was not until late in the recording process that the problem of replicating these sounds in the live performance was considered. Fortunately, a solution was easily created. “We shied away from confronting that problem until pretty late on, but I got a drum sampler, and we were able to load in the basic sounds of a lot of the different instruments and made them cymbals, so a lot of the different instruments from the new album are live, triggered samples,” Wee says. From watching videos of the band playing new songs, the transition is seamless.
Headlining the Sargent House Tour with labelmates TTNG and Mylets, And So I Watch You From Afar are sure to blow more new minds in the U.S. this fall. Bring your dancing shoes, a gaggle of friends to convert and something you don’t mind getting incredibly sweaty in to Kilby Court on Oct. 15 and experience the rainbow lightning for yourself!
Photos: