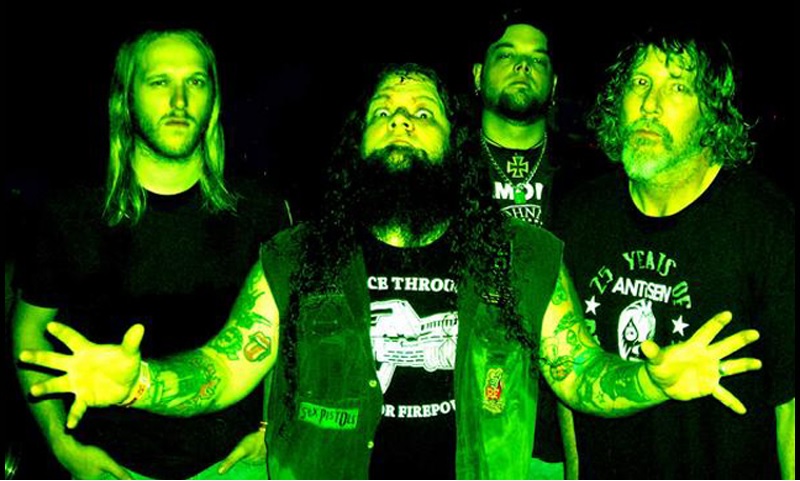 Wait! Wait before you go forming your political views based around your favorite kiddy punk band or Punkvoter.com and its brainless communist Hot Topic army. The least you can do to seem a tad bit intelligent would be to hear the other side of the story from a real punk band that has been around for over 20 years and is active in local government.

[ANTiSEEN] SLUG: I know Antiseen does a lot of touring overseas; does the new album Badwill Ambassadors have any meaning pertaining to that?

Joe: No, it was actually a line someone had used in a review that Clayton saw of us and decided to use it for our new album. Clayton has done that a few times, for example, our old album Noise for the sake of Noise title came about the same way.

SLUG: This interview is going into the “Activist” issue this month.

Joe: What do you mean? Like they are going to try and get everybody in the “underground” to try and swing the election for Kerry?

SLUG: Obviously, that is the motivation.

Joe: Yeah, well they can dream on. First of all, Bruce Springsteen has a big audience but all he is going to do is lose him a bunch of fans. The underground in America is not even a 100,000 voters nation wide.

Joe: Yeah you’re right. Kids like to get into that stuff when they are young, at least give them credit for that. When I was 18 or 20 I got into also, but I got into the Libertarian Party after reading about it in Rolling Stone in 1978, and I have voted that way ever since.

SLUG: I have heard you try and stay active in local government, is that true?

Joe: I have been a LP (Libertarian Party) member for a lot of years. Out of the blue in 2000 the LP called me from Washington out of their Watergate office and asked me if I ever thought about running for office. I told them I had thought about it, it was something I thought I would do when I was much older and not playing in a band anymore, maybe retired. I told them to call my friend who is a LP member and a lawyer that would make a better candidate than me. They said they already contacted him and the situation was not at an opportune time. So I told them to give me the weekend to think about it, and I called them back Monday and said I would do it. I paid the fees and filed to run for state house. So I ran in 2000 and got creamed by a republican. It was something like 82 to 18 percent or something like that. However there was no Democrat on the ballot and I was in the top three LP members in the state. Then in 2001 I ran for city council in my town and almost won, but after multiple recounts I lost by 15 votes to a nine term Democrat. I was all over the newspaper by the time over of the recount and when the people found out about my band, you would have thought Marilyn Manson was running for office. I took a couple years off, but I will be running again next year.

SLUG: Tell me why you have decided to not vote Libertarian in the Presidential Race.

Joe: It started with September 11, I still consider myself a strong Libertarian although I disagree on some military issues. The first thing our government is charged with in the Constitution is to protect its citizens. So when 9/11 happened and the Islamic fundamentalists started flaunting what they had done in our face, that was a serious issue with me. Our government knows where they are at, there is so much stuff that Bush, Powell and Rice cant tell us and we wont know for years. But they know where they are at; they know they are in Iraq, Iran, Syria, Saudi Arabia, Afghanistan, Yemen and Arab Emirates. They where in Hamburg when we were touring over there, they are in America, Islamic fascists are all across the globe. For the left to say they are not in Iraq is just downright stupid, they were in Charlotte, NC. But no, not in Iraq!

SLUG: If this is true, why does the media suppress this?

Joe: Because the liberal media is sympathetic with socialism and many cases communism. They will side with anyone who is against what they believe is an oppressive, imperialistic, capitalist government.

SLUG: One would think Islamic Fascism would be much more oppressive than the liberal agenda.

Joe: You would think, but it is like that the only saying “the enemy of my enemy is my friend”. The left knows why we funded Saddam, they know why we funded Osama, because he helped kill Russians for twenty fucking years, and I applaud them for that.

SLUG: Just like when we supported Stalin in WWII to help fight Nazis.

Joe: Exactly, they know whom they are lying down with to get back at what they believe is the greatest evil that threatens them today, capitalism and conservatism. I see it like Ayn Rand, the dollar bill is the only thing that will save humanity, that is the only thing that does not discriminate. I love money and I love capitalism, as long as it is not in a mason jar buried in your backyard it will do somebody some good somewhere.

SLUG: Who do you predict will win the upcoming election?

SLUG: I thought that punk was supposed to be anti-government, so why is it so many punks hate Bush and Like Kerry, don’t they know Republicans promote less government and Democrats support big government?

Joe: They only see Bush as being an authoritarian figure, especially conservatives; they are the ultimate in authoritarian figures. I mean most are immature and young and are not out on their own paying taxes yet, most live in their parent’s basement. These kids think democrats are “liberals” they don’t understand how much Bush and Kerry are really alike. They see Bush being some big spender, but they have no idea how much Kerry would spend if he got elected. For example when Carter ran in 1976, I was just too young to vote, but I bought his crap hook, line and sinker. He was a southerner, hanging out with the Allman Brothers and Charlie Daniels, said he was going to legalize pot, all that crap man. Once he got elected, all that stuff he said went out the window, it was all a bunch of lip service. Carter was a big, big failure, and I would have voted for him when I was young. Just like all these young kids now.

SLUG: How do you feel about Fat Mike and Punkvoter.com?

Joe: Man, your going to think I am yanking your chain, but I have been in a band for over 20 years and not only have I not been to punkvoter.com, but I don’t know who Fat Mike is or ever even heard Bad Religion or NOFX. I don’t even know Dropkick Murphys and they were once on the same label (TKO) as us. In fact, once Helmet and that band Blink 142 opened for us, and to this date I have never heard any of those bands albums. Its not that I am that detached I just don’t like that type of music. For me it was more of a big deal when The Ramones came to our shows.

SLUG: So you have met The Ramones?

Joe: Yes, several times, we played with them a couple of times. Once, Joey came down to our gig in Wilmington, NC, he came down to see some girl and he showed up in our dressing room after the show. Clayton and my brother once went to buy a book called Stairway to Hell, and when they got to the book store Johnny was pulling at the locked door cussing at the owner to open it. Johnny glanced over a Clayton walking up and said “Hey, your that guy from Antiseen”. Man, that made my brother and Claytons day. The way we learned to play guitar was from Johnny. I took my brother down to see The Ramones in Atlanta in 1979, we got right up in the front row, right in front of Johnny and studied his hands and the way he played power chords. I later tried to adopt that style.

SLUG: Tell me about G.G. Allin.

Joe: Man, G.G. played himself as a racist, sexist and rapist motherfucker. But he was never like that around us. That was his showbiz persona like a professional wrestler. He is just Clayton, people call Clayton racist and sexist all the time, and he is not going to deny it.

SLUG: I have seen some of G.G. Allins videos and he does some fucked up shit.

Joe: I am telling you its all an act, once those cameras where off, and the people he knew all left, he went back to being a normal guy. He liked to drink and smoke a lot, but he was a pretty normal guy. He would come and stay with us for days at a time, just for a vacation.

SLUG: I heard he died in the gutter is that true?

Joe: Nah man that is a rumor also. In fact, before G.G. died he recorded an album in my house and he was on all kinds of uppers. He had been clean for a while but he was going home to see his mom soon and to mellow him out he went and got some junk. So later that night G.G. and some of his buddies in The Murder Junkies got high, G.G. choked on his own vomit and died. His buddies slept till noon and just thought G.G. was sleeping. That is how he really died. Get the new Antiseen CD Badwill Ambassadors sometime after Halloween