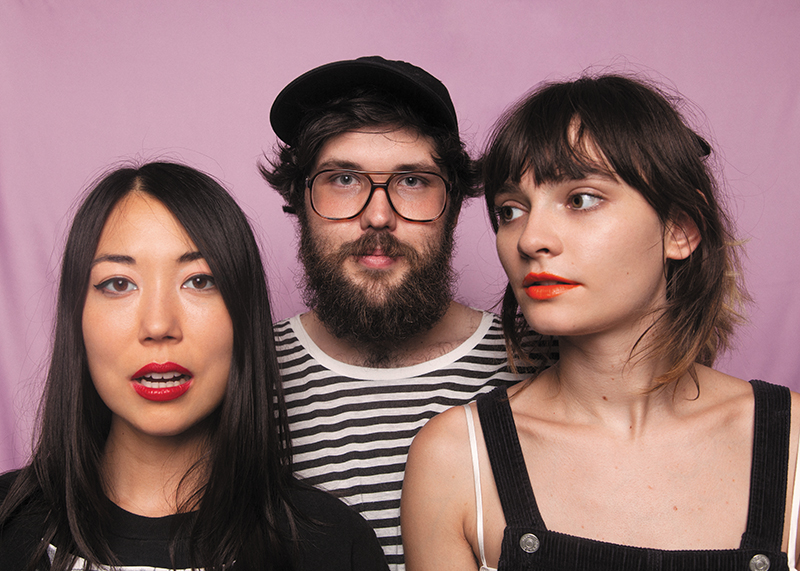 On a scorching mid-October Saturday in the desert of Joshua Tree, California, Cherry Glazerr performed outdoors at a dusty, sun-stricken music festival. Clementine Creevy, Cherry Glazerr’s frontwoman, writhed onstage, expressing her raw presence as a lead singer and guitarist. Her energy seeped through her pores as she bounced confidently on stage howling the lyrics to one of her newest singles, “Told You I’d Be With The Guys.” Though the festival conditions were extreme, the crowd managed to emulate the band’s powerful spirit. A small, energized mosh pit formed in the middle of the crowd as Creevy mooned the audience. Screams of excitement momentarily drowned out the set, but quickly, everyone quieted to hang on to each word Creevy sang. The experience was so moving that I left that set in tears. Creevy along with keyboardist Sasami Ashworth and drummer Tabor Allen, had won over festival-goers. Cherry Glazerr’s performance would be talked about long after that sweat-and-drug-filled weekend ended. Naturally, I was ecstatic to hear about their upcoming show in SLC at Kilby Court on Feb. 4.

Cherry Glazerr got their start when Creevy was just 15 years old. Creevy was recording tracks out of her parents’ house under the pseudonym Clembutt. Her lo-fi garage sound quickly attracted an obscure L.A. following. Soon, Burger Records was calling the young artist to sign her to their label. Creevy says, “I said of course. They were a great Santa Ana–based indie label … It was great to be a part of that team.” Under the guidance of Burger, Cherry Glazerr was conceived. The outfit would swiftly become known as talented high-schoolers who added something refreshing to the indie music world. Haxel Princess, Cherry Glazerr’s debut LP, was released in 2014. After the underground success of their debut album, the band will be releasing their long awaited-second release, Apocalipstick, on Jan. 20 through Secretly Canadian. Apocalipstick‘s recording process was completely unique for the group. They recorded it in just 10 days at Sunset Sound. “The recording process is always changing for bands,” Creevy says. “For Apocalipstick, we had producers on the record. It was great and collaborative—they brought a lot of cool things to the table.” What made Haxel Princess such an underground success was in part how organic it was. There was little production and a lot of passion. The songs on Apocalipstick were written at the same time Creevy wrote Haxel Princess, but instead of creating the new record all DIY, there was a team working with them. “It was just great being in Sunset Sound and getting such great hi-fi recordings out of the whole thing,” says Creevy. “Tabor likes to say it’s like a snapshot of a band’s trajectory and career. There’s so much before and after the record-making process that isn’t really reflected in the record. It’s kind of like a snapshot of what we do everyday.”

Apocalipstick plays like a modern rendition of The Runaways’ self-titled album from 1976. Creevy, unapologetically politically charged, has an air of punk rock feminism on some of the tracks. On her first single off Apocalipstick, “Told You I’d Be With The Guys,” she sings, “Now I see the beauty / It’s necessary to give a lady love.” It becomes clear to her that women need to be treated equally. “My politics are part of my mind set, therefore, it’ll probably come through in my writing, but it’s not like I try to purposefully do that,” she says. “It’s either going to come through or it’s not. I’m not purposefully trying to be political. It’s just that I am.” Creevy mentions that a majority of the songs are sort of whatever was going through her 17-year-old brain. The content juggles anywhere between fast food and her own interpersonal turmoil. While juggling Big Macs and womanhood, Cherry Glazerr also mix in ’80s-esque synth parts, simple grunge guitar and angelically high vocals that the intensity of the songs muddy.

After touring with Best Coast and Wavves in the beginning of 2016, Cherry Glazerr are planning a two-month-long, national-headlining tour. This is the first time Cherry Glazerr will ever be playing in Salt Lake City. Creevy says, “I don’t know what to expect [at Kilby Court]. I’m not expecting anything. I’m sure it’ll be a fun time … We’re kind of a walking party—no matter where we go it’s fun.”

Creevy confesses that the band are “road dawgs” and that they love touring. She goes on to say, “It’s great practice, and it’s a great challenge, and just traveling and honestly playing music every night is kind of like the best fucking thing any musician could ever hope for. It just feels like a blessing and we feel really lucky everyday.”

Not only are Cherry Glazerr incredibly talented for their age—or really any age—they are feverishly humble and gracious. Their voices gain in pitch with enthusiasm just talking about getting to do what they love everyday. There isn’t a moment of it they take for granted. Creevy is an inspiration for all women. She is powerful, confident and absolutely fucking slays her live performances. Salt Lake City, let’s give Cherry Glazerr a warm welcome and show up for their show at Kilby on Feb. 4, and get yourself a copy of Apocalipstick out Jan. 20 or at the show.