“Uncomfortable” is probably one of the best words to describe the early Ariel Pink albums, as well as the majority of interviews and a great deal of the performances. His eccentricities and diamond-in-the-rough garage pop drew people in initially, built him a fanbase of loyal, lo-fi cassette hounds, and did wonders for the beginning of the new chillwave genre. Released in August on 4AD, APHG’s newest album, Mature Themes, is a return to weird.

Ariel Pink’s Haunted Graffiti: Making a Career Out of Strange 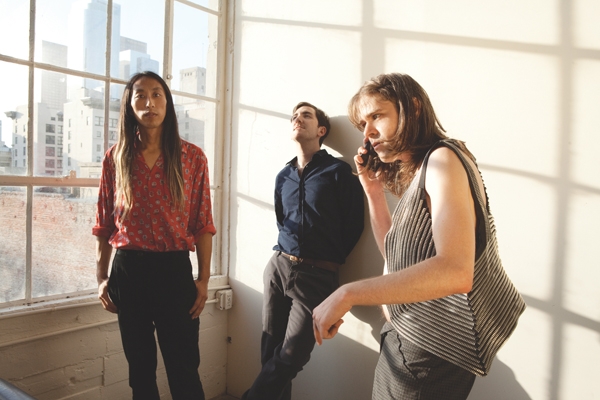 “Uncomfortable” is probably one of the best words to describe the early Ariel Pink albums, as well as the majority of interviews and a great deal of the performances. His eccentricities and diamond-in-the-rough garage pop drew people in initially, built him a fanbase of loyal, lo-fi cassette hounds, and did wonders for the beginning of the new chillwave genre. Released in August on 4AD, APHG’s newest album, Mature Themes, is a return to weird.

My first introduction to Ariel Pink (and probably for many others as well) was the video for “For Kate I Wait,” a song off his sophomore release, The Doldrums, in which Pink dons a sequin dress and danced around awkwardly like a fusion of Buffalo Bill (Silence of the Lambs) and Tonetta (Google him). It is the perfect initiation to Ariel Pink’s Haunted Graffiti, because, from that point forth, you know exactly what kind of guy you are dealing with. The Doldrums was an important record for Pink—its rerelease on Animal Collective’s label, Paw Tracks, introduced him to a much larger audience and garnered the music a great deal of attention.

In 2008, after growing tired of touring with an ever-changing lineup and dealing with an inconsistent live show, Ariel formed a more permanent band. The lineup has since changed, but still includes bassist Tim Koh, and keyboardist Kenny Gilmore. The release of Mature Themes brings another lineup change, with former drummer Aaron Sperske no longer involved, but the change isn’t without its issues, as Sperske has filed a lawsuit seeking $1 million. According to Entertainment Law Digest (where you can find the text of the lawsuit in its entirety), Sperske claims to have entered an oral agreement with Pink concerning monetary compensation. He also claims that he and the other band members wrote Mature Themes together, after which he was removed from the band despite performing “diligently.” “We all contribute little parts, but Ariel usually has a pretty specific idea for a song … For the most part, he has ideas and he tells us what to play,” says Gilmore in regard to the songwriting process.

Two years ago, Ariel Pink’s Haunted Graffiti released Before Today, Pink’s first professionally recorded album as well as the first release featuring a full band. The album was quite successful, as it retained the nostalgic feel (for an unknown era), pop hooks and a great deal of that charming eccentricity, all while eliminating the awkwardness. It was well received by critics and has changed Pink’s core audience from the dedicated lo-fi legion it once was into an army of Pitchfork readers and festivalgoers. “It’s a newer audience that only knows the newer songs. When we play older songs, they just sort of stand there and don’t know what is going on. More people who are just into the singles—it’s a bit more removed,” says Gilmore.

Despite the new fanbase and more listenable tunes, Pink has maintained his eccentricities through live performances and interviews (which range from intriguing to hard-to-watch). An infamous performance at last year’s Coachella Festival had Pink facing away from the crowd and refusing to sing any of his songs before storming offstage.  “Frustration … might as well just keep going or ‘uh … Aww man, not again,’” Gilmore says about what goes through his mind during such shows. The event was likely disappointing for the newer fans looking to hear their favorite new songs, but expected and possibly entertaining for the older fans more familiar with Pink’s unpredictable personality. That disastrous Coachella performance paired with a recent interview on Pitchfork.tv, in which Pink made statements likening homosexuality to necrophilia and pedophilia, are recent examples of Pink’s eccentricities and seemingly odd relationship with his growing fanbase.

Mature Themes is the perfect middle ground between the polished sounds of Before Today and the armpit-made percussion of earlier works. “It could confuse people more—it’s hard to say. I think it might take a second for people to get into,” says Gilmore.  The album adds humor and silliness that were absent in Before Today. It is comprised entirely of newly written songs, as opposed to Before Today, in which the majority of the content was reworked, older material. Despite the strangeness, it has already received positive reviews, and the fanbase isn’t likely to shrink despite Pink’s best efforts.

Ariel Pink’s Haunted Graffiti will be playing Urban Lounge on Sept. 25. This is their first tour with an actual crew, which means higher production values and a more consistent show. Come check them out and watch Ariel Pink command the stage like a drugged-out lounge singer in drag—and try to listen to some of the older records beforehand!