Atlas Genius is the latest indie rock radio darling hailing from Adelaide, Australia. Their freshman release, When It Was Now (2013), has seen healthy airplay by virtue of two solid pop singles, “Trojans” and “If So.” I interviewed founding member and front man Keith Jeffery about the state of affairs in Atlas Genius. 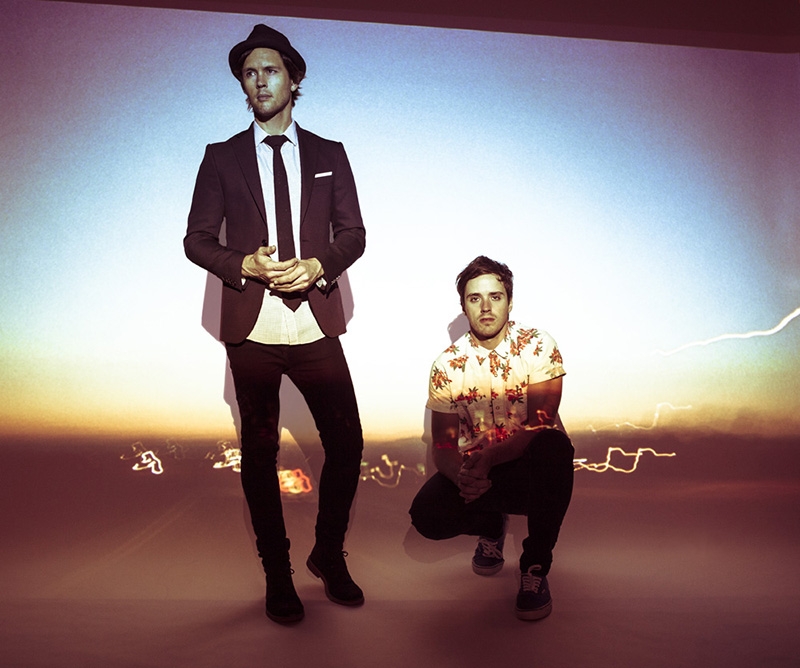 Atlas Genius is the latest indie rock radio darling hailing from Adelaide, Australia. Their freshman release, When It Was Now (2013), has seen healthy airplay by virtue of two solid pop singles, “Trojans” and “If So.” I interviewed founding member and front man Keith Jeffery about the state of affairs in Atlas Genius.

SLUG: How’s the tour going?
Keith Jeffery: We are in in Houston TX, at the moment. This is the second time we’ve done a headline tour. We toured for the first year doing support for Imagine Dragons. We’re actually going out with Imagine Dragons again in England next month. That whole support thing was great. It’s also really nice to do your own shows. We get to play all the songs, there’s no restrictions on the set list.

SLUG: What are the venues looking like on this tour?
Jeffery: The smallest rooms are like 800 (seats) to … some of the bigger rooms are around 2000. We got to play the legendary Fillmore and it sold out. That’s a nice feeling for a band.

SLUG: What do you attribute the success to?
Jeffery: American radio has reacted well. We’re getting lots of love from radio around the country. That Imagine Dragons tour was really great for us because it’s a similar kind of demographic, the same people that like their music seem to react to ours as well. The show we did with Imagine Dragons was the first time we played SLC, and it was one of the last cities for us to get to. We played this huge, cavernous room [The Complex], three or four thousand people. And then we went to the smallest show we’ve ever played in America the second time we came back, we went to Kilby Court, which holds about two people. Our studio is bigger than that, you know?

SLUG: What did that feel like to go from the Imagine Dragons show to the Kilby Court show?
Jeffery: Smaller shows are a lot of fun … You are up in each other’s face. The crowd is up in your face and vice versa. I like the intimate thing. It’s a whole different beast than playing a big show. In some ways it’s almost more daunting to play small shows because you can see everyone’s face. When you play to 4,000 people, there’s almost a faceless nature that happens with the crowd. They’re both good for different reasons. I think we’ve got a bit of a big room this next time in Salt Lake City.

SLUG: The record is full of great pop songs. What’s the single selection process and who’s in charge of it?
Jeffery: The first single was “Trojans”—we never thought of it as a single, it was just the first song we put out. We were wholly independent at that point. We were the record label, we were the A&R, we were the producers. After that we signed, and then you have a bigger team, so everyone kind of weighs in. “If So” was one of the more immediate songs from the album, so it’s a bit of a no brainer. It’s a process where the label weighs in, we all talk about what we want to do, and that’s how it goes.

SLUG: Do you ever disagree with the single selection process?
Jeffery: Not so far. “If So” is still the main single. We are working out the next single. There hasn’t been any conflict.

SLUG: You have an interesting origin story …
Jeffery: We were all in college. I was studying architecture. Music has always been our main passion, but it wasn’t a viable career path—there are a trillion bands out there. There’s so much noise, it’s hard to get noticed. We thought, “We can’t just keep beating our head against the wall, thinking the music is going to turn into something—let’s just be realistic and have a safe career.” We put the song out during that period with very little expectation that anyone would ever hear the song. We paid $20 or $30—there are companies that if you send the mp3 and $30, they put it up on iTunes, Spotify, Soundcloud, etc., so you don’t have to go through all that mess. We paid that $20, whatever it was, didn’t really tell anyone about the song, and kind of forgot that it was out there. We showed a few of our friends and some of the friends’ reactions were positive, some were like, “It’s not really my scene.” We had no expectations of the song doing anything.

SLUG: At what point did it become obvious that you had something substantial on your hands?
Jeffery: The fortunate thing for us was that the first blog that wrote about it was Neon Gold from NYC. It’s been voted one of the top 10 influential music blogs in America. They blogged about it, and because it is such a widely read blog, we started getting approached. Emails were coming in daily from record companies, lawyers and managers around the world. In the end it was 30 record companies that had approached us as a result of that song. It was a pretty crazy time.

SLUG: At what point did you decide to put college on hold?
Jeffery: As soon as that exam period was finished.

SLUG: What bands are you excited about these days?
Jeffery: The new Cage The Elephant album. I saw them play the other day in New York. We played with them a few days before that at a festival. They are an incredible band live. Little Comets, who we are actually touring with at the moment, an English band, and also Tycho. Those are three bands that are really doing it for me at the moment.

SLUG: What is the future of Atlas Genius?
Jeffery: We are thinking about getting this second album out. Looking forward to having some time at the beginning of next year to get into the studio… we’ve had a lot of influences. We’ve toured with a bunch of huge American bands… we are always influenced by recordings. When you get to tour with bands and get to see what they are doing live, it’s really interesting to see those songs night after night and see how that works with the crowd, that whole dynamic. Certain songs are great on the record but not live. That certainly influences the next record.

SLUG: Are there things you would do differently this time in the writing process?
Jeffery: What we did with that first album: everything was very concise … we trimmed all the fat away. These are concise pop songs. Pop can be a dirty word, but it’s indie pop, I guess. I feel like we will let our hair down a bit with the next album and extend certain sections. Most of the songs we play live now, there’s some part that we extend, that we can travel in the song a bit. I’d like to do a bit of that in the recording of this next album. A lot of that only exists live—I’d like to record some of that.

SLUG: Any closing words for the SLC fans?
Jeffery: We are excited to see you Salt Lakians! It’s been a few months.

Atlas Genius will be performing at In The Venue on October 30 at 7 p.m. Tickets are available at Smith’s Tix, $16 advance/$18 day of show. Here is their video for "Trojans":