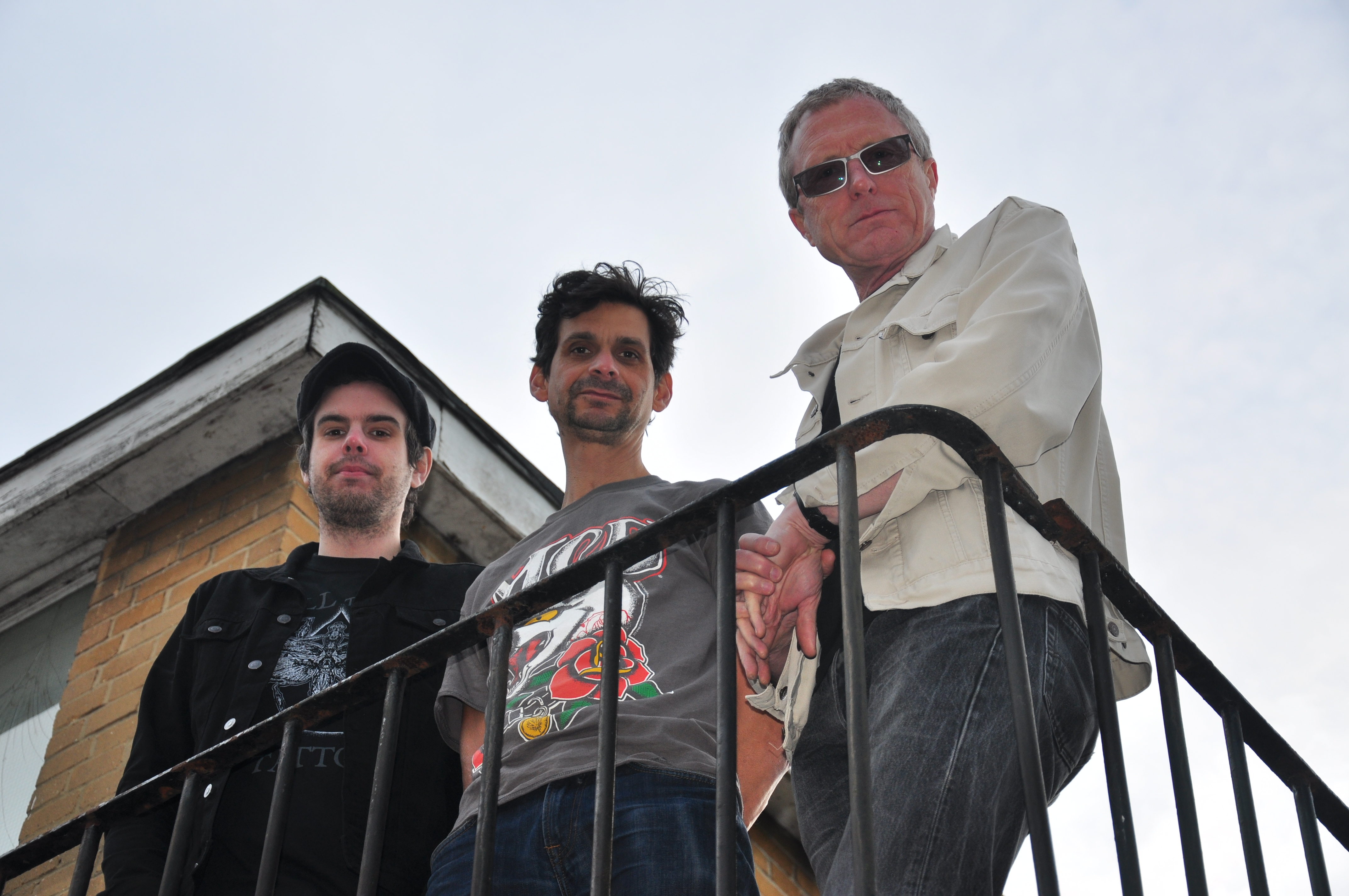 The Audacity of Radical Themes: Steve Drewett of Newtown Neurotics

Emerging during the second wave of the British punk revolution in 1979, The Newtown Neurotics were formed by frontman and guitarist Steve Drewett and boast songs that have openly radical themes commenting on equality, oil depletion, misogyny and unemployment, long before such rhetoric had made its way into mainstream discussion. Almost 40 years later, Newtown Neurotics are still going strong and spreading their radical message to tear down the dullness of unquestioning compliancy and, hopefully, to inspire listeners to act against capitalist oppression. With their high energy and easily infectious subversive protest anthems (like “Lets Kick Out The Tories,” “When The Oil Runs Out” and “Living With Unemployment”), they will no doubt do just that. After reforming in 2006, they have been frequent guests at the Rebellion Festival in Blackpool, England, since 2009. Newtown Neurotics will play the festival again in August of this year—making three appearances, including an interview session with Drewett. If one were to catch them live or even on a recording—like those found on Beggars Can Be Choosers (1982)—one will surely be inspired by their unparalleled energy and devotion to knocking out a solid and intimate performance of politically charged punk rock. It is a sound that is totally magnificent in its ability to make one jump up and down with a fury of excitement—but then again, with a band with such an impressive catalogue, one couldn’t expect anything less from Drewett and Newtown Neurotics.

Prior to forming the The Newtown Neurotics in 1979, Drewett had felt adrift and disillusioned with the state of pop music. “I wanted to make music—I wanted to play in a band, but I couldn’t stand any of the music I was hearing anymore,” says Drewett. “Because by that time, the sort of fizz and buzz of glam rock—which was the last sort of interesting subculture that had happened in Britain—was turning into prog rock and becoming bloated and uninteresting.” Almost losing interest in music all together, Drewett continued to drift, until he eventually found himself drawn to the sounds of reggae. “I started getting into reggae because it was fresh and different,” says Drewett. “It was a different rhythm and different sensibility … It wasn’t full of bloated rock stars—and just as I found myself getting into reggae, punk happened.” Reggae and punk offered sounds that were exciting. In the late 1970s, punk still represented a threat to mainstream culture that manifested in young people who actively questioned what most others took for granted. “I felt threatened by it, personally, because I hadn’t achieved anything in my late teenage years up until 23, 24. I wasted it,” says Drewett. “I sort of felt that I may have actually missed this great moment in time, because punk was being [a] young person’s movement. In fact, what I didn’t know was Johnny Rotten and Joe Strummer were ’round about my age at the time. I perceived them to be a lot younger than me.”

The accessibility of punk also inspired Drewett to focus on his guitar playing. “[Punk], conveniently, was very interconnected with reggae at the time—which fit in with me perfectly—and also ticked a lot of boxes of the radical in me,” says Drewett. “… Radical had gone out of pop music at that point in time. It was being reintroduced via the punk ethic, and its ability to shock and push people out of their comfort zone, and enable them to reevaluate the world around them … that’s exactly what it did for me. It pushed me out of my lost time, my lost period and gave me a focus to direct myself.” Taking punk’s critical influence to heart, Drewett adapted and felt revitalized.

Although The Newtown Neurotics were not part of the first wave of punk, they performed songs that celebrated radical notions, much like The Clash or The Adverts did before them. The Newtown Neurotics’ impressive catalogue sought to subversively poke cracks in the façade of an oppressive, Tory-led capitalist system and subsequently invoke curious minds to question the world. For example, The Newtown Neurotics’ reworked version of “Blitzkrieg Bop” used a the well-known pop tune with new but catchy, politically incendiary lyrics to bring attention to the ominous threat of the Cold War’s arms race. Other songs, like “Living With Unemployment,” commented on the politically charged struggles of 1980s Great Britain. “Living With Unemployment” spoke of a time in the 1980s where one struggled to get decent work or had to live off of benefits until one could get a job. Fast-forward to the 2000s—one could be considered lucky if one had a decent job at all. Today, the fantastically insurgent tone of these kind of songs still find meaning for a new audience, even if the terminology is slightly different. “‘Living with Unemployment’—it doesn’t actually fit the model as it is now, but the sentiment in it does,” says Drewett. “Unemployment is not always the problem here in England … It is underemployment or being paid very poorly. A lot of people are being forced into scraping a living together by holding more than one job down.” This way, living prevents people from looking for a decent job, as it forces one to focus on staying employed at what might be considered a substandard job. Drewett says, “The song has that feeling, you know—it has a certain feeling in it … it is a language in itself. It speaks to people about actually using words. That’s the way I believe it. That’s why, whenever I play it anywhere in the world, people just go mad for it.”

Another song, the high-energy but angst-filled and desperate “When The Oil Runs Out”—which was inspired by the Sydney Pollack film Three Days of The Condor—criticizes Western civilization’s unthinking reliance and overzealous, capitalist-based consumption of fossil fuels in everyday life. “‘When the Oil Runs Out’ is a metaphor … for depletion of energy—it doesn’t have to be oil,” says Drewett. “When it was originally written, it was meant to point out our reliance on this thing, and of course, oil is the cause of so much trouble in the world …” Drewett believes that, to address the problems cited by the song, a whole new way of thinking and manufacturing is needed. It’s a philosophy that would require moving past the consume-or-die model of capitalist economics. “There comes a point when it’s going to become unsustainable,” says Drewett. “It isn’t just the matter of green technologies, it isn’t just the matter of choosing the right fuel, or turning lights off, or any of that thing. I think we have to look at how we work economically …” Drewett suggests that even now, capitalism is struggling to justify itself, and he believes that we as a civilization need to think with a broader imagination to avoid total ecological collapse. While Newtown Neurotics don’t necessarily offer outright solutions to these problems, their riotous protest anthems serve to inflame agitation and dissent against all forms of apathy. Arguably, this is the kind of music that is needed more and more in today’s uncertain world, and luckily for us, Newtown Neurotics are still here and never fail to deliver.

This year, Newtown Neurotics return to the Rebellion Festival. This festival draws large and diverse subculture-minded people from all over the world, and it hosts a lineup that sees many bands from the first and second waves—among newer groups. Drewett admits he personally doesn’t know of many contemporary punk bands that actively carry the radical anthems posed by earlier generations, though he stresses that that doesn’t mean that they are not there, mentioning Bleech and The Tuts as possible contenders. This is a good thing, since Britain voted to leave the E.U.—aka Brexit. Since this referendum, there has been a sharp rise in right-wing actions across England. Historically, there have been many campaigns organized by the left—like the Rock Against Racism concerts—to utilize music as a way to educate, agitate and inspire organization in response to right-wing mobilization. “I think the tradition of carrying a radical message with music that has existed in England over the years will be there again … Music is a message—music is something that should bring people together, not divide them,” says Drewett. “That’s why right-wing groups have never really taken off, ’cause music is about bringing people together. That’s what it’s for. It’s a very human thing. It doesn’t really lend itself to the worst, base elements of human nature.”

For more on the Newtown Neurotics, check them out at the Rebellion Festival in Blackpool, England, August 4–8. Watch watch for the vinyl release of Pissed As A Newt—originally released as a cassette—in the beginning of 2017, as well as a possible East Coast tour later in 2016. For more updates, check out steve-drewett.com/neurotics.