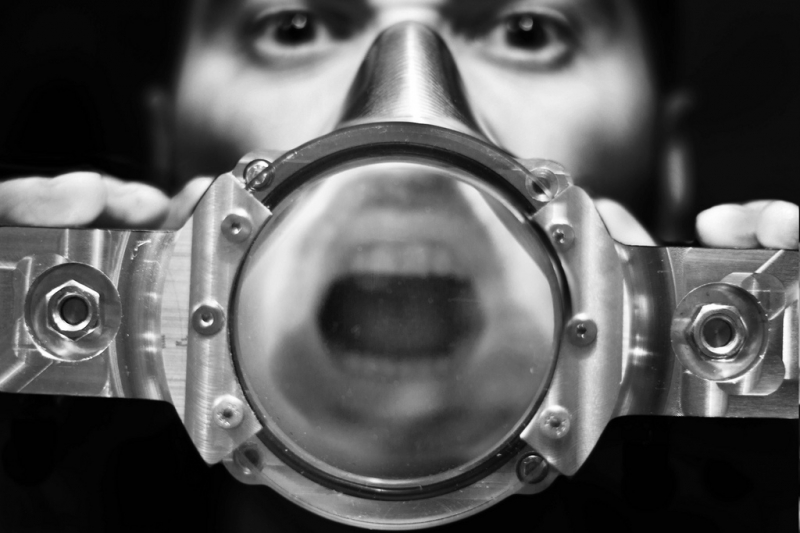 The year 2015 has been very busy for Author & Punisher. Its creator Tristan Shone has already toured Europe twice this year, with one tour in support of the ’90s band Atari Teenage Riot.
When he was a teen, metal bands like Melvins and Sepultura triggered something in him. He was aggressive and he liked that style. Some other bands that have influenced him are Godflesh, Neurosis, Aphex Twin and Ed Rush & Optical. He also mentions that he loves “Noise” music. With his evolving taste in metal music and growing education, it was a natural progression for him to move on to the guitar and then on to sculpture and electronics.
Shone tried the band arrangement but the complexities of dealing with other peoples scheduling, kids, and drugs lead him to become frustrated so with time he believed he would be more efficient working on his own. In 2004 the solo project Author & Punisher was born. In the early stages he was doing live gigs with a drum machine and a guitar. Shone’s passion for music and knowledge took him on a journey that has created today’s refined sound.
In the late ’90 s he attended the Rensselaer Polytechnic Institute in Troy, New York, where he studied mechanical engineering. Although he thought some of the design projects were stimulating, most were designing car parts or exercise equipment, which did not stimulate his personal creativity. Luckily, a professor named Chris Csikszentmihalyi took notice of Shone’s expertise, and they designed technical art installations together.
After that, he worked in the engineering industry for four years and realized that he needed to do something different. He discovered things were a little too mundane for him, as the job was filled with busy days and long nights. It was not until he moved to San Diego and went to grad school for Art that his current style and the machines that he uses today were developed.
While in art school, he became really interested in kinetic robotic sculpture. He now favors the sculptures of Arthur Ganson, who makes small art robotic sculpture, and Matt Hope, who was a good friend he worked with in grad school. Hope is now an up-and-coming artist that makes sound and high-tech based art. Shone is also influenced by film, which provokes some of the anxiety and lyrical/conceptual content behind his shows and music. He calls himself a Lars von Trier guy, but he also likes Takeshi Kitano and Japanese Yakuza gangster flicks—although these are all very violent in nature, he considers himself to be a big softy at heart.
Shone makes his living now not only as an artist, but also as mechanical engineer in one of the largest microscopy and imaging labs in the country. He does design work on new components for electron microscopes and development work on imaging technologies. When he comes up for an idea for one of his “drone” or “dub machines,” he creates them by using the machinery he works with. Most electro-mechanical devices and electron microscopes have heavy pieces, which require different interfaces for humans to move them ergonomically. He adapts some of the sliding and turning elements of these machines and incorporates them into his designs. He first uses C.A.D. software to create them virtually, then selects the parts to see how it feels with his movement. During the next step he either manufactures it himself or sends it out to be done by a machine shop. Finally, when the product is finished, he will attach his electronics to it.
Author & Punisher sounds are always similar, as he uses music software but the artistic part is how he designs the programs. He creates systems to translate his body motions into something a computer can use to create sound. He uses the “drone machine” wheels and throttles to create slow, droning music, crossing tones and creating pulsing rhythms. His “dub machines” were designed to create high-powered speed and delivery. The sounds of Author & Punisher are not as heavy and not as drawn out. The way your body interacts with it is much quicker than the drone type.
When asked how he felt about “Terrorbird” packing the dance floor, he says, “The music I like as dance music is not the music I make.” He really is not an industrial fan or industrial music figurehead, but is a more of a doom metal guy. He does feel industrial music eventually finds its way into it, though. “The people who make the heavier stuff end up making this kind of bland, leather, vinyl based, dancey, industrial thing.” He says, “It is very washed out and doesn’t have the visceral component or the live component. ‘Terrorbird’ is a song that does not have sequence beats, when I play that song I don’t have a click track in my head. I play it all live.” Shone feels that it is important for industrial music to go in this direction—a direction where artists are not just pressing play for beats but are actually making these beats live. Although some people may describe Author & Punisher as industrial or drone, he does not like to put a title on it and understands people can be turned off by a genre name. Without using those descriptions, he would described his music as live, bass-heavy and rhythmic.
Due to his later start in life, he feels he is lucky to both work as an engineer and be able to tour. He has the comfort of not sleeping on too many floors or in dirty warehouses. He has worked hard to combine both mechanical engineering and music. The years of setup have allowed him to meet the right people and stabilize both careers, giving him the freedom to do what he is passionate about. He credits his success to his parents, who have been pretty supportive throughout his choices and have bailed him out a couple of times.

As for his experience in our city, he says, “I have always had good shows there.” He looks forward to returning to Crucialfest as Author & Punisher and says, “The festival seems to have grown since then which is great. I think it was a really well run festival. I would love to come back, those guys are really nice.” Check out Shone’s new remix album titled “Bong–Ra Vs Gore Tech Vs Author & Punisher.” he’ll be playing live at Area 51 with locals Burst Therapy on Thursday, April 30. The last time he played here, it was a sold-out show, so grab your tickets now.