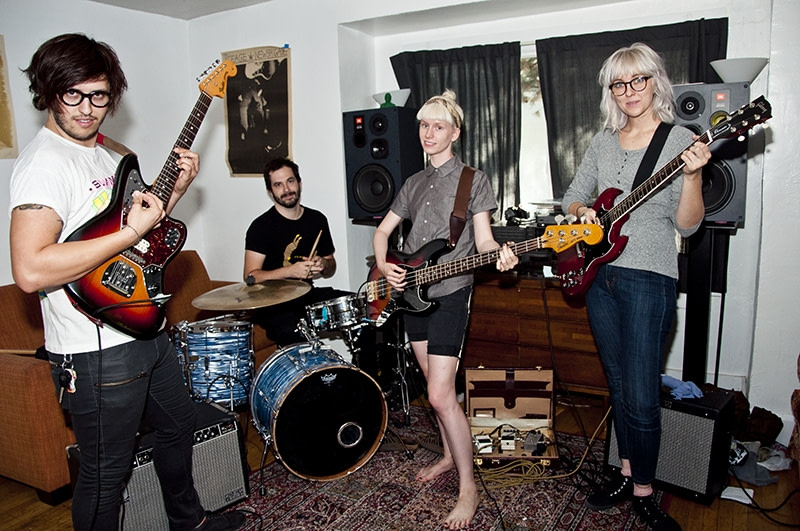 The first time I heard Baby Ghosts, it was through a Bandcamp link someone had forwarded me in early 2012, saying, “You should probably give this a listen.” It was their first album, Let’s Always Hang Out Together, Okay? It cost a whole $4 and barely clocks in at 30 minutes … but the power pop punk that came blaring out of my speakers sold me for life—I felt as if I were transported to the world of Scott Pilgrim, a magical video game/comic book–fused world where music was king and we were having a giant party in their badass kingdom. This was something new and fun—something exciting, unjaded and full of vigor.

When the album broke out, I got to witness the impact it had locally—first dominating the Provo music scene and pushing a new wave of house shows across the city, then making numerous Top 10 lists, as well as seeing venues across northern Utah clamor for a band that, at the time, wasn’t even legal to play anywhere except for all-ages venues and private parties. The group earned part of their success working with DIY labels who would take copies of their albums and sell them at an affordable price, which, in turn, got their music out across the U.S. in relatively short order.Usually, this is the part of the story for Utah bands where they reach critical acclaim and then the band breaks up, but miraculously, the group has stayed together for four years, releasing a 7” in 2013 and, in August, a brand-new full-length album called Maybe Ghosts.

On a balmy Sunday morning, I excitedly bounced my ass out of bed and made my way down to Salt Lake Coffee Break where I was greeted by the primary members of Baby Ghosts: Bret Meisenbach, Katrina Ricks and Karly Zobrist. While I gathered my questions together, the trio joked about their week and local music trends happening in SLC and Provo, showing that they’re all still quite involved and care about what happens around the scene, clearly having fun as friends who happen to be in a band together. So, the first question on my mind was how they felt about being together for over four years.“I think we take it casually enough. We record and tour a lot—we also take long breaks so we don’t get overwhelmed,” says Meisenbach. He expressed that if it stops being fun, they’re not very inclined to do it.

If it starts getting stressful, that’s usually when the group will take a few weeks off where they don’t practice or write, or do anything really but hang out if they really want to. “I feel like if you don’t do that, that’s when people start getting mad at each other, fighting, quitting—so we try to avoid that,” he says.The band is actually coming off what could be considered their biggest break yet, since Zobrist (who currently serves as the head pastry chef of Eva’s Bakery) spent the last year in Las Vegas attending culinary school. While she still served as a contributing member of the band and recorded all her parts on the new album, the process became more drawn out, as she wasn’t around for much of the writing process. Because of this, the recording at Black Pyramid Recording took an entire year to get through.

“I would come up for a weekend, we’d have a show that night, and in the morning, I’d wake up and record something at Bret’s studio, and then drive back home because I’d have to be into work. It was a series of 36-hour trips where they’d be like ‘This is your part—sing it!’ It was difficult to record [the album] and still be a part of [the band],” Zobrist says. Through that chaos came a unique way of putting together an album: Ricks and Meisenback would make demos of songs together while Zobrist would record her own demos and email them. The duo would record in a DIY fashion with drums and bass, adding vocals when they could, waiting for Zobrist to visit to record her parts into the mix throughout. In order for the band to get to the point where they were playing the final versions as a unit on tape, they needed to reach out to their friends for help.“There were times where we would write songs and couldn’t record them, so we would teach them to our friends from other bands, and they would come practice with us,” said Meisenbach. Oftentimes, the members would find singers and guitarists, saying, “Here’s what the guitar part might be” or “Here’s what Karly said,” just to play it so they could hear it loud one time. They ultimately had songs on this album that they didn’t play together until recording was complete.

Those looking to hear the same jovial pop punk from the first album may find themselves caught a little off guard by the lyrics. While the pop punk vibe is still very much in effect, the lyrics and overall tone of the music has taken on a more grounded sound. The band admits that the first album was made to be goofy because people didn’t really know who they were yet beyond shows at the now-defunct Compound in Provo. When people started buying the album and honed in on the lyrics, the group realized that they should stray away from writing such weird lyrics that made no sense. Through that process, the songs became slightly harder and more meaningful, yet still retain the humorous tone with which the band still pokes fun at their own work. Maybe Ghosts ends up packing quite a wallop, as the band took emotional themes and fun experiences and drizzled them with a chocolate coating that still makes even the hardest-hitting song a tune you can dance to.

“I think our songs are more serious this time around because they’re about actual things, but still in a very funny and joking kind of way,” says Ricks. “The song ‘Crash’ is about this one time I got into a really bad car accident. It was a really crazy, weird experience, so that one is pretty literal and serious, but writing the song makes it feel better in some ways.”One of the biggest standout pieces intrinsic to the band’s formula in recording and live performances has been the vocal harmonies, which mainly consisted of Ricks and Zobrist at the start, but has morphed into having all three contribute to taking the lead and switching off to harmonize. They’ve also, much to their pleasure, eliminated the kind of contention most bands end up developing where a single performer is labeled “the star” while the rest are viewed as a backup band. The vocal treatment has given them new avenues to explore when writing songs and performing live, which many bands aren’t able to attempt.

For example, this time around, Ricks and Zorbist switched roles on a few tracks, giving Zobrist a chance to scream out loud while Ricks toned down and stayed in melody, creating a new dynamic to their sound that they hadn’t played before.Ricks says, “I think it really takes the pressure off, like you don’t feel like you’re in charge of entertaining people. It balances everything out. It doesn’t make one person the band. I think, at first, we think, ‘Oh this is a Katrina/Karly/Bret part, but we tend to mix things up, and it kind of depends on the song. I know, when I write pieces, I have specific voices on my mind, like in “alien.edu,” I wanted Karly to sing the vocals.”

At the time of this article, the band is now on their fourth lead guitarist—Chaz Costello, of (JAWWZZ!!, Fossil Arms, Broken Spells, Bears On Parade)—filling what’s been a rotating door of wicked shredders. Since their inception, they’ve jammed with Pat Boyer (Desert Noises) and Mike Dixon (Memory Map), as well as Cade Thalman from Black Pyramid Recording. When asked about that fourth position and the decision to fill it rather than move on as a trio, the group were adamant that it was a necessity rather than an addition.

The group’s system has always been based on partner writing—a system where there needs to be two people writing the songs, which is a core element that has maintained the necessity of always keeping it a four-piece with a lead guitar player. “We like extra guitars because there isn’t just leads and solos or anything revolutionary like that to sound cool. It’s just that we have a lot of harmonized chords, which makes it sound bigger. We don’t see ourselves as a three-piece band with a fourth member. Whoever fills that position adds some style and flair to that set or song, but Pat, Mike and Chaz have all written songs with us, so they feel like members of the band,” says Meisenbach.

While the band has made great strides in both Provo and Salt Lake City, one of their biggest pet peeves is the perception of having two different scenes with different goals so close to each other, rather than one giant scene working toward the same goal. After touring with Columbus, Ohio, band All Dogs earlier this year and being exposed to what Meisenbach calls “the most impressive DIY scene in the country” in Columbus, the group would love to see the two scenes unite and bring more exposure to everything happening in Northern Utah. Meisenbach specifically points to Salt Lake as having a huge subculture, but it’s not big enough to have five DIY scenes, leaving everyone fighting for shows and crowds. He rallies the cry that there needs to be some kind of unification, but that’s really hard to accomplish. This sentiment is shared by people who are already working on unifying the cities, making this an exciting time to be involved with the Utah music scene.

“I look to Columbus, Ohio, and I think of what I’d like this scene to be like. The one thing we need that we don’t have is that there needs to be the one band, like when Parallax was around, that everyone from Provo and SLC wants to go see. We’re too silly to be that band, but we need a band that’s cool and has awesome music and positive lyrics, and it’s about community,” says Meisenbach.

While the band itself may not see themselves in that role, it’s hard to think of another band in the past five years that’s drawn crowds in both cities and created such an impact within the DIY community. The lyrics may be a blend of humor and silliness, the shows may be rowdy and chaotic in presentation, and maybe most fans are going just to dance their asses off to killer tunes. But when you look at their attitude toward their accomplishments, their direction and their success so far … maybe they are the band that can unite both scenes and become the Bill & Ted of Utah music.

You can currently download Maybe Ghosts, as well as the band’s whole catalog, on BabyGhosts.Bandcamp.com