Part Provo and part Salt Lake, the aggro-adorable music of Baby Ghosts exists in a nebulous world where pop-punk, cuddlecore, anime, garage rock and 8-bit video games coalesce into a perfect party soundtrack. The co-ed four piece utilizes three of its members as vocalists—singing, screaming and harmonizing playful yet thoughtful lyrics over bouncy melodies that give way to some certifiably shredding guitar work. The band has a wide appeal, equally embraced by the more indie rock-oriented crowds of Velour as well as the blossoming Provo hardcore scene. 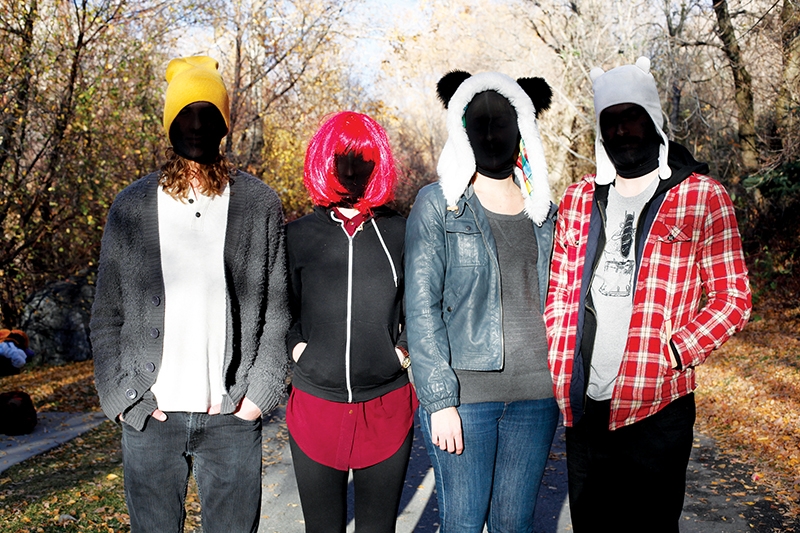 "We like the idea of something thats very cute and childish that can mean something more," says Bret Meisenbach. Photo: Teryn Mendenhall

Part Provo and part Salt Lake, the aggro-adorable music of Baby Ghosts exists in a nebulous world where pop-punk, cuddlecore, anime, garage rock and 8-bit video games coalesce into a perfect party soundtrack. The co-ed four piece utilizes three of its members as vocalists—singing, screaming and harmonizing playful yet thoughtful lyrics over bouncy melodies that give way to some certifiably shredding guitar work. The band has a wide appeal, equally embraced by the more indie rock-oriented crowds of Velour as well as the blossoming Provo hardcore scene. “I’ve been in a lot of different bands. I’m either in really mellow bands or intense punk bands, so this is actually kind of in the middle,” says drummer Bret Meisenbach.

Meisenbach is a veteran of the Provo music scene, serving time in Big Trub and The Mighty Sequoyah among others, as well as being one half of Black Pyramid Recording. He formed Baby Ghosts in late 2010 as a duo with the band’s original vocalist, Laurie, taking influence from The Raveonettes.  “We would both sing, and there was a drum machine and a guitar. Then we decided to turn these songs that had really beautiful melodies into punk songs and play them really hard and really fast,” he says. “I try to write meaningful chord progressions and pretty melodies, but that can be played really fast. I don’t really know if it’s working or not, but that’s what I want to do.” After several lineup changes, the band’s current lineup of bassist/vocalist Katrina Ricks, guitarist/vocalist Karly Zobrist and guitarist Pat Boyer (with “understudy” Mike Dixon filling in while Boyer is on tour with his other band, Desert Noises) solidified in 2011. The band’s youngest member, Zobrist, only had limited musical experience before joining Baby Ghosts: “I was in band in middle school and high school. I played the flute,” she says. The band attempted to incorporate Zobrist’s woodwind experience into their sound, but as Meisenbach says, “It never sounded good.”

A sense of fun radiates from the band’s recorded work and is especially prevalent in their live show. Smiles are often plastered across the members’ faces as they sweat and scream through their sets, and laughter even seems to find its way into some of the more tense moments onstage. “Me playing guitar is Bret’s worst nightmare,” Zobrist says. It may look like Zobrist and Meisenbach are constantly at odds, but they are quick to explain that it’s just part of the band’s dynamic. “We have a weird relationship where I can get really mean when she isn’t doing something right, but nothing bothers her, which makes me get even more mean because she’s not listening,” Meisenbach says. “When I’m yelling at somebody, I’m not actually mad, that’s just how I talk. And when Karly’s laughing at you, she is actually listening, she’s just laughing at you at the same time.”

The band has also remained conscious of the way they portray themselves through the artwork featured on their physical releases. Both of the cassettes they released in 2011 (Baby Tape and Spacebook) as well as last year’s full-length album (Let’s Always Hang Out Together, Okay?) feature cutesy anime artwork contributed by Pittsburgh artist Naomi Martin. It’s an unusual aesthetic choice, and Baby Ghosts have received criticism for it, but Meisenbach believes that it is representative of the motivation behind the band. “They think it’s weird or childish, and one person told us that if we don’t change our art, no one would ever sign us or even take us seriously. But that’s the whole point: We don’t really want to be taken that seriously,” he says.  “We like the idea of something that’s very cute and childish that can mean something more.”

This January, the band will embark on a tour to support a new 7” being released jointly by Lost Cat Records in the U.S. and Drunken Sailor Records in the UK. The opportunity to release the 7” arose when the band sent CD-Rs of three new songs out to about 40 DIY labels throughout the country. “Lost Cat Records from [Minnesota] was the only one who responded. Initially, the owner said he didn’t have money to put the 7” out, but wanted to distribute the album,” says Meisenbach. Two weeks later, however, Lost Cat contacted the band and told them that Drunken Sailor would help foot the bill, giving the band motivation to book a 10-show tour travelling out to Washington D.C., hitting DIY hotbeds such as Columbus, Ohio and Bloomington, Ind. along the way.

Baby Ghosts is a hard band to pin down. There’s influence from a wide variety of music, pop culture and various aspects of nerd-dom, but more than anything else, they’re unabashedly adorable and enjoyable. “We’re not really heavy enough to play with heavy bands, but not quiet enough to play with quiet bands,” Meisenbach says. “We play a lot of mixed genre shows where we’re the odd man out, but it tends to work out.” Visit Baby Ghosts online at lilbabyghosts.com to play the official Baby Ghosts video game and at lilbabyghosts.tumblr.com to keep up with the band and find out which Internet memes make them laugh the most.