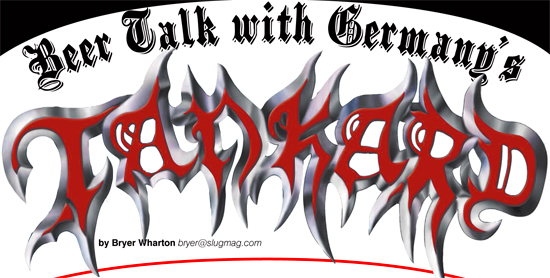 Drinking and listening to metal are two things that go hand in hand.  Going to shows and chugging down brews or just hanging out with your friends, listening to the heaviness and/or silliness while downing cold one after cold one is a big part of living the metal lifestyle. Tankard formed in Germany as teenagers in 1982. They combined their love of beer with their music––hell, the name Tankard is a word for a type of beer stein. In an interview with Tankard’s drummer Olaf Zissel, I found out some interesting tidbits about the band and the great tradition of German beer. Grab a cold one, any of Tankard’s 13 studio albums of punk rock influenced thrash metal and enjoy.

SLUG: What is the beer of choice for Tankard? Do you guys have a specific brand or type that is sort of the pseudo-official beer of the band?

Olaf: There is no official Tankard beer, but we always try to get the local stuff wherever we are. That’s what we call ecobeer. In Germany we have breweries at every corner so nobody has to buy beer that traveled more than 15 miles and that’s a very environmentally friendly way of drinking beer.

SLUG: Alcohol and mainly beer was a theme the band used early on and continued to use throughout your career. Is there a specific reason behind this or do you guys just really like to drink?

Olaf: It’s legal to buy it at the age of 16 in Germany. People’s first experience with alcohol usually starts with beer. In the band’s early days at the age of 14/15 it was a bigger deal to get some (not a serious problem) but nowadays it’s only ‘cause we like it.

SLUG: What is the biggest difference between American beer and German beer?

Olaf: The biggest difference between German and American beer is the fact that in Germany we have a special law for the ingredients of beer from the year 1516 and that means a very long tradition. American stuff is full of chemical flavors and preservatives and that is the reason why it is not competitive to German beer. The process of brewing without chemicals takes about five to seven weeks. The industrial brewing time is between two and four weeks so there must be a difference in the quality. SLUG: In Utah, grocery store beer and the beer you’d buy in a club has an alcohol content of 3.2 percent. If you visited, how many beers do you actually think you’d have to drink to feel a buzz?

Olaf: I don’t think that I’d like to try this kind of beer ‘cause if they mix it with water to get a lower percentage it must taste bad. If they cut the fermentation process before it is finished it must taste bad and if they use dialysis to separate the alcohol it also is not good. So if I want to have itchy fingers, I need approximately 20 bottles of a bad tasting beer and that does not sound so good to me.

SLUG: Tankard have been purveyors of thrash just as long if not longer than some of the mainstays like Kreator, Sodom and Destruction. What do you think sets Tankard’s music apart from other German thrash metal bands or any thrash metal band for that matter?

Olaf: We always did it with a blinking eye if you read some of our lyrics. As for the music I think that our song structures are easier and closer to punk rock and we don’t take ourselves too seriously.

SLUG: Tankard doesn’t just sing about beer—you have war, zombies and metal, of course. What is the biggest influence when it comes to writing Tankard’s lyrics?

Olaf: There are nearly no limits to our lyrics and the funny songs about all the beer stuff belongs to us. Sometimes it’s enough to see news on the TV or get some ideas from a radio report or things that happen in our local area. We talk about everything and so I think our lyrics reflect pretty much who we are.

SLUG: Is there a certain beer you suggest for summertime?

Olaf: My very favorite is the so-called “Weizenbier” or “Weissbier,” which is perfect for summertime. I don’t know if you can get it outside of Europe. Erdinger or Schoerrerhofer are exported. If you ever have the chance to get it, don’t hesitate to drink it!!