00:00 / 16:39
Spotify Stitcher
RSS Feed
Share
Link
Embed
Formed by bassist Jared Warren and drummer Coady Willis, Big Business has been deafening fans of all things heavy with their brand of thick, freaky rock n’ roll for nearly a decade. Fresh off a tour of Europe with Unsane, now featuring three members, and armed with a brand new 7", Big Business will be embarking on a US tour this fall. Before their stop in Salt Lake, SLUG spoke with Willis about the band’s  current state of affairs. 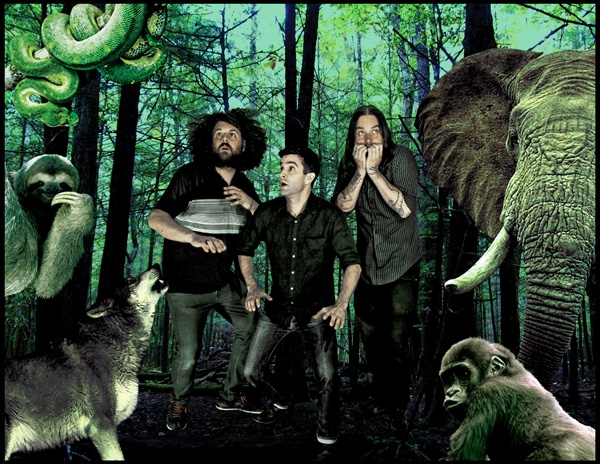 Enter the wild kindgom of Big Business as they bring their earsplitting sounds to Urban Lounge on Sept. 9. Photo: Scott Martin

Formed by bassist Jared Warren and drummer Coady Willis, Big Business has been deafening fans of all things heavy with their brand of thick, freaky rock n’ roll for nearly a decade. The duo so impressed legendary sludge purveyors The Melvins that the mightily afro-ed Buzz Osborne invited them into the ranks of the band, where they have been serving as part of the rhythm section since 2006. Fresh off a tour of Europe with Unsane and now featuring three members, Big Business will be embarking on a US tour this fall. They also recently recorded a 7” featuring the original song “Wild Kingdom” and a cover of Siouxsie & The Banshees’ “Into the Light,” which is only available on their current tour. Before their stop in Salt Lake, SLUG spoke with Willis about the band’s  current state of affairs.

SLUG: You and Jared are also members of The Melvins, who are a full-time touring and recording band. How does your time in The Melvins affect how active you can be with Big Business?
Willis: It does make it a little harder to write new stuff. Jared and I are definitely into making it a priority to make Big Business our main thing. We’re still doing The Melvins, but they also have their new project, Melvins Lite, going on, so we’re hoping that with all of these projects everyone is gonna be able to do all that they wanna do. We’re also super excited about our new guitar player, Scott Martin. The new songs we’ve been writing are really exciting—we’re on a new level.

SLUG: How did Scott come to be a member of Big Business?
Willis: We brought him in right before we recorded the Quadruple Single EP, mostly because our previous guitarist, Toshi Kasai, who is a recording engineer, was getting busier. It got to a point where Toshi had to step down and focus on his recording career. Scott has a really good sensibility that fits with Big Business. His background and the kind of music he likes is really copacetic with Jared and myself, so he took right to it. I don’t wanna say that it’s “effortless,” but everything is coming very naturally right now.

SLUG: Now that Big Business has been around for almost 10 years and you’ve incorporated some new members, how do you think your songwriting has changed?
Willis: Scott is actually doing some singing as well—we’re trying to leave more room in the songs to make singing more fun. When we first started the band, it was just Jared and I, so we had to cover a lot of ground with our instruments. We never really got to sit with a guitar player for too long. Every time you bring someone new in, it takes a while to figure out how they fit into the band and to write songs where they’re fully included in the process. Now, the songwriting is coming more fluidly. We’re trying to write songs that are fun to listen to, but more importantly, are fun to play live. Jared’s vocals and Scott’s are a strong point in our band … We’re not trying to shoehorn that stuff into the arrangements, but rather [to build] songs around them.

SLUG: The Quadruple Single EP and the Wild Kingdom 7” have both been released on the band’s own label, Gold Metal Records. Why did you guys decide to start a label?
Willis: It just made sense. Sometimes labels try to market your band in a way you don’t agree with or spend money to promote the band in ways that don’t make sense. We’ve been around the block enough times to know what works for us and how we want to promote ourselves. We just wanna make the records we want our own way. It is extra work and everything, but it has been really fun. Scott is a very gifted graphic design artist, and he’s designed both of the Gold Metal releases so far and has been helping a lot with our imagery, so we’re lucky to be able to incorporate his skillset in that way as well.

SLUG: You guys are often lumped into various genres and sub-genres of heavy or aggressive music, but I’ve read in previous interviews that you don’t typically like to be classified. How would you describe the kind of music that Big Business make?
Willis: Really loud, weird rock. For us, there aren’t really any rules about where we fit. We like a lot of that stoner rock stuff, but we also have a lot of pop sensibility—there’s room for all of that in our sound. That’s one thing I’ve learned from The Melvins: You can cut and paste from so many different styles to create something new. It’s still loud, crazy, distorted rock music, but I don’t think anybody likes being pigeonholed as a person or as an artist—you like to think that what you do is unique and special. I guess time will tell.

Big Business will bring their dense, delirious rock to SLC on Sept. 9 at Urban Lounge with locals Cornered By Zombies and Worst Friends. Bring your earplugs.