SLUG Mag Soundwaves
Episode #403 – Mykah
00:00 / 21:59
Spotify Stitcher
RSS Feed
Share
Link
Embed
Last fall, Black Tusk broke forth from the swamps of Savannah, Ga. once again to unleash their fourth album, Set The Dial, upon the world.Black Tusk have become known for combining various aspects of aggressive music and filtering them through their Southern roots to create a style of metal as crushing as it is fun. “I don’t just listen to metal music by any means. That’s why we don’t just sound metal all the time,” says drummer James May. “We don’t hang out in graveyards or worship the devil. We just do it in a fun way.” 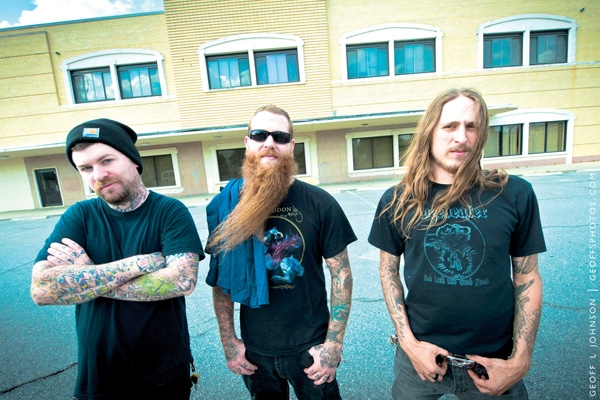 Last fall, Black Tusk broke forth from the swamps of Savannah, Ga. once again to unleash their fourth album, Set The Dial, upon the world. The album begins with the instrumental track, “Brewing The Storm,” indebted not so much to their Southern metal brethren as it is to the ‘70s rock swagger of Thin Lizzy and ZZ Top. On the album’s second track, “Bring Me Darkness,” guitarist Andrew Fidler shouts “SIX! SIX! SIX!” repeatedly at the top of his lungs, and the party really begins. Black Tusk have become known for combining various aspects of aggressive music, whether it be stoner, sludge, thrash or punk, and filtering them through their Southern roots to create a style of metal as crushing as it is fun. “I don’t just listen to metal music by any means. That’s why we don’t just sound metal all the time,” says drummer James May. “We don’t hang out in graveyards or worship the devil. We just do it in a fun way.”

I spoke with May the day before Black Tusk headed out on their fall tour, which will stop in Salt Lake City on Nov. 20 with Red Fang and Indian Handcrafts. As his bandmates—Fidler and bassist Jonathan Athon—loaded the van, which they had been working on since 7:30 that morning, May took a break to answer my questions with his amiable Southern accent. It’s hard to ignore the inherent Southerness of Black Tusk and the style of music they play—after all, Georgia is also home to Baroness, Kylesa and Mastodon, who have infused various levels of swamp-inspired boogie into their music throughout their careers. “We are from the South … It definitely comes out in what we do. You can’t change that part of someone when they’ve lived here forever,” May says. There is a definite groove to Black Tusk’s music, a driving sense of coolness that could only come from the South, and it is part of what makes their sound so inviting, not only to dedicated metalheads, but to metal outsiders as well.

Another key aspect to Black Tusk’s appeal is their live shows, which May aptly describes as, “Sweaty, loud and very energetic—the way it should be when you go see a good show.” Even though Black Tusk only contains three members, they put all of themselves into their live performances. As Fidler and Athon occupy the front of the stage, beards and hair a-flyin’, May manically pounds the drums behind them, all three of them shouting out lyrics at various points throughout the set. “Playing drums and singing isn’t the easiest thing in the world,” May says. “When you only have three people in a band, though, you have to make up for it with a big sound and doing more with what you have.”

Black Tusk’s fall tour will reunite them with Red Fang, with whom they toured Europe earlier this year. “We hit it off real good with that band. They’re one of the coolest bands we’ve ever toured with,” May says. Apart from their coincidentally similar names, Black Tusk and Red Fang seem like perfect tourmates—heavy as hell, but fun as fuck. This tour follows the longest break Black Tusk has had since releasing Set The Dial last October. “We hit it hard touring on this album. I don’t think we’d ever be home for more than two weeks before we were out again promoting it,” May says. “We thought about staying home and writing a new album, but then this Red Fang tour came up and we thought, ‘Yeah, we’re definitely gonna do this one.’”

Even though the band has been road warriors for nearly a year, they still found time to record and release a split 7” with their fellow Savannah swamp dwellers, Dead Yet?. May and the singer of Dead Yet? had previously been in a band, and when the members of Black Tusk noticed that Dead Yet? began to pick up steam in their hometown, they decided to team up for a decidedly diverse split release. “We’ve been friends with those guys forever. They’re a punk band, so we thought it would be cool to do a split with a band that wasn’t just another metal band,” May says. “Since we all live in Savannah, we kept it all local, with a Savannah artist doing the cover art and put it out on a Savannah label.”

When I asked May if he had any fond memories or special connection to Salt Lake City, since Black Tusk rolls through town so often, he told me the one thing that has become all too common in the between-song banter from touring bands in our city: The alcohol content of our beer sucks. However, May was happy to report a group of good Samaritans (or perhaps bad Samaritans) in our fair city. “The past three times we’ve been in Salt Lake, someone has always showed up and hooked us up with good beer,” he says.

Come to the Urban Lounge on Nov. 20 to see Black Tusk unleash their Southern boogie storm upon the denizens of Salt Lake City with Indian Handcrafts and headliners Red Fang. While you’re at it, buy the band a few beers—bonus points if you introduce them to our high-point, non-shitty local craft beers.