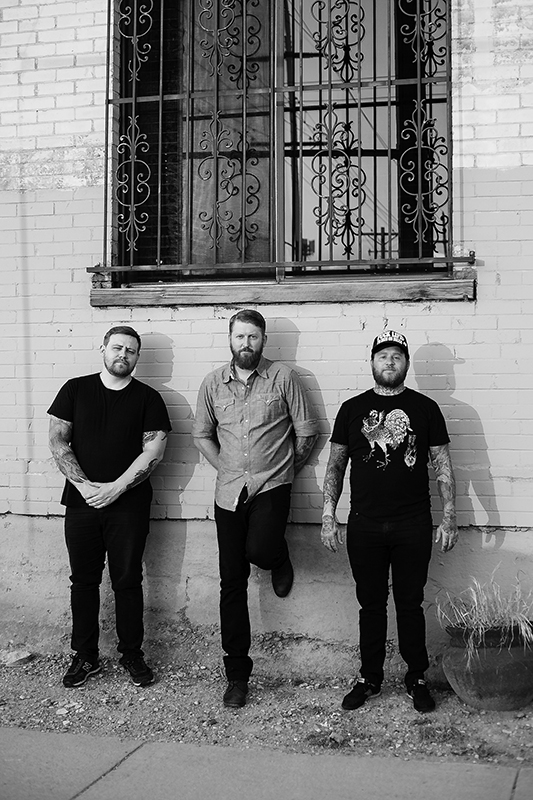 Until the Body Quits: The Ditch and the Delta Sign to Prosthetic Records

“Lots of persistence,” says Ditch and the Delta drummer Charles Bogus after I asked what it took to get signed to Prosthetic Records. Guitarist and vocalist Elliot Secrist and bassist and vocalist Kory Quist detail the legwork it took to get their music to any metal blogger that would give them a review: “All our P.R.[-related attention] we’d ever gotten was because Kory and I emailed the shit out of any person that did any metal blogs,” Secrist says. With their We Rust EP in 2013 and first full-length Hives in Decline under their belt, the three-piece has torn into the world of heavy music, and as of 2017, officially joined the heavily stacked catalog of the Prosthetic roster.

In the winter of 2013, Secrist (Parallax, God’s Revolver), Quist (Nine Worlds, Making Fuck) and Bogus (Maraloka, Parallax) came together through consensual rage and frustration that projected conjoining elements of sludge and doom metal, late-’90s hardcore and Secrist’s academic knowledge of jazz composition—they are very much their own sonic entity. “I could figure out a chord or something I liked on a record, but I didn’t spend a lot of time figuring out other people’s music,” says Secrist. “Through us, a lot of people’s music sounds similar, but I’ve never directly figured out people’s techniques.”

Aside from learning their instruments by listening to the rosters of Relapse and Hydra Head Records as well as local greats such as Iceburn and Eagle Twin, Secrist employs his degree in jazz composition to create unique scale structures, key changes and dissonant guitar leads that sound “half in and half out.” However, with the onslaught of technical capabilities, the band still maintains the songs’ emotional output. Ditch and the Delta are abrasive and coarse like hardcore, but have softer melodic undertones adjunct to the slow, pounding sludge metal-like riffs that accentuate the sheer ferocity of their music. “I feel like we fit in the middle—we’re not a slow, doom band,” says Secrist. “My brain goes too quick to sit on a riff for that long.”

The polychromatic intricacies of their sound echo the love/hate relationship of living in Utah. “Living here, you’re always surrounded by the culture and immersed in it, so even if it’s not intentional, it will always come through,” says Bogus. The imagery in songs like “We Rust” and “Open Veins” depict the pressure and gravity of Utah’s natural basins and valleys, which uncannily exemplifies the emotions that often surface from living here. “Music is art and an imitation of life, so we’re regurgitating everything we’ve taken in our whole lives,” says Quist.

Lyrically, Secrist’s endless frustration brought out scorchers like “Mud” and “Fuck on Asphalt.” The latter is a commentary on the childish mindsets often presented by men who feel threatened by women who speak their minds. “When I came up with the title, I was just trying to paint a picture [with words],” says Secrist, “and the more I read it, I noticed that this message about these man-children was finding its way through.” “Mud” details a more personal story of Secrist’s disdain with the Mormon faith and the effect it had on his mother. “After her Patriarchal Blessing, she was told to pay attention to her dreams and acted upon them no matter how weird they were,” says Secrist. “After a failed suicide attempt fried her frontal lobe, she started seeing everything as a prophecy. I fully blame religious guilt and the pressure of going to Hell that it puts on people.”

With their plethora of unique songwriting both lyrically and musically, Ditch and the Delta, as mentioned, had to perform a lot of legwork both digitally and physically in getting their music out to people who’d review it. Big-name metal blogs such as MetalSucks, Decibel and Metal Injection as well as reposts from bloggers as far as Greece, Czech Republic and the U.K. have expressed their enjoyment of Hives in Decline. “I emailed the AR guy [at Prosthetic] the demo of the LP,” says Quist. “He liked it, but the owner didn’t. Then I sent it to him again after it was released, and I was like, ‘What about now? Every review we’ve had are saying we’re awesome.’ And they’re like, ‘Yeah, we’ll count this as your first record and we’ll sign you for two more.” While Prosthetic is a well-known label with big acts on its roster, the band still has to work to keep the ball rolling. “While on tour, we make enough for gas night to night,” says Secrist. “We’re definitely putting more in than we are taking out, which is fine because it’s fun, but we’re hoping eventually we can make it to do a tour and come home with money in the pocket to pay rent and not go back to work.”

While it’s still too early to conceive what is in store for Ditch and the Delta, they remain optimistic about their future with Prosthetic Records. “The U.K. headquarters for Prosthetic is really stoked on our new album,” says Secrist, “so maybe going to Europe is in the near future.” With all the positive feedback they’ve gotten so far, things seem to be moving in the right direction for Ditch and the Delta. “We just want to push it as far as we can and use this deal as a vehicle for that,” says Bogus. “After this record, we will have two more with Prosthetic, and we hope to just keep the ball rolling.”