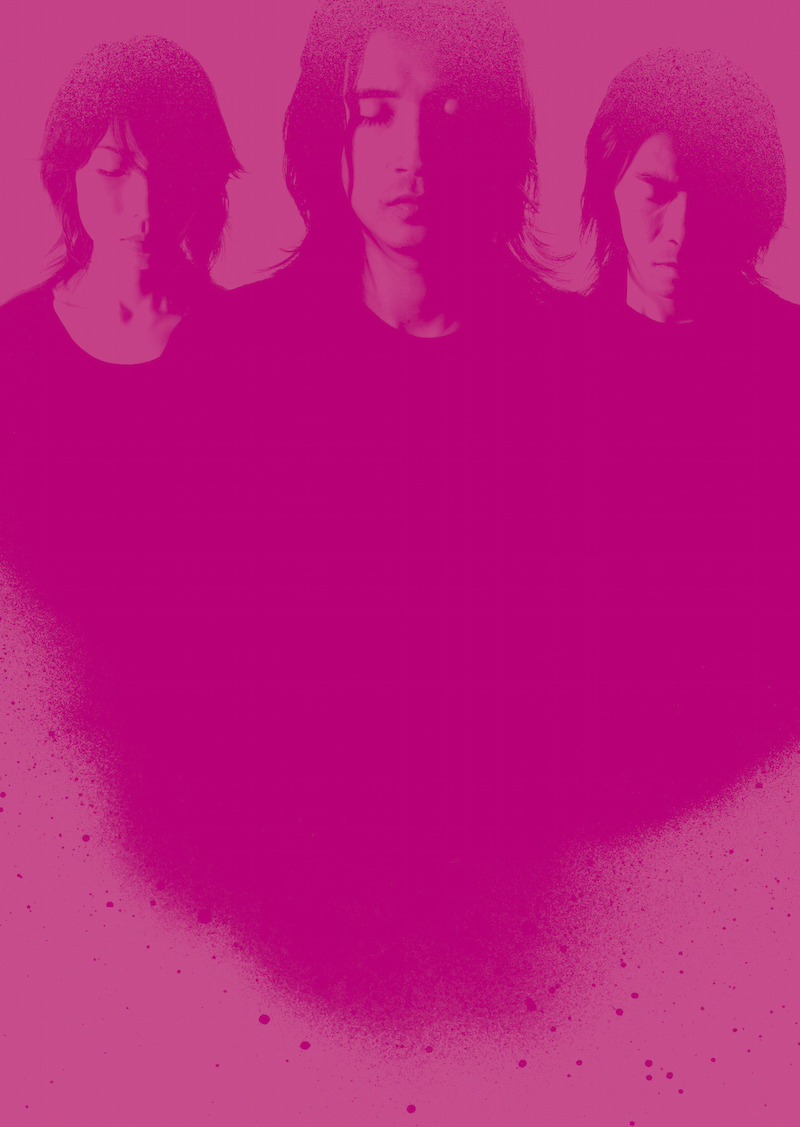 There are few bands as complex, as prolific, as weird and as amazing as Boris. The Japanese trio—Atsuo, Takeshi and Wata—has released over 20 albums since 1992 and have collaborated with drone titans Sunn O))), noise mastermind Merzbow and moody post-punk vocalist Ian Astbury of The Cult, among others. They are a band that is constantly moving forward, though one that is not afraid to reinterpret their past to do so. Such is the case with the newly reissued PINK, which was their breakthrough album in the Western world in 2006. Combining the hyperactive garage punk of Guitar Wolf with pensive shoegaze and exercises in drone and repetition, it was and is a revolutionary album. In July, Sargent House remastered and reissued the album with a bonus album, Forbidden Songs, which was recorded at the same time as PINK. The band will embark on a US tour in which they will perform the album, including a momentous show on Aug. 20 in SLC. Here, Takeshi elucidates the re-release of PINK as not only a documentary of the band’s history, but also a look to Boris’ future.

SLUG: There has been an increasing trend in “anniversary” reissues over the past few years. What were some of the factors that led to you wanting to reissue PINK?

Boris: We had just switched labels in the USA, and the old edition had gone out of print. The 10-year anniversary was good timing to do a reissue. The vinyl version had originally been released in limited quantities, and even though there were a lot of people who wanted a copy, it had always been hard to find.

I think that with the popularization of the internet, there has been a strong tendency for people to take history and context too lightly. So, we have begun to feel that chronicling our journey into an easily accessible format is another important aspect of our work.

SLUG: PINK is still held in very high regard by fans—copies of the original vinyl version are still hard to come by (I paid $40 for my copy almost five years ago!). What do you think it is about this album that draws fans to it?

Boris: Currently, it is often said that vinyl is trending right now, but we have been releasing vinyl since way before that. So naturally, there are going to be things that are hard to get ahold of. We really can feel how true lovers of music have been supporting us all along the way.

Since 2003, we had been regularly touring overseas, which had really increased our pace of life as a band. PINK was released at a time when we were becoming more and more busy, and as we were seeing so many different places in the world, we were all changing at a really rapid pace. When you consider that, I think it makes it a kind of interesting documentary piece. Even for us, it is still contains a lot of mysteries we haven’t figured out yet—I think it contains a lot of the “magic” of rock.

SLUG: Along with the reissue, Boris is also releasing Forbidden Songs, which was recorded at the same time. Why have these songs not been released beforehand? What kept some of these songs off the original tracklist of PINK?

Boris: Like I just mentioned, we had been touring a lot at the time, and it was a time where we really came to see what we needed to be doing. When we edited PINK, we made the choice to include only the sounds that nobody but us could make. All the tracks on Forbidden Songs are the ones that we felt seemed to be obviously influenced by something, and therefore, we removed them.

Actually, the conditions under which it was recorded weren’t very good, and many tracks were not actually completed. Post-production technology has come a long way since that time, so that enabled a number of tracks to be released.

SLUG: Boris are a very prolific band—this year has already seen a number of Boris releases. Do you find it limiting to be playing the PINK album during your upcoming US tour?

Boris: This PINK re-release tour was suggested to us by our booking agent two years ago. At the time, we immediately said, “We won’t do it” and turned it down. We always want to be creating new work, and we’ve already finished recording a new album. But as I said at the beginning, we feel that properly showing the path that we have treaded is another important part of our work. I think keeping our history in order will help lead us to even better work in the future. I think our way of making sound has changed a lot in the last 10 years. There was a period where we had four members onstage when we played live. Now, when we play PINK as the three of us, it is going to change it in our current sound.

I really don’t think it is a recreation of the past. We are playing some songs we didn’t perform in the original tour, including material from Forbidden Songs, so I think audiences who are familiar with how it was at the time it was originally released will be able to enjoy it, too.

SLUG: Boris have many recorded works that have never been released outside of Japan. How does the band decide what material to release where?

Boris: Everything we create is a documentary of the band at the time. So for every release, there is the connection between us and the people we came into contact with at the time. That is an incredibly important aspect for us. It influences the album and the individual songs.

Our intent is to make music, so if we just prioritized making everything easy to obtain, than we would just be making products to sell. Think about it this way. Imagine you had brought lots of little children into the world, and these children would all have different people in their life that lead them to leave the nest in different ways. Maybe some children would see  it fit to go live in the city, but some children would dwell quietly in the countryside. We, as the parents, can’t completely control what they do.

SLUG: Boris constantly introduce new elements into their sound, yet the band also revisits old material often. How do you balance the band’s progressive tendencies with the nostalgia of classic material?

Boris: No, we are always making new things—we have no time to waste being bogged down in nostalgia. I feel like we are constantly ascending a spiral staircase. Recently, we have had an increasing number of slow, heavy songs in our new work, but compared to the past, the feel is completely different. We are always looking ahead into the future.

SLUG: Earlier this year, Boris released Gensho, a collaboration with Merzbow featuring new interpretations of previously recorded Boris songs. How did you decide which songs to include?

Boris: I think it is most interesting for us to play our most representative work when we collaborate with Merzbow. It makes us happy if the listeners will be able to experience the familiar form of a song they know being broken down and liquefied. We have no interest in doing a show that is just boring, tedious chaos. But I feel that the melee of the symbolic elements of rock all fucking about with each other is really beautiful.

SLUG: Gensho sprang from a live concert with Merzbow, and he is someone Boris has collaborated with frequently. What is it like working with him after all these years?

Boris: It is very thrilling and fun for us every time we work with Merzbow (aka Masami Akita). This time, we handed over the recordings to him and he created tracks to match what we gave him. So, while the discs may have been different, the feeling of a combined performance was there.

Boris: Working as a band is not really so much a business as it is our lifework. So the people we meet are very important to us. We have never done anything like come up with some sort of business idea and then work to execute it. We have done this all on friendship and the people we meet. I think that meaningful collaborations happen when you have the kind of empathy and mutual respect that is born from relationships with people that you meet unexpectedly and when you truly resonate with someone and the music they have. I am sure that we may end up working with someone collaboratively again in the future if the time is right.

Boris will perform PINK in Salt Lake City at Urban Lounge on Aug. 20. Earth and Shitstorm will open the show.