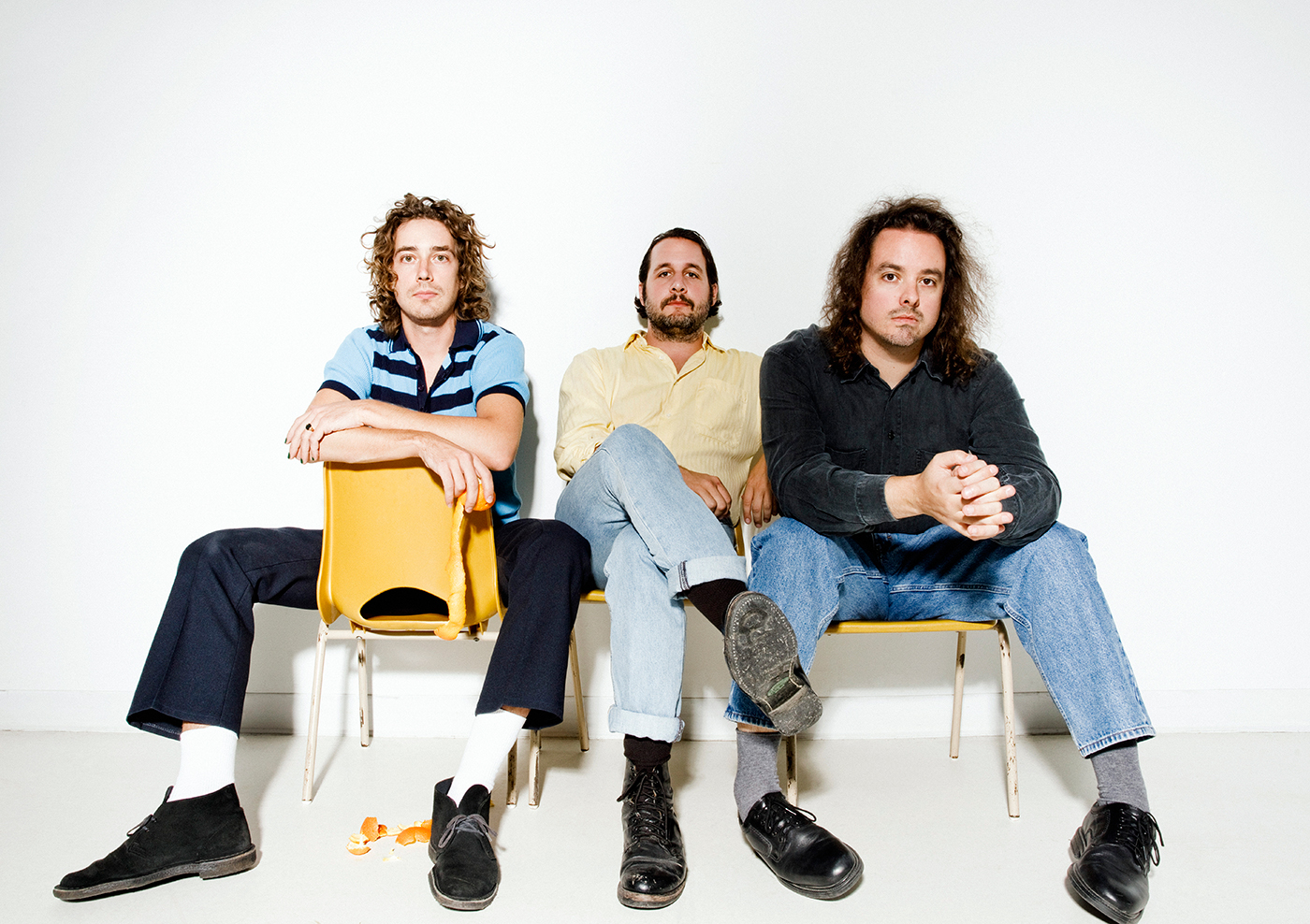 When Born Ruffians’ sixth studio album JUICE was set free into a pandemic-frenzied world on April 3, lead singer Luke Lalonde was social distancing inside his home in Toronto, safe but separated from his bandmates of over 15 years. “We’re gonna meet up on a group video chat and have a beer together tonight,” Lalonde says to me over the phone that afternoon. “I remember writing ‘Breathe’ in my room and sending the demo to Mitch and Steve probably four or five years ago. Some of the songs [on this album] have been kicking around for a long time, so it feels great to have them out.”

When he isn’t playing Animal Crossing or removing shoes from the jowls of his new puppy—an Indian pariah dog named Putty—Lalonde has been spending his self-isolation period covering songs that have, in one way or another, made him the musician he is today. “I haven’t been writing a ton,” he says, “But sometimes learning other songs is a great way to spur ideas and learn new chord progressions.” Over the last few weeks, Lalonde has covered songs such as “Run of the Mill” by George Harrison, Bob Dylan’s “Mama, You’ve Been On My Mind” and “Far From Me” by the late John Prine, each recorded in his home in front of a frondy houseplant and tiled fireplace before being uploaded to Born Ruffians’ Instagram profile.

“Some of the songs [on this album] have been kicking around for a long time, so it feels great to have them out.”

“I once heard John Mulaney, the comedian, tell Conan O’Brien how much he influenced his sense of humor by saying, ‘Your show got in there before the garage door closed.’ Those early influences get locked in your brain,” Lalonde says. “Those songs are a perpetual influence on everything that we do [as a band].” And as for Lalonde’s modern musical inspirations? “Big Thief,” he gushes. “I think Adrianne Lenker is, to me, one of the best songwriters and best poets living right now. Her lyrics are just incredible, so many of her songs make me cry every time I hear them. I’ll also always love Parquet Courts.”

I have to admit, watching Lalonde sing “Run of the Mill” in his bathrobe and bright red beret certainly made my 14th day of self-isolation feel a little less hopeless. I’m even more entertained by the quarantine activity of Born Ruffians’ bass player Mitch DeRosier, however—or “Brother Mitch,” as he’s referred to in the music video for the song “Dedication.” In this infomercial parody of a music video, all three members of Born Ruffians are caked in full face makeup with microphones taped to their cheeks. They’re jumping and yelling about Juice, a cure-all product that looks like the pastel-green slime every 9-year-old in America has recently started selling online.

“Those songs are a perpetual influence on everything that we do [as a band].”

“One of the ideas we had was to activate the 1-800 number on the screen as an actual number that people could call,” Lalonde says. “Mitch has been editing the voicemails fans have been leaving into this Adult Swim-caliber mini-show and uploading them to our social media.” These comically deranged “Variety Hour” clips, as well as the “Dedication” infomercial, were inspired in part by The Jim Bakker Show (“He’s a televangelist who went to prison for fraud and now he has another TV show where he sells food and apocalypse supplies to people,” Lalonde says and fills me in, as I had never heard of him before), as well as ShamWow and other classic infomercials such as the Magic Bullet.

When I ask about Lalonde’s favorite track on the new album, he answers without much hesitation: “Probably ‘Wavy Haze.’ I could play that song for the rest of my life and always be able to feel something when I play it, which is special.” The track is a meditation on Lalonde’s own nostalgia, a nod to Born Ruffians’ early days as a band. “Microwave a Hungry Man / Barbasol and 50 cans / Acne-prone anxiety attacks … Was it what it seems / In that wavy haze?” he asks on the track.

“I could play [“Wavy Haze”] for the rest of my life and always be able to feel something when I play it, which is special.”

“Wavy Haze” is, not coincidentally, the namesake of the band’s new label Wavy Hazy Records, which JUICE is the first album to grace. Lalonde says creating their own label wasn’t considered an option until recently, when their 10-year contract ran out with the Canadian label Paper Bag Records. “It’s a bit of an experiment,” Lalonde says, “But I think a lot of bands or artists look forward to a day when they can take more control of what they’re doing. We’re just taking it slow and putting our own stuff out right now, but so far it’s great.”

What else can Born Ruffians fans look forward to in the future? If you call 1-855-909-0280 and listen closely, you just might hear a hint. Oh, and leave them a message while you’re at it—Brother Mitch needs more Variety Hour content. Between watching that and listening to JUICE on repeat, I think I’ll be able to wait out this pandemic without going insane. “If only I had a puppy to keep me company,” I say longingly near the end of our conversation. “Yeah, the timing of getting Putty  couldn’t have been better. Not trying to gloat about it, but she’s pretty great,” Lalonde says. Spoken like a true puppy dad.