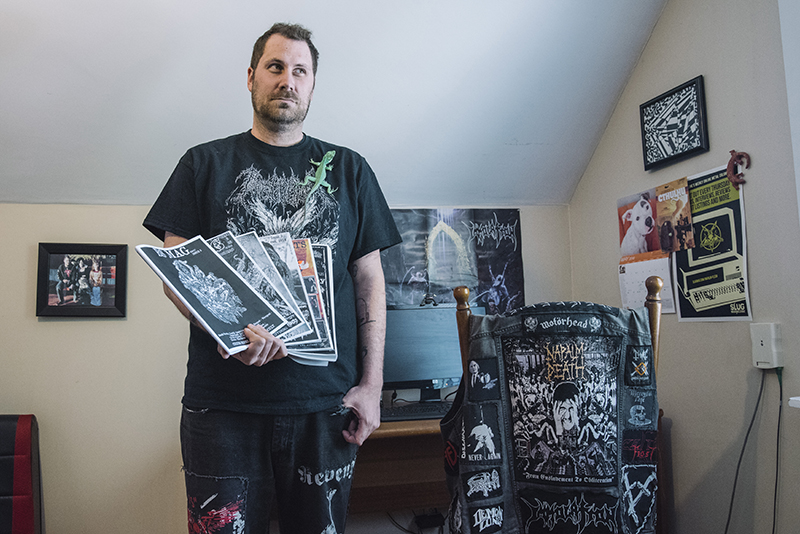 Don’t be fooled by the title. BS Mag contains a lot of shit in its pages—features with established acts such as Immolation and Napalm Death and bands like Darklord and Communionist from the local scene, and even reviews of the latest, terrible horror movies—but it does not contain bullshit. As one of SLUG Magazine’s most established and prolific metal writers, Bryer Wharton trekked to create a zine of all things metal. Very much like his approach to BS Mag, Wharton is someone who takes time with his words and is to the point. As we sat in the den of his home, the walls plastered with posters of metal bands and horror movies, he regaled me of how BS Mag came to be.

SLUG: When did you initially make the decision to start your own zine? What propelled you to do so?

Bryer Wharton: Ironically, the idea came out of something I was doing for SLUG—they had a weekly, online metal blog that I was in charge of. It was fun at first but then it became a lot of work. I started thinking [back to when] I was 15 or 16. In the infancy of the internet, I read a lot of zines, and that’s how I found out about bands I like. So I was thinking I should do that, just for fun. It’s kind of a niche, and I don’t know what I’m doing at all because I have very little design experience. I decided to just go for it, thinking it’ll be a fun little hobby and go back to the days of the print zines.

SLUG: When you got BS Mag started, who was all involved and where did the name come from?

Wharton: The very first issue was just me. By the third or fourth issue, we started with some reviewers that wanted to do stuff and slowly started to get more collaborators and contributions. Originally, it was called Burning Salts Mag. I think with that, I was trying to be weirdly poetic like “Salt Lake is burning!” It sounded interesting but then I decided I didn’t like that, so I just abbreviated it.

SLUG: BS Mag also includes reviews of horror movies, and while they stray away from the music, the spirits of metal and horror movies go hand in hand. Will there be any other inclusions of this caliber within the pages of BS? If so what are they?

Wharton: I’m not against it. I’ve had two artist profiles: one on Gabriel F. Danilchik in Issue 6 and another on Patrick Kendell, who did horror-themed art. I’ve also thought about doing tattoo-artist profiles. I’ve had people contact me out of the blue, but most of the stuff I have to hunt down. That is a big weakness of mine that I would like to figure out more is networking and marketing. One thing that would be really fun is down the road, going with the horror movies, interviewing filmmakers and actors and get in that realm to mix it up a bit. I’ve been into horror movies as long as metal music, so there’s always been similar interests.

SLUG: Whom do you have all contributing on BS Mag? Do plan to bring in more contributors?

Wharton: I think the biggest contributor I’ve had, and I hope he still continues, is Elde (Erickson). There’s also Mike Cadaver, who does the “Savage Movie Reviews” in the zine. I would get more satisfaction if I had more collaborators.

Wharton: No idea. We’ll see how the summer goes. I’m also picky. I think that’s why one of the reasons Issue 6 took so long was because I wanted bands that I thought were interesting and kind of new or have a new album that is good as opposed to just going with what’s popular. The weird thing is I don’t get a lot of feedback, but that happens in writing a lot.

SLUG: How often do your issues come out?

Wharton: One a year maybe, if not less. I don’t really stick to a schedule, but I do like to take a break when I’m done with one issue. This last one took over a year. I was realizing that I had done the Napalm Death and Immolation features in 2016—I was reading over them and making sure what was still relevant. I set my own deadline. Sometimes finding motivation is hard because of life, and it’s this double-edged sword. On one hand I do it because I really like writing and talking to artists that I enjoy to exercise my creativity and using my brain, but on the other hand, I oddly beat myself up like, “It doesn’t matter; nobody reads it; why should I do it?” I think everyone has that thought: “Is anyone going to care about this? Am I the only one that’s going to read this?” But when it’s all said and done, I think that your most important reader is yourself. I know it’s purposeful to write towards an audience, but you should first write for yourself.

Issue 6 of BS Mag is available for purchase at The Heavy Metal Shop, Raunch Records and any Graywhale Entertainment store, so all you metalheads in SLC better pick up a copy if you haven’t already. And, if you are a writer and lover of the dark, dreary and heavy, BS Mag is looking for any and all contributors to join their cult.