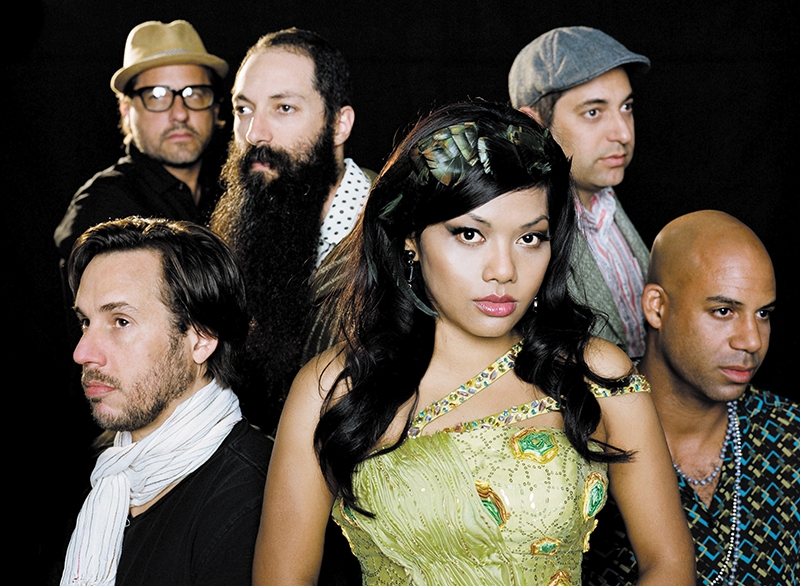 Dengue Fever’s sound is a sonic masala of influences including surf, Afrobeat, hip-hop, punk, and, the Rosetta Stone to their sound, Cambodian pop. On their latest, self-released album, The Deepest Lake, Dengue Fever were in total control of the entire experience, from the music to the packaging. This attention to handcrafted detail is expressed not only in their packaging but in the exquisite fineness of the recording. Before their April 10 performance at Kilby Court, SLUG caught up with Dengue Fever to explore the history and resurgence of Cambodian pop and its influence on their unique style of post-global music. “I think we have shed some light on this body of music, but we can’t take the credit for reviving it, singlehandedly,” Dengue Fever drummer Paul Smitah says of the band’s role in this resurgence. “It was a moment in time that should be sifted through and enjoyed.”

During the Vietnam War, broadcast radio brought American and British popular music from the ’50s, ‘60s and ’70s over to Southeast Asia. This music was reinterpreted by Cambodian pop artists who combined the swirling, psychedelic sounds of rock n’ roll with traditional Cambodian singing—an inhuman range that slurs vowels into dog-whistle highs. Sin Sisamuth and Ros Sereysothea became some of the biggest stars in the nascent Khmer rock (Khmer referring to the principal ethnic group in Cambodia, often used as a catch-all for Cambodian culture—not to be confused with the short-lived Khmer Rouge regime referenced in this article). Sadly, they remained undiscovered treasures to the Western world. In 1975, Pol Pot and the Khmer Rouge regime came to power, leading to the Cambodian genocide and a purging of the country from all foreign influences—including Western music. Cambodia’s biggest stars were presumably executed along with the music they created.

Still, as great art tends to do, recordings of these artists persisted through Pol Pot’s reign. Cassette and vinyl recordings of these Cambodian pop songs were what Dengue Fever co-founder Ethan Holtzman discovered on his travels through Cambodia. After returning to L.A., Ethan and his brother, Zac Holtzman, who had also caught the Cambodian fever (the fever of Cambodian pop—not the actual dengue fever), started a band with the intention of maximizing Cambodian pop’s psychedelic potential with traditional Cambodian vocals. The newly formed band met Cambodian singer Chhom Nimol—already an established karaoke singer in Cambodia—in a nightclub in the Little Phnom Phon area of Long Beach, Calif., and the die was cast. Smith stated that he felt immediately drawn to Cambodian rock because it “had that rock-and-R&B mash-up, but the melodies felt new and exciting,” he says. “It very much belongs to the ’60s music scene, but also has an ancient quality at the same time.”

This exploration into Eastern and Western intersections has gained Dengue Fever fans in America and Cambodia, where the terror of the Khmer Rouge of old looms large in the collective history of the country. In 2005, Dengue Fever toured Cambodia and received an overwhelmingly warm reception of their unearthing of Cambodian hits. “Playing in Cambodia really tied it all together in some ways,” says Smith. “Their response was nothing but positive. They loved seeing Westerners play their classics. It seemed to have a slightly therapeutic effect on some people, which was really cool to see.”

That therapeutic effect, it can be speculated, came from Cambodians seeing and hearing live music that was almost snuffed out through the brutal measures of the Pol Pot regime, resurrected and championed as a uniquely Cambodian contribution to the world of popular music—a sense of pride for a near-forgotten heritage. By uncovering the sounds of Khmer rock and adding them to the sum of the human musical experience, Cambodia’s cultural exports have entered into the ever-expanding oeuvre of human musical interaction. Smith says, “Humans have created a lot of beautiful things throughout time, and some of those things came from the Khmer culture and just happened to be stored on vinyl discs.” Smith acknowledges that there have been a few Cambodian artists who have formed and have cited Dengue Fever as an influence, but he is quick to point out that those bands are pioneers in their own right, putting a new spin on Cambodian pop.

Dengue Fever’s newest record, The Deepest Lake, was released on Jan. 27 on Dengue Fever’s label, Tuk Tuk. For their newest album, Dengue Fever was inspired by the female/male push-and-pull of bands like the legendary L.A. punk group X, the relatively recent inclusion of percussionist Nappy G, who rounds out the group’s explorations into trance-inducing Afrobeat, and by the experience of playing near Lake Baikal in Serbia—the deepest lake on the planet—and the metaphor of depth that exists in the limitless nature of musical influences. Smith stated that this metaphor of a “deep well from which to draw from” could be pulled from “a sense of endless discovery, which is kind of what draws some people into music.” Be drawn into Dengue Fever’s performance on April 10 at Kilby Court.