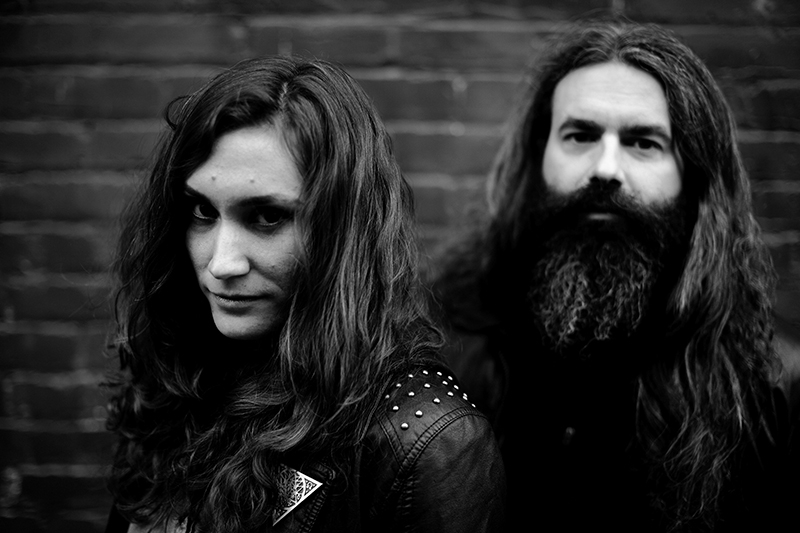 Castle’s eerie aesthetic lures you into a blackened moor, your only comfort, a cloak pulled tightly around your body. The bravery in your heart gradually diminishes as the candlelight of your lantern fades into the night. The moon glides from behind a cloud revealing a looming castle in the distance. A putrid stench dances on the wind, brushing your nose as the shadowy, outlined mounds of rotting corpses swell into view along the narrowing path on which you stride. Your hair stands on end as the isolation settles in, and you realize you’ve wandered into a labyrinth with no hope for escape. Castle will deliver this macabre scene at Exigent Records’ Crucialfest 5 on June 19.

The ghostly instrumentals on Castle’s third full-length album, Under Siege (released May 20, 2014, on Prosthetic Records) continued Elizabeth Blackwell’s knack for haunting vocals spinning tales of death, superstition and malevolent ways. Her occult-themed lyrics verbally express the darkness spawned by Mat Davis’ massive, ripping guitar layers and Al McCartney’s mighty drum destruction. “Occultism really just means seeing the world in a different way and using different tools to understand existence, nature and the human position in the world,” Blackwell says. “We just kind of use that as a gateway to express the music and find meaning, because that’s kind of how we live our lives.”

Castle’s unique sound thrives on isolation during the recording process. The doom–heavy metal hybrid distance themselves from any musical distractions come writing and studio time, which ensures that their music is unique to the three creators. “We want to make something organic and something from our own selves and not really be influenced by other people’s sound,” Blackwell says.

She applies the same mentality to her own sound. Her inspiration is generated within, although artists such as David Wayne of Metal Church and Patti Smith inspire a rawness she admires. Blackwell also enjoys the vocal stylings of classic heavy metal singers such as Ronnie James Dio and Rob Halford, but her muse is internal. “It’s more of just being comfortable and having that experience that has really influenced me,” she says. “I just kind of do my own thing and get it out on my own accord.”

Blackwell’s exploration of the highs and lows of her vocal range contribute to the stylistic change on Under Siege from the band’s previous albums. “My singing style has developed into something more powerful, [and] we wanted it to have more soaring vocals,” she says. Blackwell evolves musically from pushing herself as much as possible to achieve the sound that Castle imagines. “We want to use all our strengths, all our power, all our practice, everything we have—we want to push into the music.”

Under Siege progressed from its predecessor, Blacklands, in tempo and melodic complexity, a transformation representative of how the band felt on the road. Blackwell says, “There’s just so much energy and power that we feel when we’re touring—we really wanted to take that and put it into an album.” Castle envisioned the record’s power as being reminiscent of warriors’ battle cries during the seizure of an enemy’s last stronghold, and Blackwell feels that the band’s pursuit was successful. She says that they have received a positive response, and fans of Castle’s past work have been happy to pick up a copy and support the band. “[The band] is also getting new fans and turning them on to our previous albums, or fans of the other albums come out specifically to buy vinyl of our new album, so that’s really cool,” she says.

Though McCartney has performed on every album, he has only been on two tours, the last being Castle’s 2012 tour with Witch Mountain. He inhabits the outlying realms of Toronto, making it difficult to tour with his San Franciscan bandmates. “Al is a crazy-talented drummer, and he and Mat have such a deep history that Mat knows how Al plays and he has written drum parts with Al in mind,” Blackwell says. “We’re so happy to have him on the albums, but I don’t think he’s ever going to come tour with us.” Castle recruits replacements for McCartney from a small pool of qualified drummers when they’re ready to tour.

Castle’s conquest spreads to Salt Lake City’s and Exigent Records’ Crucialfest 5 on June 19. The band sets out to arrest the ears of new fans on their travels. “It’s great to play a festival because I expect there to be a good amount of people and especially to play for other bands,” says Blackwell. They performed for an impressive weeknight crowd last November with Lord Dying, and Blackwell looks forward to this show. Fret not, fans of Blacklands and In Witch Order, Castle will not neglect you. The band plans to slay the festival horde with songs spanning their discography. According to Blackwell, the band rehearses a handful of songs prior to their departure and decides which songs to perform the night of the show. “We have a set of songs [of] what we usually play and kind of pick what we’ve been feeling as a band at that moment on that tour,” Blackwell says.

Castle are set to conquer new European countries in May 2015, followed by their Crucialfest 5 jaunt on June 19 at Area 51 on the 21-plus stage. The band hopes to release a new album by the end of 2015 or the beginning of 2016. Beware—the power of Castle is upon you.